Renowned filmmaker Bharathiraja issued a statement on Tuesday seeking a ban on the Amazon Prime Video series The Family Man 2, for alleged misrepresentation of the Tamil Eelam fighters. 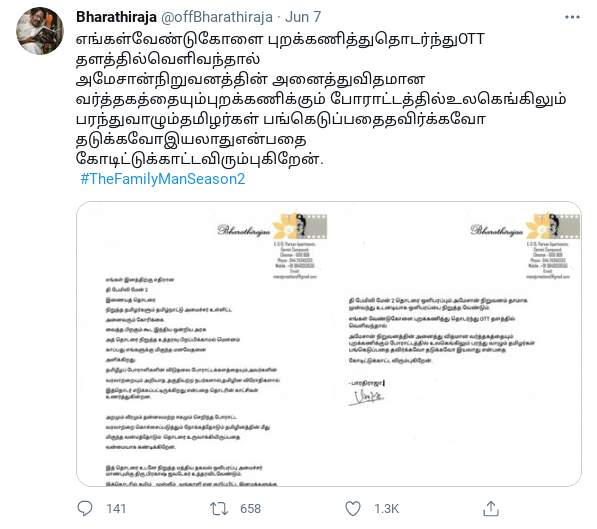 “As we all know, this show continues to show people from Tamil, Muslim and Bengali communities in a bad light,” he added.

Bharathiraja’s statement comes a day after Naam Tamilar Katchi (NTK) chief Seeman too sought a ban of the series with a similar ultimatum. Seeman had said, “Stop Streaming #TheFamilyMan2 web series, else we Thamizhs all over the world may have to lead a Massive Campaign to Boycott all @amazon Services, including Prime Video (sic).” 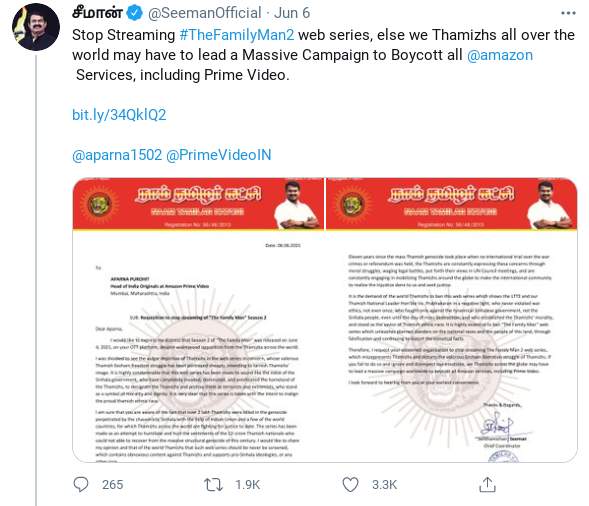 Also read: 'Raji’s story, though fictional, is a tribute to those that died in an unequal war,' says Samantha in an emotional post about The Family Man 2

The Family Man 2, which began streaming on Amazon Prime Video on June 4, stars Manoj Bajpayee, Priyamani and Samantha Akkineni in the lead roles. The series has received a lot of praise from fans and critics.

The controversy began after people interpreted from the trailer that Samantha was playing the role of a leader from the LTTE, and also a “terrorist” in the series. Netizens hit out at the actress and said it was a misrepresentation of what the community had been formed for.

The Liberation Tigers of Tamil Eelam (LTTE) was a guerilla organisation that had sought a separate state in Sri Lanka for Tamil people due to the oppression and bloodshed that was constantly witnessed there.