Actress Bhumi Pednekar took to Instagram on Wednesday to announce that she will once again be sharing screen space with actor Akshay Kumar in the upcoming film Raksha Bandhan.

Announcing that she has now joined the cast for the movie, Bhumi Pednekar posted a photo where she could be seen sitting next to Akshay Kumar and filmmaker Aanand L Rai, with all three of them laughing heartily.

She captioned the image by saying: “A very special film and a very special reunion. Am supremely excited to be collaborating again with two of my favourite creative powerhouses & humans. Am full of gratitude to be a part of this special, heart-touching story.” 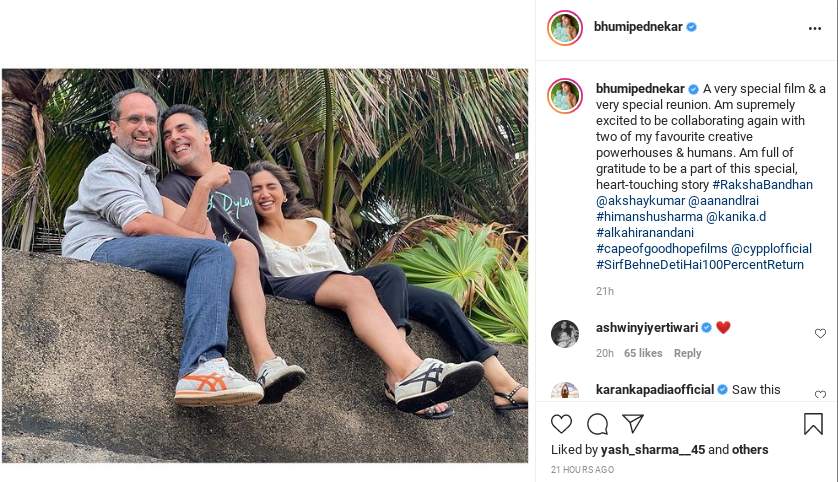 Akshay Kumar too posted the same picture on Instagram and wrote, “When you are happy, it shows. And indeed we are to have @bhumipednekar onboard #RakshaBandhan (sic).”

Akshay Kumar made the announcement about his upcoming film on the occasion of Raksha Bandhan last year on Twitter. He had shared the first look poster of the movie featuring him and four other girls, who are expected to play the role of his sisters in the film.

Akshay also dedicated the movie to his sister Alka Bhatia. The movie, which is directed by Aanand L Rai and written by Himanshu Sharma, revolves around the bond shared by a brother and his sisters.