It's the 8th anniversary of Yeh Jawaani Hai Deewani; here's a look at the characters and dialogues that made this movie special!

Check out the song here:

Fans and celebrities alike have been reminiscing their favourite moments from the film and sending their love for the cast on social media.

Dharma Productions, the producer for the movie, shared a video on Twitter on Monday showing some of the best stills from YJHD in a 45-second clip. The production house wrote as the caption, “Reliving the thrilling and most fulfilling ride of emotions called #YJHD in 45 seconds! #8YearsOfYJHD (sic).” 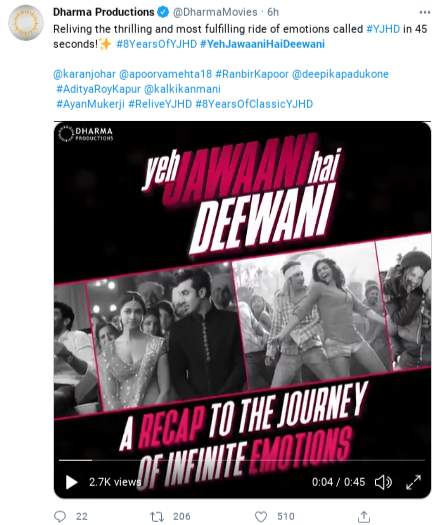 Netizens also shared their favourite dialogues from the movie. Calling the film a “gem”, a user quoted one of Naina’s (Deepika’s) lines from YJHD and wrote, “Jitna bhi try karo Bunny, life mein kuch na kuch toh chootega hi... Toh jaha hai wohi ka maaza lete hai (In life, however hard you try, you will miss something in life, Bunny. So, just live and enjoy the moment). Eight years of the #YehJawaaniHaiDeewani. On this day, 8 years ago, this gem (was) released, which stayed forever and hold(s) a special place in our hearts.” 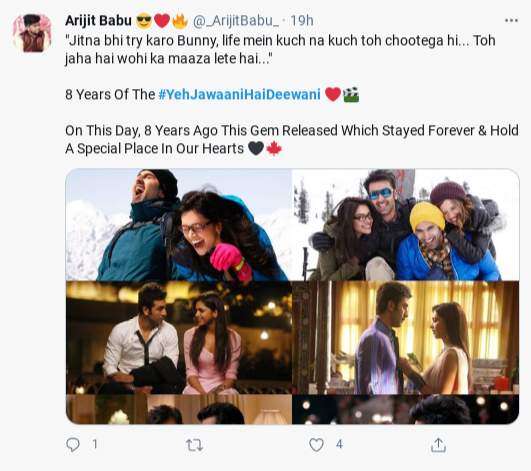 Meanwhile, others shared life lessons that could be picked up from the film. A netizen wrote, “You cannot have it all. Don’t always be on the run after things you desire. Appreciate what you have (sic).” He also attached a picture which had a still of Ranbir and Deepika from the movie, with one of Naina’s quotes written near it. On the work front, one of the lead actors from YJHD, Aditya Roy Kapur will next be seen in the highly anticipated action movie OM. Helmed by Kapil Verma and co-produced by Ahmed Khan, Shaira Khan and Zee Studios, OM is expected to hit theatres later this year.

Aditya portrayed the character of ‘Avinash’ aka ‘Avi’ in YJHD and won the audiences’ heart and approval. Being the most relatable character that came with his own share of weaknesses and shortcomings, ‘Avi’ was that perfect friend who would always have your back and was also a massive flirt at heart. What is incredible is the honesty with which Aditya Roy Kapur played this character of a happy-go-lucky guy and made us all fall in love with it. One of his dialogues which became really popular was, “Saale, apne dollar se mujhe kharid raha hai. Itni sasti nahi hai meri dosti. Mujhe tere paise nahi chaiye Bunny. Daaru pee mere saath.”

Meanwhile, Ranbir Kapoor will soon be seen in Shamshera, a period action drama film set in the 1800s. The story revolves around a dacoit tribe that fought for their rights and independence from the British. Directed by Karan Malhotra, the movie also stars Sanjay Dutt and Vaani Kapoor, and is slated for release on June 25, 2021.

Kalki Koechlin was last seen in the Tamil anthology Paava Kadhaigal, which was released on Netflix in December 2020. Directed by Sudha Kongara, Vetrimaaran, Gautham Vasudev Menon, and Vignesh Shivan, the film talks about how feelings of pride, honour, and sin affect relationships.

Deepika has quite a few projects in her kitty. The actress will next be seen in her husband Ranveer Singh’s upcoming sports drama 83, which is a biography of legendary cricketer Kapil Dev, who was crucial in India winning the World Cup in 1983. She will also be seen in Sidharth Anand’s Pathan alongside Shah Rukh Khan. Yet another upcoming project of hers is the action-thriller film Fighter, which is expected to hit theatres in September 2022. Fighter too is directed by Sidharth Anand and will co-star Hrithik Roshan.