'I absolutely love Selena Gomez but I'm head over heels in love with my wife Hailey': Justin Bieber

Soon after young pop star Justin Bieber announced a break from music, the 25-year old lashed out at a mean troll on Instagram that said Justin married Hailey only to get back at ex-girlfriend Selena Gomez. He also slammed trollers for sending hate messages to Hailey Baldwin, who he married last year.

The troll read: "You are not in love with Hailey. You only married her to get back at SG plus Hailey sleeps with men like Shawn Mendes for fame and she's racist." 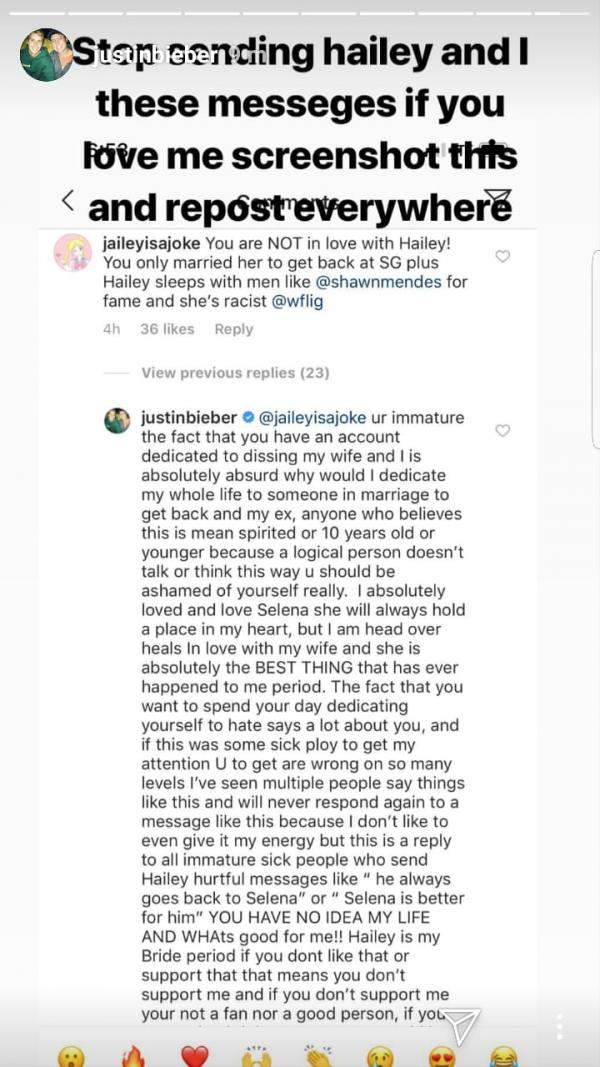 Replying to the mean comment, Justin said that while he finds the message immature and would not like to react, this is a final warning to sick people who continue to spew venom on social media.

He wrote: "You're immature. The fact that you have an account dedicated to dissing my wife and I is absolutely absurd why I dedicate my whole life to someone in marriage to get back and my ex anyone who believes this is mean spirited or 10 years old or younger because a logical person doesn't talk or think this way. You should be ashamed of yourself really. I absolutely loved and love Selena, she will always hold a place in my heart, but I am head over heels in love with my wife and she is absolutely the BEST thing to have happened to me. Period."

He then went on to add: "...This is a reply to all immature sick people who send Hailey hurtful messages like 'he always goes back to Selena' or 'Selena is better for him' YOU HAVE NO IDEA MY LIFE AND WHATS good for me!! Hailey is my Bride Period. If you don't like that or support that, that means you don't support me and if you don't support me, you are not a fan nor a good person!" he added.

Justin Bieber, in a heartfelt post on Monday, announced that he would be taking a break from music due to struggles with depression and promised fans that he would come back with a bang.