Actress Dimple Kapadia, who stars in Christopher Nolan's latest film Tenet that released on Friday in India, received a special note from the director on Thursday. In the note, Nolan says it was a delight working with Dimple. We guess the actress is thrilled, but there's another person who is more excited with this note... it is her son-in-law Akshay Kumar.

Akshay who is married to Twinkle Khanna, Dimple's daughter, tweeted excitedly: "Christopher Nolan pens a heartfelt note to Dimple Kapadia on the eve of their release. Had I been in her place, I wouldn't have been able to move in awe but having watched her working her magic in Tenet, I couldn't be more happy and proud of Ma." Akshay also attached a glimpse of the letter from Christopher Nolan to Dimple, which said: "What can I say? Working with you has been a delight. Watching you bring Priya to life all around the world has been fantastic. Thank you for your great skill and hard work and for lending your talent to Tenet." 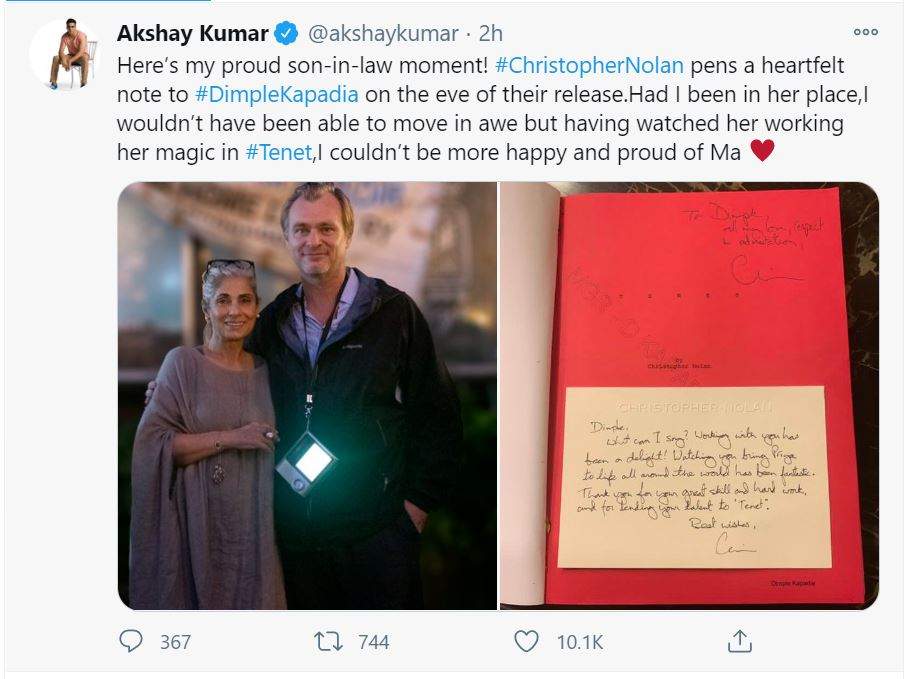 A few scenes of the film were shot in India as well, and Nolan before the release of the film posted a special video message for his fans in the country. "What I considered to be some of the most exciting scenes in the film, some of which were with the great Dimple Kapadia. We had an amazing time shooting in India and it means so much to me that you are all finally going to be able to see Tenet on the big screen. So, I hope you enjoy it. Thank you very much," he said in the message.