Sunny Leone's show Locked Up With Sunny is getting popular with every Insta Live. Hosted by Sunny from the confines of her home, this chat is a candid interaction with her celebrity guests. The latest celeb to join her on the show was cricketer Dwayne Bravo aka D.J.Bravo. 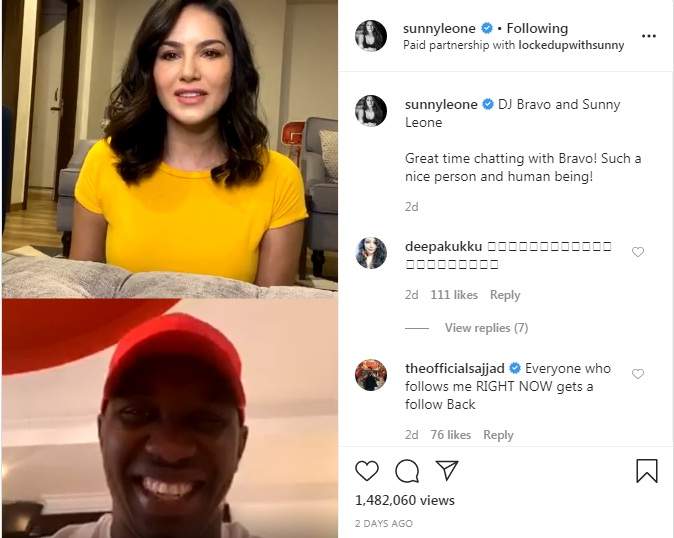 Sunny and Dwayne spoke about diet and working out in the middle of the lockdown. "I like meat, chicken and fish, I love rice and I eat a lot of rice. I eat whatever I like, but I train," revealed Dwayne.  The cricketer who is currently in Trinidad also said that he is missing his son who stays in Atlanta and that he is waiting to visit him as soon as the lockdown is over. Dwayne also spoke about his Corona song We Not Giving Up. He said, "I thought of it when I was leaving London and flying back to Trinidad. I got together with my musical team when I got home and I wanted to create an uplifting song for the whole world because the entire world is affected by it. I shot the video at my house." Both the stars also danced to She's A Maniac song from the movie Flashdance during the live conversation. Dwayne was trying to match his steps to that of Sunny and even said, "I have heard this song but never danced to it before."

Dwayne revealed that he is busy working on the track on MS Dhoni. "I am working on a song named Number 7. It is a special song which is for MS Dhoni. I am gonna (sic) write this song on his career, his achievement, and the love that we all cricketers have for him, so the title of the song is Number 7," disclosed the DJ.

Sunny who was in conversation with Dwayne for nearly 25 minutes said, "Dwayne is a fun human being and his positive attitude makes you smile during these sad times."