Not so sasti (cheap) anymore: Taapsee Pannu tweets sarcastically about the three days of raids

Actor Taapsee Pannu, whose house was among the multiple locations searched by the Income Tax department over “tax evasion” issues, has spoken up about what happened over the last three days of raids.

She said sarcastically that the IT department had searched for three things primarily: keys to a bungalow allegedly owned by the actor, a receipt worth ₹5 crore, and the memory of a similar raid that happened at the actor’s premises back in 2013, according to finance minister Nirmala Sitharaman.

She also added a postscript that read, “Not so sasti (cheap) anymore,” which was an apparent dig at Kangana Ranaut, who had often insulted Taapsee in the past along those lines. 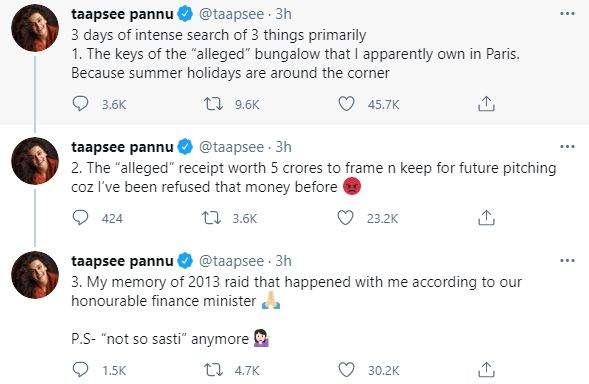 Taking to Twitter, the actor wrote, “Three days of intense search. Of three things primarily: 1. The keys of the ‘alleged’ bungalow that I apparently own in Paris. Because summer holidays are around the corner.

“2. The ‘alleged’ receipt worth 5 crores to frame n keep for future pitching coz I’ve been refused that money before.

“3. My memory of 2013 raid that happened with me according to our honourable finance minister P.S- ‘not so sasti’ anymore,” she joked.

When asked to talk about the raids that were currently underway, finance minister Nirmala Sitharaman had said the 2013 raids had not been an issue and that they have suddenly become one now.

“Answer it for the hypocrisy or answer it, saying from then this is happening till now, what’s the matter (with now)," she said. “In the national interest, do we want to know if there is some evasion happening,” media sources quoted her as saying.

However, the Union minister replied by asking him to stick to his professional duties. “Law of the land is supreme and we must abide by that. The subject matter is beyond yours and my domain. We must stick to our professional duties in the best interest of Indian Sports,” Rijiju had said on Twitter.

At least 30 locations in Mumbai and Pune were raided on Wednesday by the tax agency, including actor Taapsee, filmmaker Anurag Kashyap, and Vikas Bahl’s residences.

The IT department also carried out searches at the premises of the Phantom Films and former partner of Phantom Films, Madhu Mantena.

Phantom Films was established by Anurag, director Vikramaditya Motwane, producer Madhu Mantena, and the former head of UTV Spotboy, Vikas Bahl in 2011. The firm, however, was dissolved in 2018.

Other properties that were raided include residences of Shibhashish Sarkar (CEO of Reliance Entertainment), Afsar Zaidi (CEO of Exceed), and Vijay Subramaniam (CEO of Kwan). Kwan and Exceed Entertainment are well-known celebrity management agencies.

Anurag and Taapsee have always been outspoken critics of the government, especially with regard to civic, social and political issues. They recently raised concerns over the farmers’ protest, which has been underway at the borders of New Delhi since November 26 last year against the three farm laws.

Reacting to the news of the IT searches on these celebrities, Congress Lok Sabha MP Manickam Tagore said, “Why is (Union Finance Minister) Nirmala Sitharaman so predictable? It’s a sad story for the IT department, it has become so one-sided and political too.”

Meanwhile, Maharashtra minister Nawab Malik was quoted as saying, “The way in which raids were conducted in the homes and offices of Anurag Kashyap and Tapasee Pannu, this is definitely the usage of the Enforcement Directorate or the Income Tax department against those who take a stand against the government or its policies. Anurag Kashyap and Tapasee Pannu have raised their voice against the Modi government’s policies. This action is an attempt to suppress their voices.”