Kamaal Rashid Khan aka KRK, an actor and self-proclaimed critic, changed his stance on not reviewing actor Salman Khan’s films anymore and said on Monday that he will continue to critique his films even if the actor requested not to or “touched his feet.”

He wrote on Twitter, “Normally I don’t review the film if producer director or actor of the film asks me to not review it. But Now if this man (Salman Khan) will request me, or even touch my feet also, still I will review his each film and each song. Satyamev Jayate! Jai Hind (sic).”

This comes after he wrote a negative review of Salman Khan’s latest movie Radhe: Your Most Wanted Bhai, which had received poor responses from viewers and other film critics as well.

On May 26, Kamaal also said Salman Khan had filed a defamation suit against him. However, Salman’s lawyers later clarified that the defamation suit was not for KRK’s review of Radhe, but the corruption and money laundering allegations that he had made against Salman.

DSK Legal, who are the advocates for Salman and Salman Khan Ventures, said in a statement, “Mr. Kamaal R Khan, the defendant, has put out a series of tweets and videos alleging that Mr. Salman Khan has sued him for defamation because the defendant reviewed the film, Radhe. This is incorrect. The suit has been filed as the defendant has been publishing and endorsing defamatory allegations, including that Mr. Salman Khan is corrupt, that he and his brand Being Human are involved in fraud, manipulation and money laundering transactions, that he and Salman Khan Films are dacoits.”

However, following the statement, KRK posted a series of tweets on Friday claiming the lawyers were lying, and that the suit was indeed about the film review. He also attached an image of what looked like the documents related to the defamation suit.

Kamaal wrote, “This is the petition. Is this not about #Radhe review? #DSK lawyers are good liars! Aaa Thoo! (sic)” 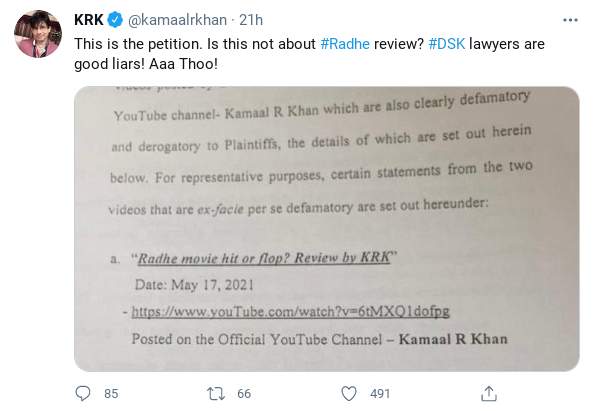 KRK further took a dig at Salman by mentioning that the actor’s father, Salim Khan too had said Radhe was a bad film. The critic wrote, “Salim Khan Sahab father of Salman has said in his interview that Radhe is a bad film. Means he is giving signal to Salman that he should accept that his film is bad, instead of filing defamation case against me. Thank you Salim Sahab for supporting truth (sic).”