Amitabh Bachchan, Emraan Hashmi-starrer Chehre gets postponed due to the spike in COVID cases

The release date for the Amitabh Bachchan-Emraan Hashmi starrer Chehre has been postponed due to the recent spike in COVID-19 cases. The film was initially scheduled for April 9.

Confirming the news, producer Anand Pandit said they wanted to ensure that the audience was safe. “Considering the situation and safety of our audiences and fans which is of utmost importance to us, we have decided to postpone our film Chehre. The team has taken immense efforts to make it a great cinematic experience and we are looking forward to our audiences coming to the theatres safely,” said Pandit.

Actor Emraan Hashmi also shared an official statement on Twitter, which read, “Due to the rising cases of COVID-19 and new guidelines for cinemas, we are unable to release our movie Chehre on 9th April and have decided to postpone until further notice. We have received an overwhelming response on our trailer and we are grateful for the love and support. 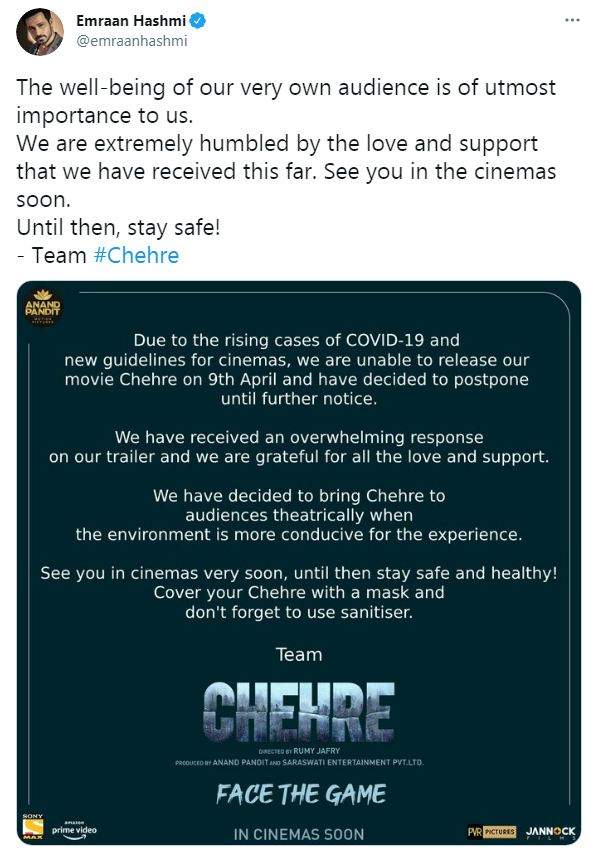 “We have decided to bring Chehre to audiences theatrically when the environment is more conducive for the experience. See you in cinemas very soon, until then stay safe and healthy! Cover your Chehre with a mask and don’t forget to use sanitiser. Team Chehre,” the statement noted. The makers are yet to announce a new release date.

Directed by Rumy Jafry, the film also stars Rhea Chakraborty. This will be her first movie release after the death of her boyfriend, actor Sushant Singh Rajput.