Exclusive: Rey Mysterio talks about his journey in the WWE, his memorable matches with Triple H and The Undertaker

Size does matter in the WWE ring. But when you look at the legendary WWE superstar, Rey Mysterio, who stands at just 5ft 6in, weighing about 79 kgs, all your assumptions are put to rest. His achievement of becoming the longest lasting player in the ring during the Royal Rumble 2006 match (at 62 minutes) and winning it, is still remembered as one of the biggest moments in the history of WWE. Earlier this week, Rey enthralled the Indian audience on Republic Day, by teaming up with Ricochet, and Indian WWE Superstars Dilsher Shanky and Giant Zanjeer, to fight against Dolphin Ziggler, King Corbin, Shinsuke Nakamura and Cesaro for the first ever WWE Superstar Spectacle.

It was a treat for Indian WWE fans to watch this highly entertaining match. The special thing was the combination of players who were part of Rey’s winning team who took on their rivals in the 4-Man Tag Team match. Looking back at it, the wrestler says, “Ricochet and I had the opportunity to step into the ring with two big men from India who have impressed me tremendously. It was a good confrontation. It was incredible to fight the match with this combination of two of the biggest guys and two of the smallest guys and our chemistry was incredible.” Over a Zoom interview from San Diego, Rey spoke exclusively to Indulge about his journey in the WWE, how he contributed to the evolving scene with his high-flying lucha libre wrestling style, his best moments and why he is training his son, Dominik Mysterio, to take the family legacy forward.

You have had an impressive career ever since you debuted in 2002. But it’s the 2006 Royal Rumble that’s always remembered when people take your name. What memories do you have from that event?
Stepping in the ring, being in the Royal Rumble 2006 and starting off with Triple H and finishing off with Triple H and Randy Orton, I feel I was very lucky and honoured to be in the ring with those two men who have such an illustrious history. To be able to share the spotlight with them, and to be victorious in that match was incredible. I was learning their strategies, trying to figure them out and at the same time, I was overwhelmed. It was quite exhausting to be in the ring with 29 opponents for over an hour. But at the end of the match, it was the best feeling in the world because I knew something bigger was coming. I knew there was an opportunity for the world title and I was doing it for one of my best friends, (the late) Eddie Guerrero. If I could go back, I would do it all over again. 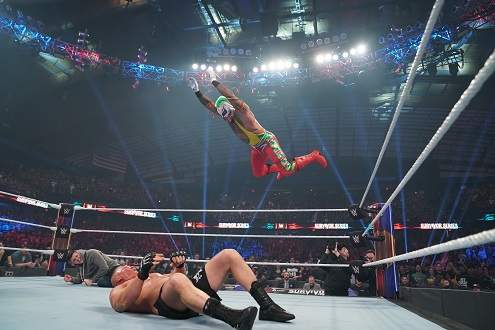 The Republic Day Superstar Spectacle was quite a feat! While you said you were impressed with your Indian teammates, who is your all-time favourite Indian WWE Superstar?
The first Indian guy I faced who was incredible in size was The Great Khali and one of the scariest I have ever been in the ring with. It was very intimidating. He was big, not just tall in height, but big in all features. His arms, his body, his torso, his hands, his face — everything made him look like a true giant. It’s just incredible how this character evolved and became larger than life. His country loved him for what he did. I got to see that when he was back in India and how they just loved The Great Khali because of who he was. It didn’t matter whether his character was a good guy or bad guy, they loved him. 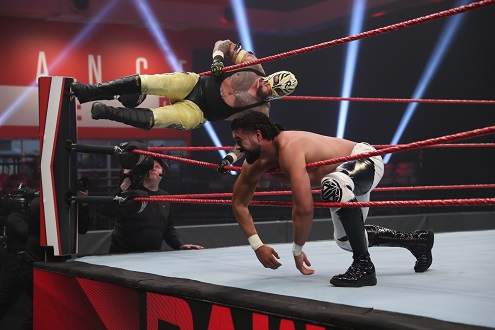 Tell us about how you have evolved with WWE and your signature move, the 619+West Coast Pop.
WWE has changed a lot today. The scale of the talent, the area of manoeuvres, the style of wrestling have evolved, and I feel I was one among the fighters to blame for this evolution. I am one of the pioneers who contributed to this evolution (with the lucha libre wrestling style). My signature move which I have been doing since I was a kid, comes from the fighters who have influenced me. I used to watch wrestlers like Tiger Mask, from Japan do that move. It was like a swing around the ropes. Another one of my favourite wrestlers as a child was Super Astro from Mexico City and he too did this move. To be able to take their step and turn it into something special, honouring those wrestlers, has been awesome. I just took that move and created my version which was connecting with my feet and hitting my opponent. However, I changed the name of the move from Frankensteiner to the West Coast Pop. It refers to where I grew up in San Diego in California on the West Coast. Hence, I decided to name it after that. The number 619 is the area code of San Diego and I have included it in the name as these two kind of went well with each other, that’s why it’s called the 619+West Coast Pop.

We’ve seen you be lethal and unforgiving in the ring, but tell us about the real person behind the mask.
I am probably the most calm and relaxed guy outside the ring with the mask or without. At home my family says, we can never get you mad, I think people like me are the worst because they can hide their emotions, go out in the ring and destroy their opponents. That’s been my strategy always. I have always been calm and composed but when the bell rings, it’s time to go all out!

After his Final Farewell, The Undertaker remembers his best matches and reveals his future plans​

You have faced The Undertaker in four singles matches, and the SmackDown of 2010 is memorable because of the Deadman’s injury when you broke his nose. How was it to feud with the greatest legend of WWE?
I remember the first time I was pitted against him, I enjoyed watching The Undertaker’s entry. As he walked into the ring, I was like ‘wow!’ I had watched him fight as a little kid. But when the lights turned on and the bell rang, I donned on the role of Rey Mysterio and I had to fight this man. I truly cherish all my match experiences with him and feel honoured that I was able to step into the ring with him.

You have been seriously training your son Dominik Mysterio. What’s the way forward for both of you?
Dominik grew up around this sport and he has watched me do it for so long. My daughter too knew that wrestling was always going to be there. But when Dominik finally decided to start training, he was a bit old. He was 19, whereas I started training at the age of eight. I think at the end of the day, he realised that this was his destiny, to be part of what his dad has been a part of. He said, “Dad can you train me? I want to see if I can make it in this business.” When he stepped in the ring for the first time and I saw what he was doing and how fast he was learning, I saw something special in him. Right now, I am quite focused on him and I am trying to teach my son fundamentals, like how to react and how to do certain things in the ring. Even as I teach him now, it’s a learning process for me as a father and as a mentor.

You have also said that if your paths cross, you wouldn’t mind betraying your son in the ring...
Well... I have taught him about that and eventually there maybe a time when we have to face each other. If that’s the case, then he has to do everything he can to try and pin me down. He has to do whatever he can to win. Not only with me but with everyone. At the end of the day, he has to take care of and look after himself. If we happen to cross paths and I have to throw him out, I will throw him out, I am not going to let him shine because that will mean giving him the victory. He has to earn it, he has to work for it.

Watch Royal Rumble 2021 on February 1 from 5. 30 am on Sony Ten 1 and Sony Ten 3
ayeshatabassum@newindianexpress.com
@aishatax