TV audiences were introduced to the shell-shocked war veteran, Nick Brody, who comes home to a world that’s completely different from the one he left behind, in the drama, Homeland (2012). It was a performance so convincing, it earned its player, the British actor Damien Lewis an Emmy for Outstanding Actor in a Drama Series, as well as a Golden Globe for Best Actor in 2013. But before he became Brody of Homeland, back in 2008, the actor played Charlie Crews in the show Life, which went on to win the AFI award for Best TV Series. After Homeland, the 47-year-old actor did star in some movies but failed to make much of an impact — until in 2016, when he appeared on the drama, Billions, currently in Season 3.

The series, created by Brian Koppelman, David Levien and Andrew Ross Sorkin, is loosely based on the activities of Preet Bharara, the former US Attorney for the Southern District of New York (played by Paul Giamatti) and his legal battles with hedge fund manager Steve Cohen of SAC Capital Advisors (played by Lewis). Ahead of the TV premiere of Season Three, we spoke with Damien Lewis on what’s in store for the audience with his character Bobby, and why both Homeland and Billions are Barack Obama’s favourite TV shows.

What is your take on the exciting Season Two finale?
I loved it because it’s sort of a superhero movie. It’s a bit like The Avengers on Wall Street. Everyone is powerful, either politically or financially, and smart and witty. It’s a very alpha world. And they sort of slug at each other with their brains and outmanoeuvre one another. Someone gets hit and they go down, but they bounce back up again as a superhero does. Whenever there’s an opportunity to see someone really down, it’s good.

What was your reaction to your character Bobby being jailed at the end of the season?
I loved seeing Bobby go down because I’m going to enjoy seeing how he tries to get himself back up again. I think it will be a longer process through Season Three. There’s a prosecution pending for Bobby now, but it’s complicated. That was the first time we’ve seen him do an explicitly criminal act to get what he wants. I think in Season Three, we’ll find Bobby in the mire a little bit; compromised and trying to find ways to get out of it.

Also read: Claire Danes on her role in Homeland

Will Bobby continue to struggle to gain respect from the financial community?
There’s something arriviste about Bobby. He’s a blue-collar, working-class guy who made a ton of money. So he’s the avatar of the American Dream. But, operating in New York, there is a hierarchical snobbery that is a bit like something we might expect more from the UK. There’s a class system and Bobby’s money doesn’t buy his way into it. So there’s always a sense that he’s the jumped up kid trying to buy his way into the establishment. And that gives him a sort of a gangster quality, which is why I think people respond to him and they like him, in spite of the awful things that he keeps doing.

How does Season Three compare with the previous two?
Season One and Two are quite different. Season One is sort of an introduction to the world, and all the characters and Season Two is a really good thriller. That continues in Season Three. It’s a cat-and-mouse game. 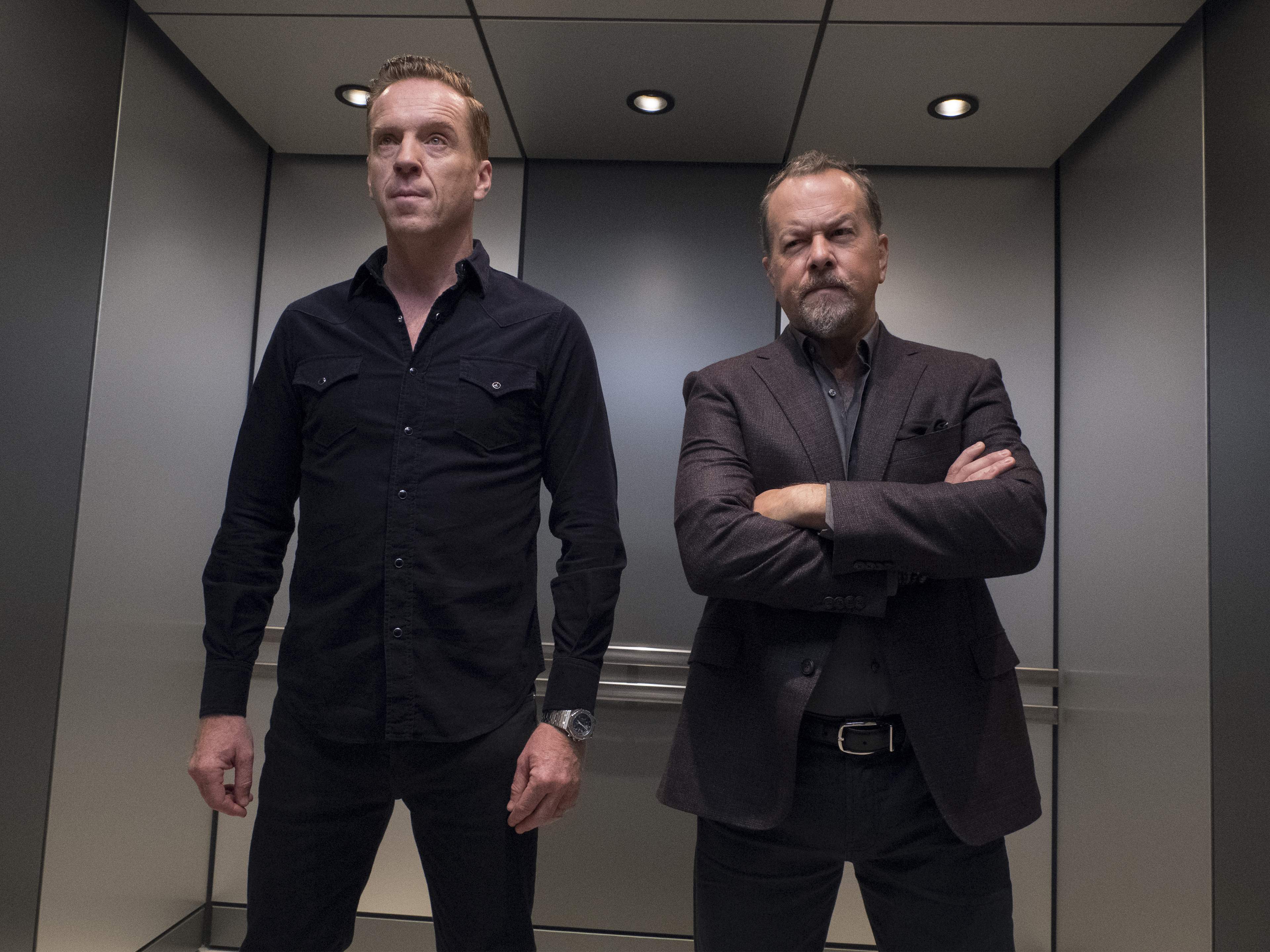 And, what’s in store for Bobby?
How is Bobby going to get back into his company? How is he going to get his assets unfrozen and be trading again? Bobby being Bobby — he’s going to probably find many different ways to manipulate and make sure that he can trade at an arm’s length without being personally responsible. But at the same time, his marriage isn’t going very well. He has a lot to deal with.

Bobby brings Wendy, who plays a psychiatrist, to work with him in at Axe Capital in Season Two. How would you describe their relationship in Season Three?
Wendy and Bobby are entirely platonic, I think. Their relationship is built on mutual admiration, respect, trust — all of those things. As Wendy said earlier on in one of the episodes, “I feel like I helped to build Axe Capital. I feel like I’m a stakeholder here.” He can’t do it without her — which, of course, is what created so much tension in his marriage to Lara (his wife). The problem is, when he needs to talk about something, he tends to go to another woman, not to his wife, as much as he adores her. Given that Bobby can’t actually set foot in Axe Capital because he’s arrested, Wendy comes to visit him in his new setup. Bobby has a new penthouse in New York, and he’s spending a bit of time there.

In Season Two, Bobby is very dismissive of Lar’s attempts to set up a new business. How does that play out in Season 3?
He’s really ungenerous at that moment. He’s very stressed. He’s tired. He’s got Chuck (who plays the US Attorney for the Southern District of New York) on his case. There are instances where he snaps at her. At that moment, as we’ve all done, he speaks some home truths and tells her, ‘You know, you’ve not done the research. You have not done the due diligence on this, in order to make this a viable thing, and stop mucking around.’ I don’t think there’s any competition between him and Lara. I think he would love her to be good at what she does. But now, he’s just frustrated that it wasn’t thought through properly.

Taylor Mason, who identifies herself as non-binary and uses singular pronouns, becomes Bobby’s go-to new recruit in Season Two. Why does Bobby place so much faith in a new employee?
You know, when Bobby first meets Taylor, he was unsure how he was going to respond. Whether it’s something old-fashioned — something sort of ball breaking, a little bit of the old-school gangster in him — Bobby is irritated by something you might see as faddish and not real in some way. But he does completely the opposite and falls in love with their minds and their ability to compute —  to see in the same way that he can. And so, there’s a total meeting of minds. He recognises their value instantly, which is why they rise so quickly, and why they are instrumental to the company’s success. I was just teasing the guys the other day, as one of their favourite movies is Blade Runner. In some ways, they are replicated. They are the less-emotional, more highly functioning algorithmic version of Bobby. And he loves them for that.

Will we see more character development in Season Three?
Season Three is a good opportunity to start growing some of the other stories. You can’t have Bobby and Chuck just locking horns for five or six seasons — it would become dull and repetitive. From Bobb’s point of view, Chuck was down in Season Two, and he had to recuse himself from the case. We think Bobby can see everything, but he totally missed this because of his need to win the game. And, of course, a theme running through the whole show is: If you lose your cool, if you lose your ability to be rational and calculating and you let your emotions get the better of you, the other guy will win. So, in this season, we have Bobby down, out and working on the periphery, unable to be central, as he’s been charged. In terms of Bobby, it’s about how he will rise again, or will he? We don’t know.

You don’t have many scenes with Paul Giamatti, who plays Chuck Rhoades.  What is it like, when both of you get together to perform a scene?
It works on many different levels. There’s Bobby and Chuck coming together — it’s a climax of sorts because they’ve been brought together, having spent the previous five episodes, or however long, apart. So, you know, there’s a climactic event there. There’s a climatic element for me personally, as I love getting in the ring with Paul. He’s a wonderful actor and we don’t get to do it very often. And so, there is an excitement about it. You have to be careful not to overdo it, not to get a bit overexcited. It’s fun and great, so let’s really deliver this moment — just calm down, know what the point of the story is, and just play the story. It is imbued with its own importance, because of where it comes in the story.

Is it true that former US President Barack Obama is a huge fan of the show?
He seems to be! I saw him at the White House Correspondents’ Dinner. I was able to say hi to him. He was a huge Homeland fan, so we have a nice little repartee when we see each other. I said, ‘Mr President, I hear you are watching Billions and you’re enjoying this show,’ and he said, ‘Yes, I am, very much. There’s only one problem. Hedge fund managers aren’t that cool.’

Finally, how is Season Three shaping up, and what can the fans of the show expect?
I think it can be the best season yet. The guys played a very clever game. They didn’t rush into the plot early on. And the plot is slowly and compellingly building. So you’ve got a lovely thriller, examining a world of great power and being able to explore what’s going on in the real world at the moment.

Watch The Billions Season Three, every Tuesday at 10 pm on AXN.