Netflix series Sacred Games is currently the hottest show on the internet. Directed by Anurag Kashyap and Vikramaditya Motwane, Sacred Games is based on Vikram Chandra's eponymous book and tells the tale of Sartaj Singh, a seasoned and cynical Mumbai police officer.

While there have been a lot of Sacred Games controversies making headlines, the latest news about the series is that American screenwriter Paul Schrader, known for working on Martin Scorcese's Taxi Driver and Raging Bull, is watching it. And apparently, its English dubbed version reminded him of how tricky the use of English language vulgarity is. 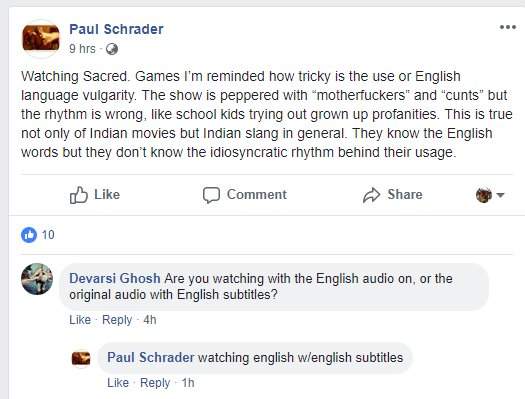 On Monday, Schrader took to Facebook and it said: "Watching Sacred Games. I'm reminded how tricky is the use of English language vulgarity. The show is peppered with 'motherf***ers' and 'c**ts', but the rhythm is wrong, like school kids trying out grown up profanities. This is true not only of Indian movies but Indian slang in general. They know the English words but they don't know the idiosyncratic rhythm behind their usage. It shows the nexus between organised crime, corruption, politics and espionage in post-liberalisation India." 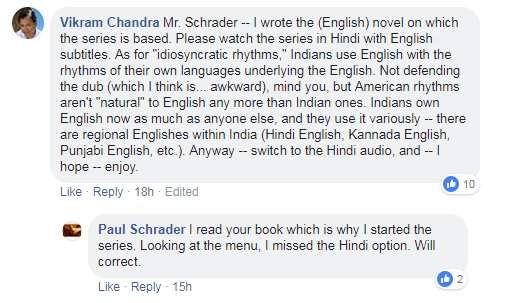 Urging Schrader to watch the series in Hindi, writer Vikram Chandra replied, "Mr. Schrader, I wrote the (English) novel on which the series is based. Please watch the series in Hindi with English subtitles," he wrote on the comments section of the celebrated screenwriter-directors post. Indians use English with the rhythms of their own languages underlying the English. Not defending the dub (which I think is awkward), mind you, but American rhythms aren't 'natural' to English any more than Indian ones. Indians own English now as much as anyone else, and they use it variously -- there are regional Englishes within India (Hindi English, Kannada English, Punjabi English). Anyway, switch to the Hindi audio, and I hope you enjoy."

Schrader then told Chandra: "I read your book which is why I started the series. Looking at the menu, I missed the Hindi option. Will correct."

And Chandra, in turn, responded with: "Great. It's immensely important to me (and the entire Phantom Films crew) that you - of all people - watch the series in the best manner possible. I've been a huge fan of your work since I snuck out of class in the late seventies to watch Taxi Driver, and had a life-changing experience in a Bombay theatre."

Having gone through the conversation and sharing a screen grab of it, director Vikramaditya Motwane tweeted with the line "The suspense is killing me..." and Anurag Kashyap later retweeted it.

Guess the whole crew of the series is pretty excited about the legendary scriptwriting watching their work.

Have you watched Sacred Games yet? What do you think of the show?