Exclusive: Does the sari have a successor? We asked some of the most interesting names in haute couture

The sari is unconditionally femme-loving, but this year, it’s also the easiest thing to sell over a Zoom appointment. And every atelier featured in this exploratory piece agrees - nothing can catch up to it, because in 2020, it’s gone truly, functionally global. Why else would Priyanka Chopra be wearing one to the Parisian Jonas-Turner wedding?

But as the world tackles its biggest reshuffle, now is a great time to ask brazenly oddball questions like does the sari have a successor? This year’s festive circuit has produced some credible alternatives, like Arpita Mehta and Heena Kochhar’s roomy ghararas, that can be styled with old school choga kurtas or skimpy, metallic crop tops. The Peshwaz is the unlikely Mughal styling that’s going steady in the wedding spectrum, thanks to Manish Malhotra’s wedding festive collection.

But as Ridhi Mehra, Seema Gujral, Samant Chauhan and others tell us, nothing has toppled the sari as the centre of celebratory styling - yet. Especially because it's adaptable enough to steer its own resurgence, be it as the slinky hip-hugging lehenga sari or the futuristic draped jumpsuit sari. Our exhaustive research suggests that the sari is unimpeachable for desi couturiers.

Is this why Indian fashion hasn't worked towards producing an heir to its biggest asset? We passed this cheeky question around to some of the most interesting names in haute couture to see how they’d react. And we weren’t disappointed:

Young Bollywood’s go-to couturier Ridhi Mehra has been a prime mover of the retro, draped ruffle sari. At her winter festive showcase at Lakme Fashion Week’s first-ever digital run, this cosmopolitan styling gets most of the attention. “My millennial buyers want something classic and repeatable. They are looking for newer options and will try a lot of things, but a sari checks a lot of their boxes,” she remarks.

Reflections, her newest collection, plays up the concept of tonal drama and makes a lot of room for the radical belted sari that’s young and fuss-free. Mehra confirms that the sari is not going anywhere, because it’s getting more imaginative and thus leading its own resurgence. So maybe it doesn’t need a successor? “The reason why the sari is so significant to our fashion is because it’s perfect for the Indian body, the drapes, the silhouette, everything. The classic sari will never not be relevant. But over the years we have experimented with more convenient formats that make it easier for modern buyers,” the designer reflects.

Mehra’s festive pick for this season: The designer’s belted draped jumpsuit sari took B-town by storm and was flaunted by everyone from Kriti Sanon, Shilpa Shetty to Mira Rajput. “Our jumpsuit sari is a great example of how the traditional sari has evolved to stay timely. It’s really functional and adaptable,” Mehra chimes.

Mehta is the haute godmother for all impromptu brides, and despite being a sari loyalist, she’s currently suggesting the lehenga to all of them. “This year we have a lot of last-minute brides who are undecided about the dates of their D-day, so a lehenga is the safest pick whenever the wedding happens,” she tells us. Her most Instagram-worthy bridal creation this year? Definitely Miheeka Bajaj’s raspberry pink lehenga and jacket ensemble from her mehendi ceremony, which probably sits on your virtual moodboard.

“It was a conscious styling choice, to go for something different, and not a sari - a custom-made look. And we went with an unusual pink kalidar number and jacket and there was no gold or metallics that you usually find in a wedding number. Plus, the colour made it stand out. That’s actually a great tip for brides, opting for interesting colours to make a statement,” the designer shares.

Mehta suggests that 2020 is the year for tonal shock, and this year the couturier has worked with some plucky, eye-catching shades like berry, teal, mango and a camel palette. Her linear embroidered yokes, kite pants and hip-hug lehenga could easily replace some saris in our closets. Though she insists that no garment could be as accommodating as the sari, her A-lister clientele featuring Jahnvi Kapoor and Kiara Advani, is biased towards Mehta’s skimpy chic ghararas and lehengas.

“A lehenga can be so flattering, it can hide anything, it’s a saviour for last-minute styling. But of course, when it comes to a sari, a 16-year-old can wear it, and a 75-year-old can wear it it’s hard to replicate that kind of versatility. There will probably never be a successor to it, but we now have so many great alternatives,” she chimes in.

But what do her millennial buyers want this year? “Something they can wear over and over again because every look is now photographed, it’s all about the versatility of one item,” she clarifies.

Mehta’s advice for urbane brides: “Brides are now going for a full skirt and a crop top, it’s so chic. I always tell brides to focus on the mood of the event to choose what to wear, be it a sari or anything else,” Mehta ventures.

Samant Chauhan has identified exactly why the millennials won’t let go of the sari, especially this year. “We have two kind of clients, one who wants to go all out and wear an old school Banarasi recalling their grandmum’s fashion language and, then there are some who want to go minimal, maybe with a six inch gold patti at the bottom and that’s it. The sari is a great resource for both these aesthetics,” he estimates. 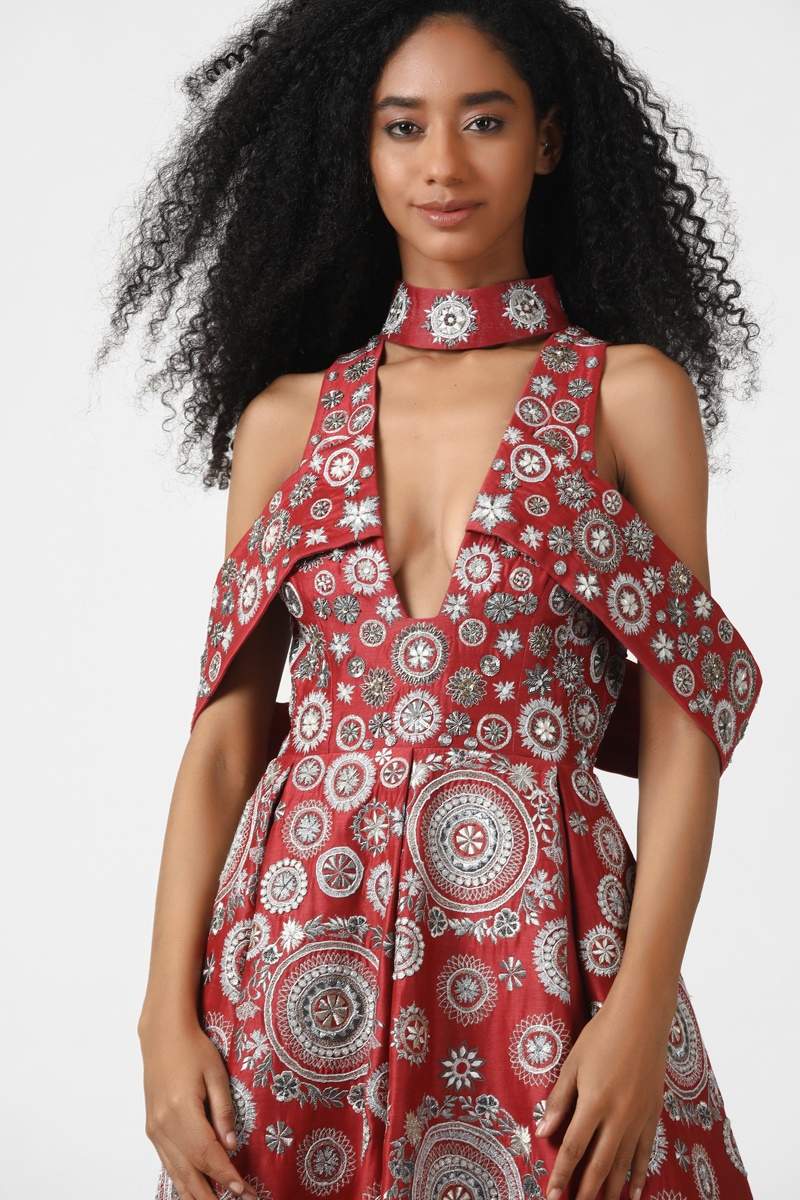 The designer who has famously stuck to a black and white palette for his couture creations till date, launched his first coloured line-up this year, which was conceived to get you noticed at Zoom parties. “This year, people want vibrant colours which look good on screen. If not a sari, maybe in an anarkali or something that is trendy but almost as elaborate because people do want to splurge this season, they’ve been holding up so many things for so long,” Chauhan opines.

Chauhan’s hack to stand out at a zoom soiree: “Your colours and lighting matter a lot, so pick flattering ones. But most importantly, pick something that is consistent with your personality,” the designer suggests.

“I think the new sari is the handloom sari, old weaves in a contemporary format - ideally modern accents with an age-old craft, like a polka dotted bandhani sari, that could usher in a whole other design language,” remarks Rhea Pilla Rastogi whose fusionist saris are unparalleled in spunk and drama. 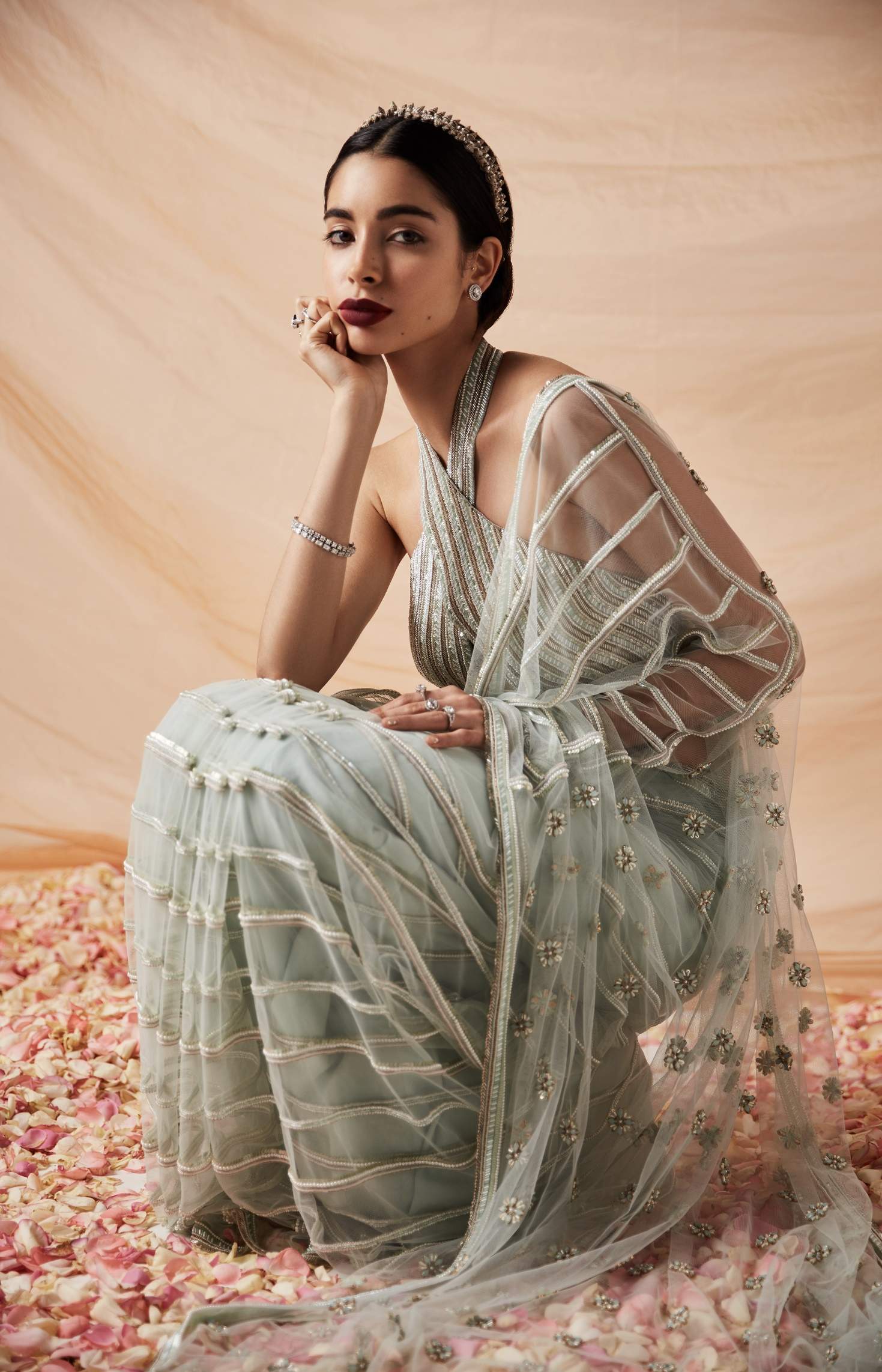 Rastogi surprised us when she admitted that she wants to explore the classical side of the sari next. “It’s funny because with every fashion cycle we always tend to come back to basics, even more so when it comes to saris. All my young buyers are out here looking for traditional silhouettes so a sari is the ‘it’ trend for them,” the designer comments.

Her go-to fashion advice: “Never follow trends, they come and go, but your personal style doesn’t. It’s always better than latching on to an unsuitable trend to make it work,” Rastogi tells us.

Romaa Agarwal’s Parsi celebration wear line and rich raw silk anarkalis dominated our Instagram timelines this year. And the designer feels the sari’s successor would need to be a utilitarian superstar. “I personally feel that the sari will never face oblivion's curse and its relevance is continual, what with all the innovations. But its worthy successor would have to be something more handy and yet something that lives up to the feeling that a sari gives us. For instance, it gives me a sense of ethnicity,” Roma tells us. The designer has always prioritised homegrown karigari and with her new collection, Agarwal introduces a nuanced, sophisticated form of celebratory dressing, that is in sync with this year’s broader design culture. Though saris do find a place in the line, her most interesting innovation this year is no doubt the Mukaish embroidered pyjama pants which add a lot of discernment to desi separates.

Where does the sari stand in 2020?: Agarwal pitches the sari as a sartorial equaliser for an unpredictable year. “This festive season is going to be very different and the sari can be a trusty, evergreen option,” she remarks.

The youngest atelier in this roster surprised us with her unabashed favouritism towards the classically draped sari, but then her Instagram page also suggests the same. Khera’s monotone silk satin sari styled with 3D blouses are leading this year’s hottest fashion revelation and are the ultimate form of self-expression.

“I love how the sari has now gone truly global, and how the younger crop doesn’t even want to modernise it, they want the whole experience, with the long palla and everything. I don’t like changing the silhouette of the sari at all, I love seeing my clients agree with me,” Khera propounds. So does the sari need a successor? “No, it’s the queen,” she exclaims

Styling a sari in 2020: “Keep things simple, especially when everyone is going over the top. The fabric is the hero of a sari, because it doesn’t have a lot going on. A rich, luxurious fabric will make you stand out for its simplicity,” she says decidedly.

Jaju’s personal trajectory is inseparable from the sari. “My in-laws are one of the first handloom weavers from the village Chanderi, M.P. Being in that atmosphere and retailing our own craft was the driving force for my journey,” she recalls. The designer obviously doesn’t think the sari needs a replacement anytime soon, considering how it’s still the backbone of the textile industry.

However her newest breezy monga silk kalamkari sets are the epitome of desi loungewear. And Jaju advocates dressing up as this year’s biggest stress-buster, sari or no sari. “ Since intimate and small celebrations are the new normal, you should not be holding yourself back to look the part when dressing up can make you feel good,” the designer suggests.

Our favourite sari replacement from her line-up: The billowy, puddle-grazing cutdana embroidered beige kurta with a gather detail

Seema Gujral’s sheesha zari work lehengas featuring three-dimensional embroideries, inspired by Maharanis of yore are leading the resurgence of the ‘hot bride’ trend; the plunging necklines and the metallic mesh scream, ‘drama.’ “A sari’s charm is unparalleled. Having said that, I feel lehengas could be a worthy heir to the sari. It’s versatile, it has a glamorous silhouette. It’s easy to contemporise, double dupattas and beautiful embroidered belts can add a modern touch to it,” she tells us. But Gujral feels that this is not the year for picking sartorial sides but to support heritage karigari and one-of-a-kind design language in whatever way one can.

“The pandemic has completely shifted the focus towards conscious consumption and there has also been an increased emphasis on acknowledging the value of our traditional crafts and our roots. When working on my Portraits collection, these factors became key focal points. The amalgamation of traditional handiwork and contemporary haute couture generate a style that is perfect for the sensibilities of the urbane bride,” Gujral says.

Her best sari substitute: “For intimate dos or casual daytime events, a gharara works the best and makes you look put together and effortlessly elegant,” she offers.