Chaitanya Rao is a man who is always on the move. Whether it is collaborating with city-based jewellery brand Masami to launch his Festive ’19 edit, styling former Bigg Boss contestant Raiza Wilson as the showstopper for his S/S ’20 collection or crafting actress Nayanthara’s wardrobe for her forthcoming movie Netrikann — the fashion and film designer often finds himself multi-tasking.
The pandemic notwithstanding, 2020 has offered him quite a packed schedule too. In the weeks prior to the lockdown, the designer and stylist was at Baku — on the sets of director Ahmed’s action thriller starring Jayam Ravi and Tapsee Pannu. Mid pandemic, in months of June to August, the 44-year-old was juggling multiple projects. Apart from putting together his bridalwear line, the city-based designer was gearing up for his first virtual fashion show and working on costumes for director Rajiv Menon’s then untitled project with Amazon Prime.

Now, days after the filmmaker unveiled the trailer of Amazon Prime’s first anthology of five Tamil short films, Putham Pudhu Kaalai, Chaitanya Rao takes us behind the scenes. He gives us an exclusive sneak peek at his costume design for Andrea Jeremiah, the lead actress in Rajiv Menon’s short; tells us what it took to put together a character wardrobe during a pandemic, and his upcoming projects. Excerpts:

One of your first projects was with Rajiv Menon on his critically acclaimed movie, Minsara Kanavu in 1996. What was it like coming back to a set with him at the helm?

My first film was Minsara Kanavu, where I was assisting Priya Balasubramaniam. I was about 18 or 19, so Rajiv has seen me when I was a kid...well, he was also pretty young at that time (laughs). After that, we worked together on some advertisements shoots. So we have known each other for a good few years. But later there was a gap in between. It was great to reconnect with him!
For Putham Pudhu Kaalai, I have worked on two major aspects. One was the styling for Andrea and the other one was GV Prakash’s look for the theme song of the anthology.

Tell us about the wardrobe you created for Andrea’s character.

Andrea plays a musician. We wanted to create a rocker chick persona, but since the movie plays out during the lockdown, it had to be restrained. We referenced some famous musicians like Amy Winehouse and her iconic cat-eye make-up, and Billie Eilish and her signature oversized styling for something more contemporary. In keeping with Andrea’s character arc, we have kept the layering very light and used mixed and wardrobe staples like a hoodie, oversized shirt and a sari styled with a cami top.

How different is the creative process working on a collection and styling a film?

There is a lot of pressure when it comes to styling a film. A lot of decisions are made last minute. The turn around time for a movie is much faster, and at times you need to get clothes stitched in less than a day. The other major difference is, with fashion, you can experiment with silhouettes. But, with a film the issues are practical, your actors have to be able to dance and move. It isn’t just a two-minute process.

You recently launched your bridalwear edit.

Yes, my collection includes a range of Kanjeevaram lehengas, sheer organza jackets and georgette shararas with floral prints and gota work. I have also used a lot more organic cotton fabric that is elevated with my signature antique gold embroidery. For men, there are long kurtas, jackets and bundis with french knot embroidery and brocade work.

Earlier this week, on Monday, I resumed work on Nayanthara’s costumes for Netrikann. I anticipate that the action-thriller starring Jayam Ravi and Tapsee Pannu will also begin filming shortly. It will be the first time I am working on the costumes for the entire cast, so that’s a project that I am looking forward to! 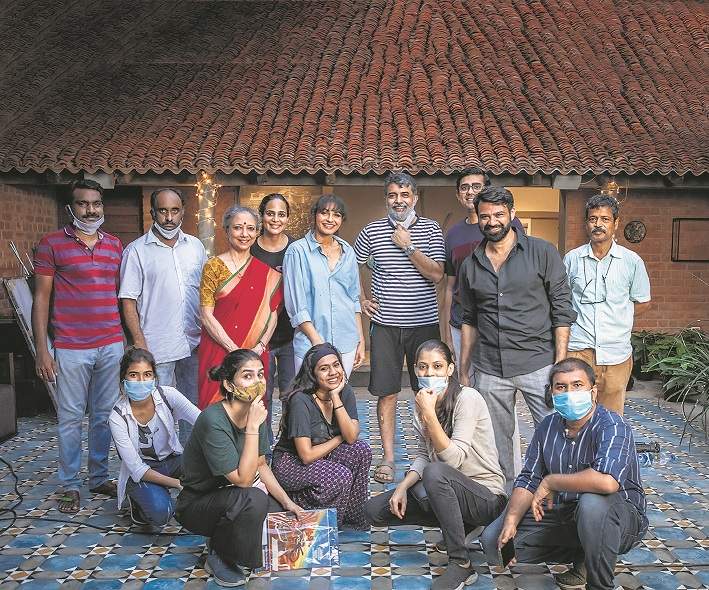 Before you go, what was your favourite memory from Rajiv’s set this time around?
It was great being treated as an equal, especially since I was an assistant when I was first on set in 1996.
Also, what many people do not know is that Rajiv is a brilliant singer. Sikkil (Gurucharan), who is also a lead in the short film, is a trained musician and you have Andrea, who is a performer. Those couple of days on the set was like a jugalbandi.