THE strides Oudh 1590 has taken to give Kolkattans a taste of a bonafide period dining experience is a common ice-breaker in Bengali gourmand circles. By now, we’ve all had a taste of the ambrosially steaming Nawabi cauldron dishes — tangri kebabs, Nehari Khaas, and Bhuna Biryani —which originated in the shahi bawarchi khanas in 16th century Imperial Awadh. And all of the above at Oudh 1590’s sixth edition of The Great Awadhi Biryani Festival, which kicked off on May 23, and will go on through this month. Like every year, it is serving up the most delectable, one-of-a-kind dishes, created by a bawarchish which still follows the recipes from the kitchen of the Gourmet King, Wajid Ali Shah. “Each biryani that we serve during the festival represents the marriage of royal aromatic charm and the secret spices of the Rakhabdars,” says Shiladitya Chaudhury, who co-owns the fine dining joint with Debadity a Chaudhury.

As we walked through the plush and moody, Mughal art-flanked interiors, the rich voice of Begum Akhtar warmed our senses with a stunning thumri. Walking into Oudh 1590 is like escaping into a medieval painting, away from the bustling urban demands of the city. We picked one of the many flat-wooden top tables replete with Persian detailing and a very thoughtful hand sanitiser, as chef David Mondal revealed how he helped the owners curate the menu for the much-awaited festival. “You’ll find authentic Awadhi numbers, which are also easy on our taste buds; we were very aware that this is a summer menu, and picked recipes which are easy to digest and don’t make you feel bloated. Some of our biggest successes have definitely been our scrumptious vegetarian biryanis, like the Multani Kathal Biryani, which is a total surprise in terms of flavour,” David tells us. 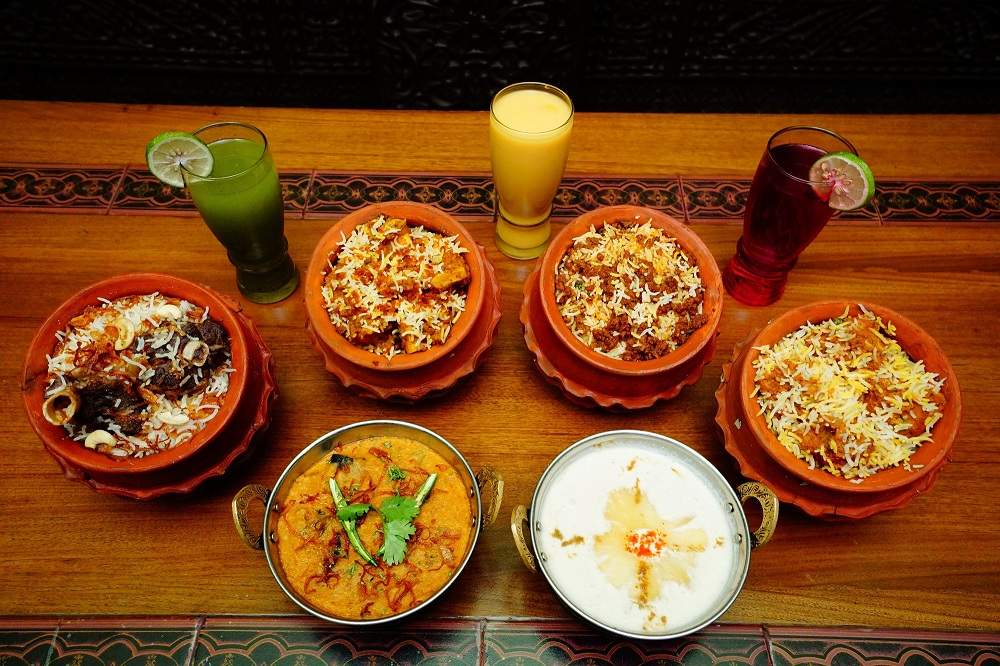 As we chatted away and Begum’s Mohabbat ke Anjam enveloped the ambience, our much-awaited festival specials began to arrive. We decided to go with the chef ’s recommendation first, the Kathal Biryani, made with the distinctly prepared jackfruit, and we have to admit, we regret scoffing at veggie biryanis all our lives. The piquant and familiar taste of the tender kanthal, is something we had never experienced before.

The curried kanthal also makes the biryani a wholesome entrée, as it goes exceptionally well with the spice-roasted rice. Our next pick was the Mahi Kofta Biryani, which is essentially a dum biryani. The gravied fish kofta is indulgent, and cooked separately from the rice to let the spices permeate. We were also quite stunned with how the mahi koftas were paired with this particular rice entrée. The Gosht Yakhni Pulao is a total summer win-win. An Awadhi classic, cooked in meat broth, it serves up a light and welcoming taste. The next item was perhaps the showstealer of our afternoon — the Gosht Bhuna Khichdi, which is not technically a biryani, but has been introduced into the menu to relieve your over-worked taste buds. The khichdi was rather simply prepared, with rice, dal and soft chunks of mutton, garnished with some bhuna onion flakes. It’s delicious, it’s almost homely, and contains the perfect moderation of spices. We decided to finish with the Keema Biryani, a lavish dum biryani cooked with a melange of the most intense homegrown spices, and minced meat. Some of the other authentic preparations on the menu to watch out for, are the Shikari Hansa Handi Biryani which is a dum biryani prepared with a game bird, and the Gomti Mahi Sugandhi Biryani, which is made with a marinated ghondhoraj beckti.