Chennai-born Shri Bala has been cooking food ever since she was nine and seeing her interest, her mother suggested her to pursue her bachelors in culinary instead of becoming a Chartered Accountant. But, when she decided to pursue a culinary course, she realised there is no course that caters only to vegetarians. Uncomfortable with the idea of her preparing non-vegetarian food, her mother expressed her displeasure and Bala went ahead with her graduation in accounts alongside giving exams for Chartered Accountancy and Company Secretariat. She cleared both and took up a job. Over the years, her job took her across the country to audit companies and every time she would return home, there would also be lesser-known recipe accompanying her. Years later, in 2010, she also pursued a degree in law so that she can also expand her expertise and can also look into the law-related aspect of the work. The job was paying well and everything was going smooth until three years ago when she lost both her parents within a year and found herself at a crossroad. In her bit to show her frustration and anger, she quit her job. Clueless about what to do next, she found solace in cooking.

“I would take pictures of it and put it on social media. Slowly, everybody would take notice of it,” says Bala who soon turned into a home-chef and was being followed by some renowned chefs. “That’s how my interaction with chefs began and then I pointed out their biasness towards Punjabi food and not promoting the South Indian food in the right way,” adds 45-year-old Bala whose argument and enthusiasm to offer an alternative comprehensive menu opened opportunities for her and soon she found herself in the kitchens of Trident, The Oberoi, JW Marriott and ITC group of Hotels.

Recently, we met her at ITC Maratha where she is offering a menu titled ‘Rajaoupacharam’, a Sanskrit word that means King’s feast. Through this menu, Bala takes the patrons back to the times of Imperial Kings from South India as she picks recipes from royal kitchens of the 9th century AD to 16th century AD and offers a seven-course meal.

The thali (a set menu offered in a big plate) available in vegetarian, non-vegetarian and sea-food options feature forgotten recipes from dynasties of Chola, Kakatiya, Vijayanagara and Sethupathi. We went for a vegetarian thali and were offered two drinks - Nannari, a drink made from Sarsaparilla root extract, and Pathimugan, a drink prepared from Sappan wood. While the former was a refreshing welcome drink which acts as a palette cleanser, the latter was a hot concoction made of herbs and was meant to be consumed in small sips during the course of the meal.

We were then introduced to the starters - Masaleyukta Hasi Halasinayaki Undde, a spicy jackfruit dumpling which was very spicy, and Banana Pancakes which were mildly sweet. As we moved towards the main course, chef Bala tells us that she hasn't used green and red chillies as they hadn’t arrived in India. “Black Pepper is the main spice factor as it was one of the main ingredients available at that time,” she informs as she goes on to explain how one has to begin the main course with Benne Chikitse Anna, herbs and butter infused rice that prepares the body for the subsequent non-vegetarian dishes, and end with Mossuru Bhutti, a curd rice dumpling with spicy green chutney, as it acts as probiotic. 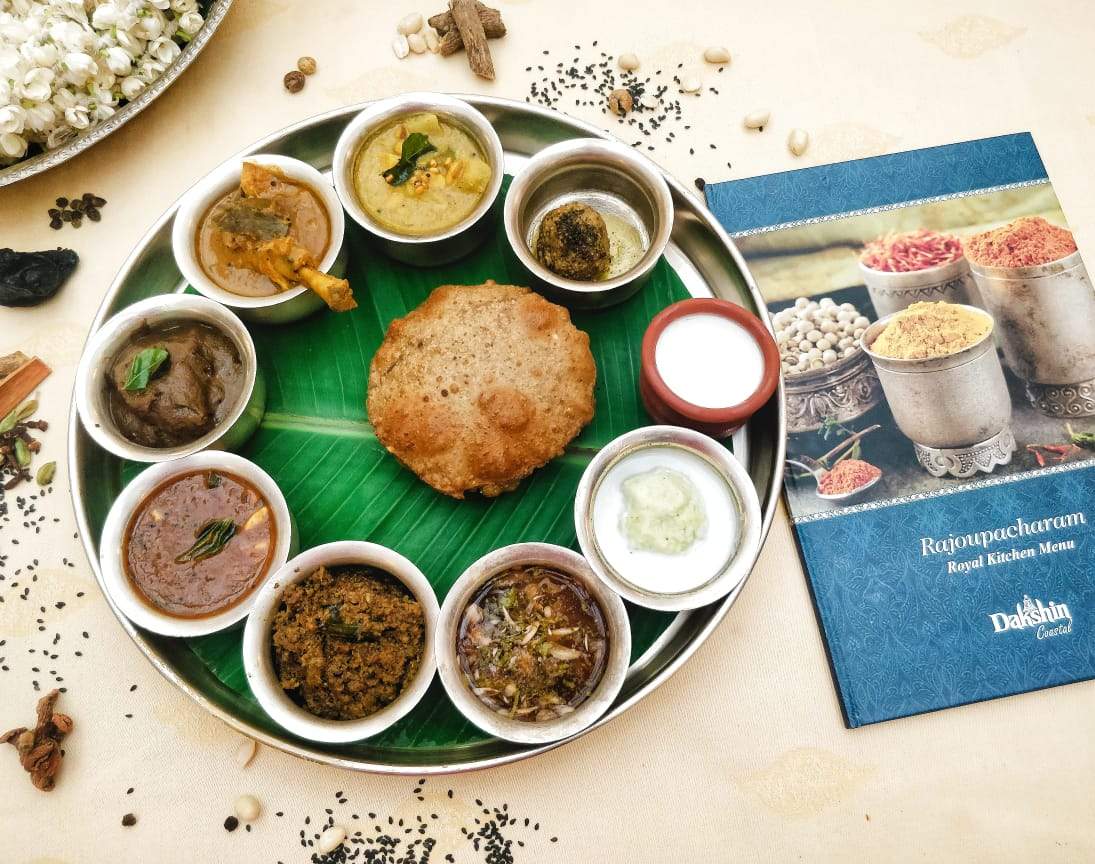 The main course included Iddalige (a poori), rasam and several curries. “These curries are prepared to keep in mind the six dimensions of tastes, five elements of nature and seven chakras of the human body so that it does not provoke the ayurvedic doshas namely the Vata, Pitta and Kapha” informs Bala, who is currently pursuing her PhD in food history. And, while we have no complaints from any item, the highlight of the main course was Kootan Suru - a pot meal prepared with vegetables and rice, encased in lotus leaf. It used to be a takeaway option for the royals and was a delicious meal in itself.

Although we were pretty full by now, soon arrived three bowls of desserts - Akki Bele Payasa, a pudding made from lentils, rice and jaggery; Paruthipal Pongal, a pongal dish prepared from the milk of cotton seeds and palm jaggery; and, Pathir Peni, a vermicelli kheer with nut milk and surprisingly, they all were mildly sweet.

As part of ITC's initiative, 'Kitchens of India: Royal Repast', this menu is available at Dakshin Coastal until November 30.