The smart speaker is the first step many take while adding ‘smarts’ to their homes, and the space is the hottest and most competitive we’ve ever seen. Google has its Nest Audio out; Apple’s got the smaller and more affordable HomePod mini and Amazon has taken its Echo speakers through the biggest design refresh the lineup has seen since inception, all in the span of the last couple of months! Up first is Amazon’s Echo and Echo Dot (with clock) – let’s get the ball rolling, shall we? 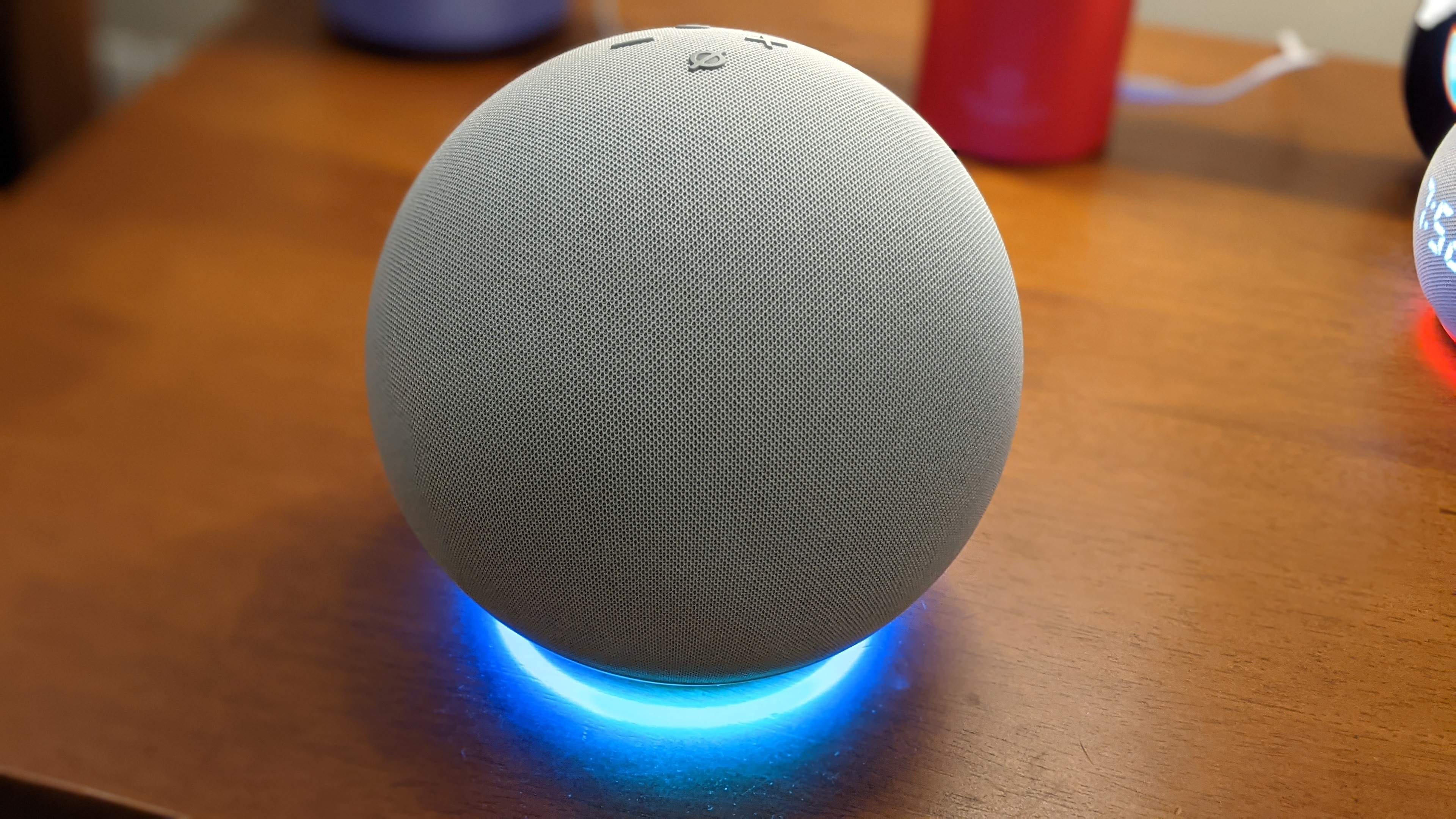 Calling this a design overhaul does not even scratch the fabric-lined surface of the new Echo – out goes the cylinder shape that one tends to associate with Echo (and other) smart speakers, replaced by a spherical 5-inch ball with a flat resting side. You can get the fabric exterior in black, white and a light blue, and the top of the dome has the familiar volume, mute and Alexa buttons. The Echo connects over Wi-Fi and directly over Bluetooth for streaming music and can itself push its audio out to a bigger sound setup over a 3.5mm output. The change in design moves the signature LED light ring to the base of the sphere, and the colours indicate when its listening, when its muted and the current volume level for the speaker. With its new position at the base, the LED light ring is more difficult to discern from across the room, but it casts a lovely glow on whatever surface you place it. I like the shift in design to a slightly more human, more welcoming aesthetic than the industrial design of Echos of yore, but where the previous generations melted into the background, the new one catches your eye no matter where you place it in the room. Interestingly, the Echo has a tripod screw-mount on the bottom in case you want to…I guess…mount it on a tripod. The spherical design allows Amazon to fit in two 0.8-inch tweeters alongside a 3-inch woofer for the highs and lows. Bear in mind, the sound is a lot more directional than previous generations, which means you have to be in front of the speaker to be in the sweet spot, and not 360-degree audio as the shape might suggest. Ergo, this can’t be placed as a centerpiece, and is best with its back against a wall. The upside of the extra internal space that has been afforded is the big boost to audio quality and volume, hitherto unusual for a speaker in this price segment. Music emanating from the Echo is more room-filling than before (and more than the Nest Audio), and the Echo borrows from the room tuning smarts that are seen in more expensive speakers to estimate the shape and size of the listening space and adjust the audio accordingly. Plus, there’s tuning by Dolby Audio, but one can’t really discern the difference these features make – they can’t be turned on and off – except to say that the sound is significantly louder, with a pleasantly wide soundstage. Even though its plenty loud for most mid-sized rooms, you can pair two Echo speakers for a much wider and better stereo-separated experience on your Fire-TV-connected TV.

In terms of sound performance, the Echo delivers capably for the price segment, allowing detail to come through in a more pronounced fashion than the previous models and even edging ahead of the Nest Audio on all but the highs. There is a definite bass bias in the Echo’s output which will please listeners of most genres, but it comes at the expense of the vocals and mids on some tracks. Speakers like the HomePod and the Echo Studio which cost twice as much aren’t under threat by the Echo, but it does well for the sub-10,000 segment.

As a smart speaker, the Echo builds on the strong Alexa feature set and the widest ecosystem of compatible accessories – unlike the Echo Dot, there’s a built-in Zigbee hub in the Echo to control compatible smart home devices without having to add a separate bridge. There’s even a temperature sensor, which you can use in creative ways to switch on a connected fan like the new Alexa-friendly Dysons. Speaking of Alexa, the Echo processes commands noticeably faster, and Amazon’s addition of the AZ1 Neural Edge chip (which isn’t even enabled as yet) will only boost this further. All your music requests, setting the timer, asking questions (even the inane), all get served up faster. If you’re feeling chatty, head on over to the Alexa app on your phone and enable the “Follow-up Mode” in device settings so you don’t need to repeat the Alexa wake word after you’ve asked a question and it has responded. Alexa will automatically listen for a few seconds if you have a follow up question, a small improvement that’s super practical and very conversational in day-to-day use.

All in all, the Echo 4th generation is a solid upgrade from the previous generation, and a good mid-range choice that not only handles the smarts well but also is a legitimately good sounding speaker. It’s a great starting point for building out your serious smart home, and even for folks who have a previous Alexa speaker in your home, say a previous Echo or Echo Dot, this is an upgrade seriously worth considering. 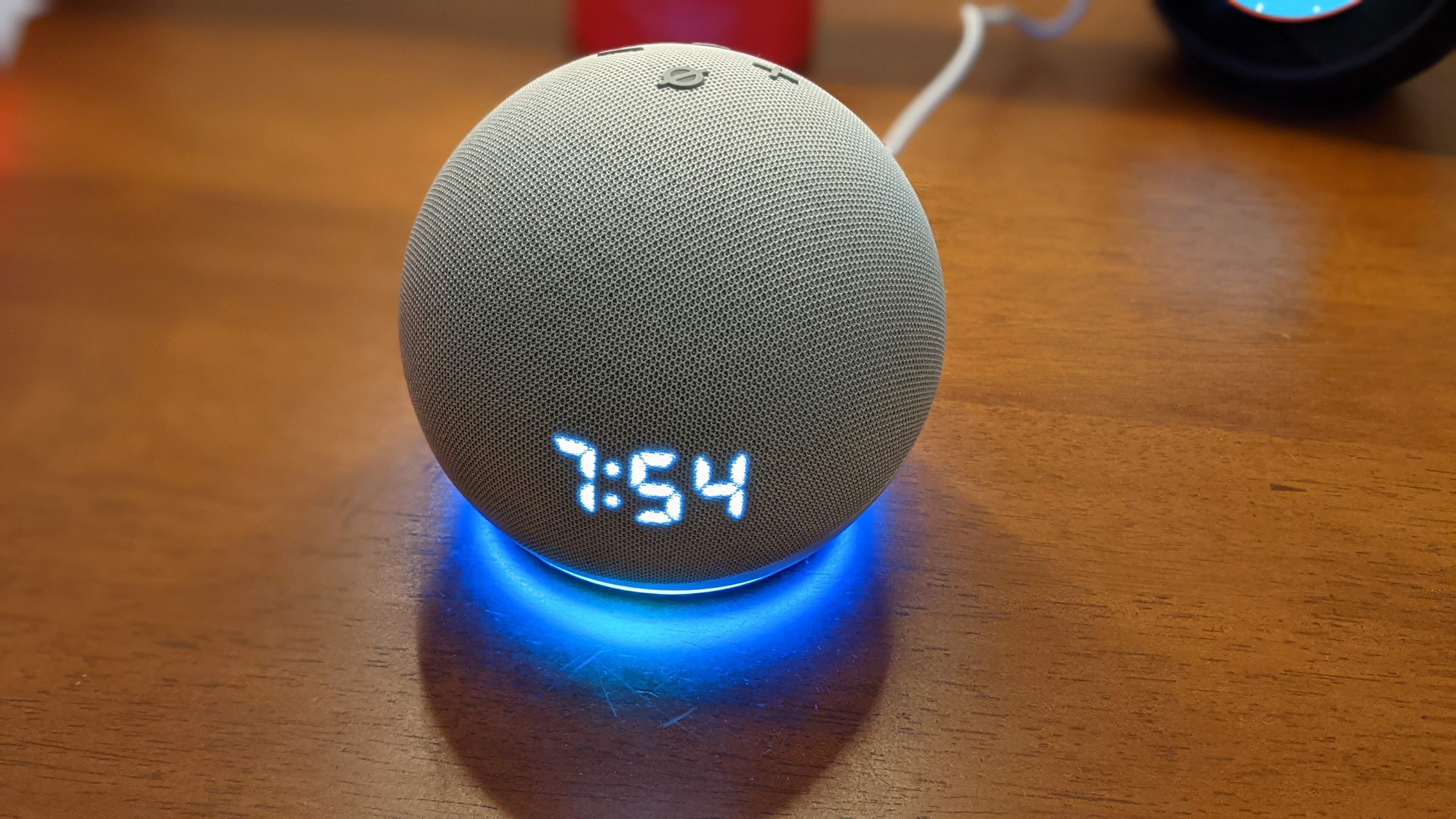 As the entry-level speaker in the Echo family, there’s no surprise that the Echo Dot and its LED-clock-toting variant are the most popular ways for folks to test the waters with the Amazon ecosystem…and for the more committed, put one in every corner of the house. No surprises then that the little Dot got the same sphere-treatment as its pricier sibling, with the same flattened ball design, only shrunk down in size. In fact, it’s difficult to tell the two apart in pictures unless you have the clock variant you see here - same signature LED light ring, same button layout. As with the larger Echo, the design takes a big leap forward from the hockey puck design of the 3rd generation, but the spherical shape screams “look at me” in just about all but the most eccentric of home setups. You get a 3.5mm line out to connect to a larger speaker, but it doesn’t double as a line-in like the bigger Echo. 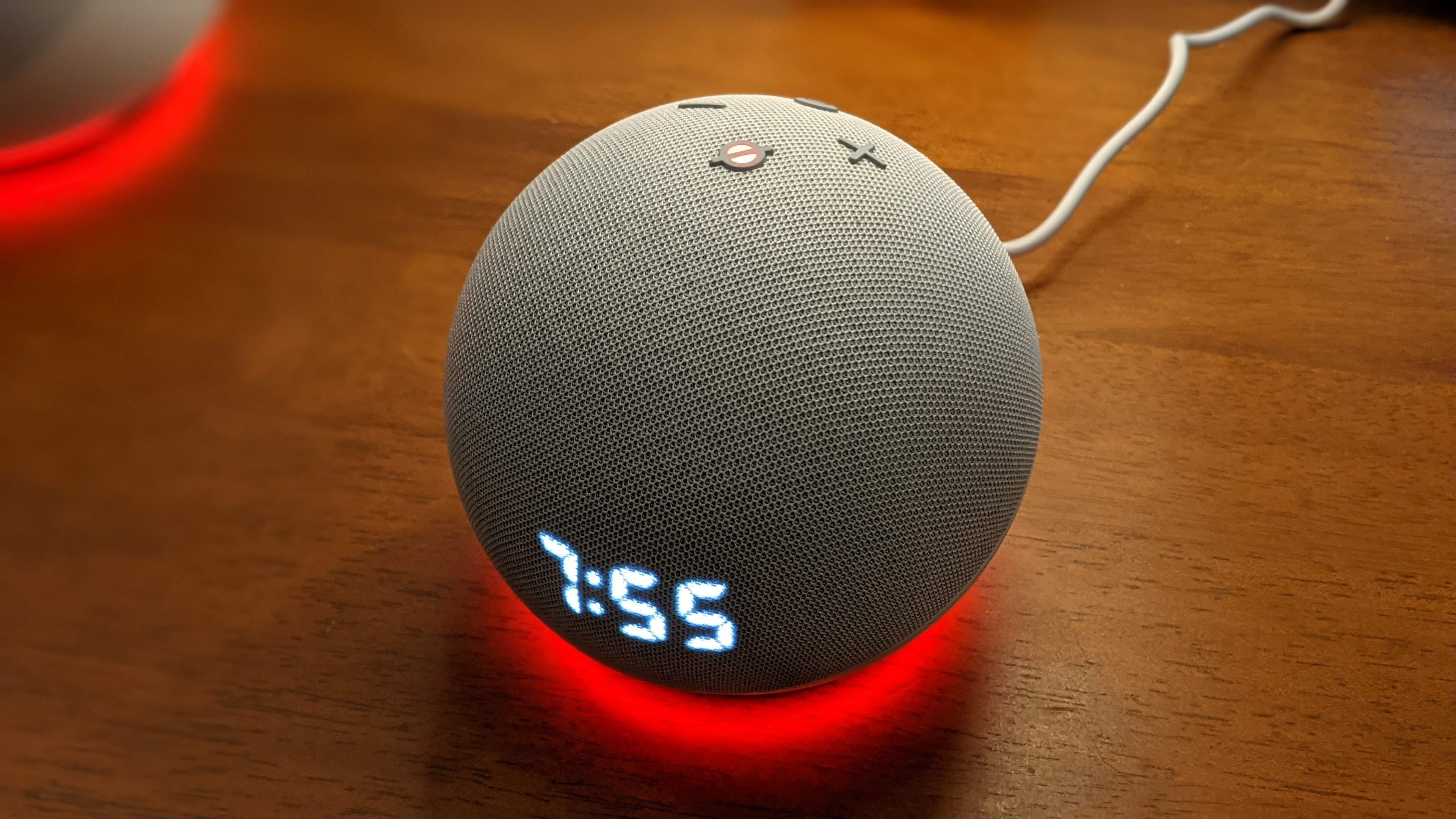 Even with the new look, it’s not a whole lot different from the 3rd generation, audio quality wise. Amazon has kitted the Dot with the same single 1.6-inch mono speaker which, thanks to the new design, sounds a tad fuller and with a slightly bigger soundstage, but you only really tell if you have both at hand to compare. While you can pair two Dots for a stereo pair, there’s none of that fancy room tuning or Dolby Audio processing of the Echo, which isn’t a surprise at its price point. The sound can get loud and pretty good for a device its size and price, but it’s not as big an upgrade from its predecessor as the Echo is. Of course, since it lacks a dedicated woofer, it lacks the bass response, and the treble is muted as well, but vocals in songs and podcasts are spot on. This is not a party speaker – it’s fine for casual listening as as long as you understand its emphasis on ‘smart’ over ‘speaker’, you won’t be disappointed.

If you’re willing to spend a bit more, consider the Echo Dot with a LED clock built-in – it’s great for a bedside clock for your alarms and some soft music, the LEDs show you the time and basic information like volume levels or temperature outside (only when you ask), and it doesn’t have a camera like the Echo Show series. The Echo Dot remains a solid recommendation for an entry-level smart speaker, with decent audio for its size and price, all of Alexa’s smarts (sans the smart home hub) and at a price that lets you toy with the concept before you splurge on a serious smart speaker. 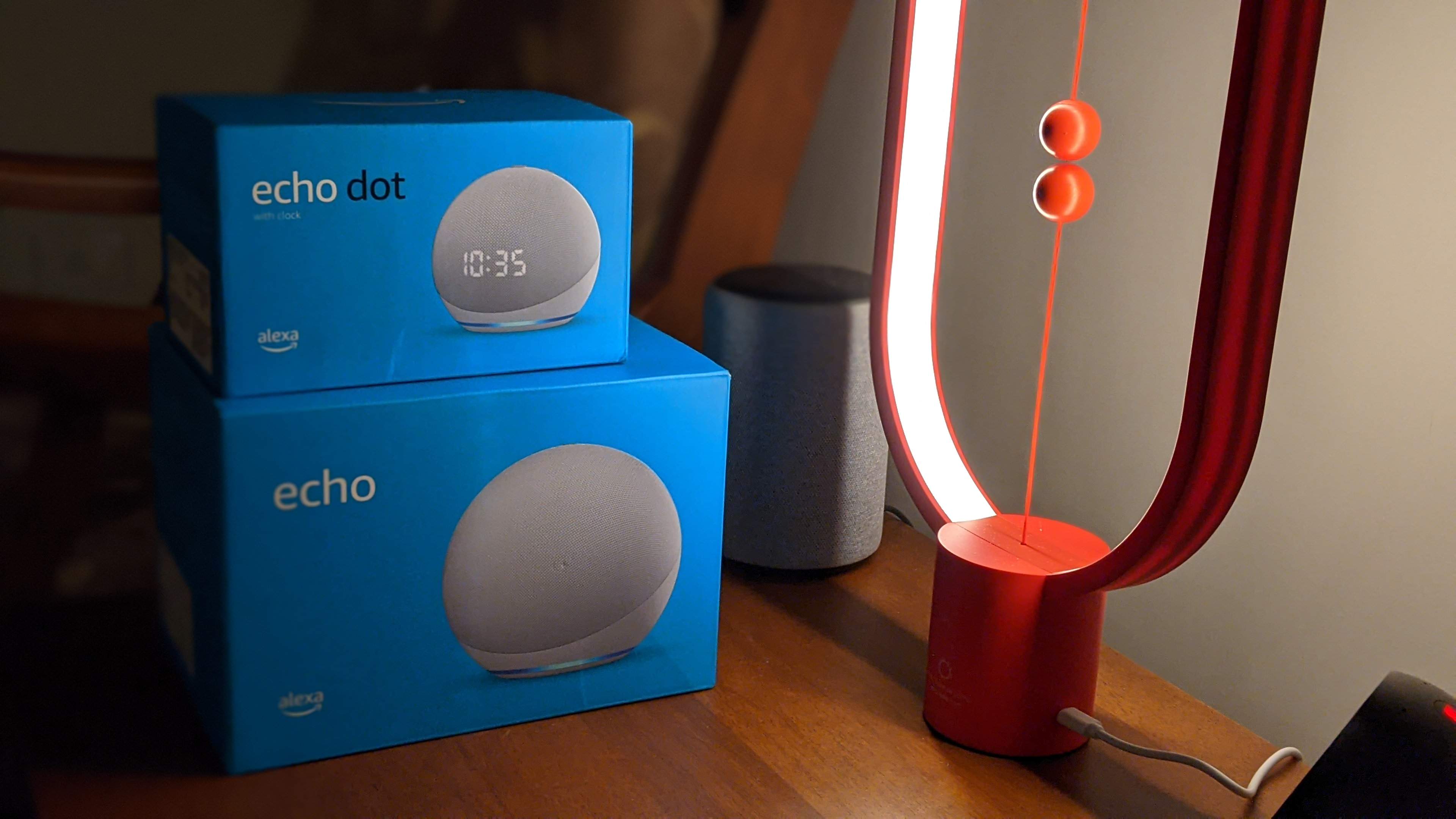 It’s fairly straightforward – the big difference between the two (aside from the cost and size) is the sound quality and the smart home hub. If you’re looking for basic smart home capabilities without breaking the bank, the Echo Dot or Dot with clock will suffice. Folks who like listening to music and those who want their smart speaker to hold its own in small get-togethers will clearly side with the larger Echo – it pumps out louder, better sounding music and is a better bet in larger rooms.

Cons: Bass overpowers mids and vocals on some tracks

Cons: Audio quality not an upgrade over previous generation