Samsung’s Galaxy S Series has been, through all of its ups and S4-level downs, an indispensable part of Samsung’s portfolio for well over ten years now and the Ultra, introduced last year, was meant to be the most most non-foldable phone you could buy from Samsung, the Pro Max of its lineup, if you will. 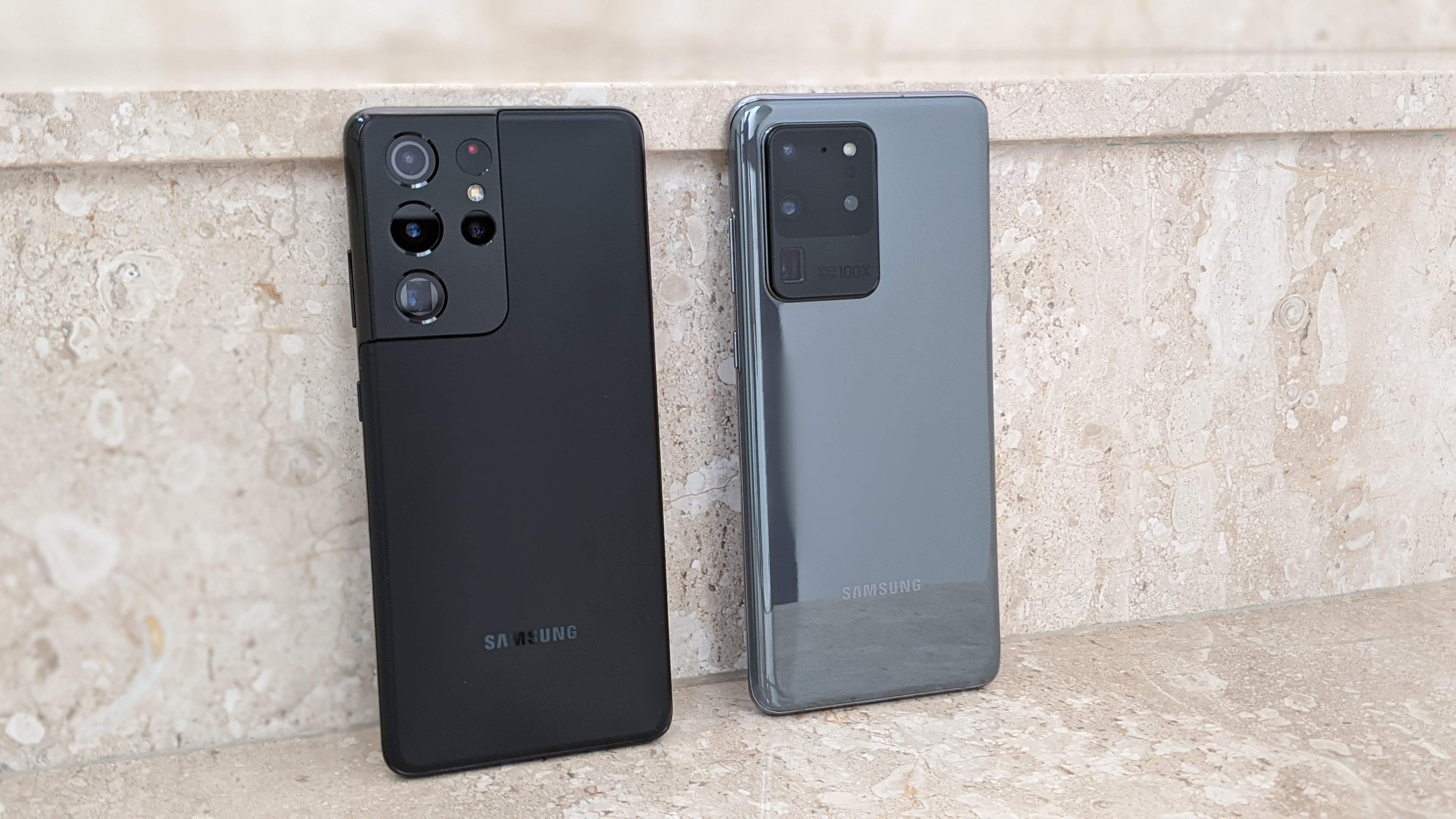 What launched finally, the S20 Ultra, stopped short of delivering on that promise - the big zoom on the camera didn’t work nearly as well as intended, the design was bulky and lacked the premium appeal that one expected at the price…and the Exynos 990 chip on Indian variants made short work of the otherwise large battery. With the Galaxy S21 Ultra, Samsung’s gone after each of its predecessor’s weaknesses with a vengeance… to try and create the uncompromised superphone that, quite frankly, we all deserve right about now. Has Samsung pulled it off? Has Samsung made an Ultra worthy of its name? Short answer? Hell yeah! Let’s start with the elephant in the room, the proclivity on Samsung’s part to skip the top-tier Qualcomm Snapdragon chip for its own in-house Exynos chip for many regions across the world, India included. Now, Exynos-powered phones are great in the mid-range, but when you’re paying top rupee for a premium flagship, you’re right in expecting little to no compromises on performance. Premium flagships like the Note 20 Ultra and the S20 Ultra packed in the Exynos 990 chip which, while it did offer flagship-level performance, was power-hungry and was prone to overheating…exactly the kind of niggles that raise an eyebrow when you’re paying nearly a lakh for your phone.

The Exynos 2100 changes that. It’s based on the same base design as the Snapdragon 888 and in my testing, Samsung has chased away the ghosts of its past with this chip...with aplomb! Not only can you run games like Call of Duty Mobile and Asphalt 9 with settings turned on all the way high, but you also do this without the hit of temperatures rising during extended gameplay sessions. And of course, the phone is snappy in day-to-day use, handles pretty much anything you throw at it without the figurative “breaking a sweat” and multitasks like a champ with the 12GB of fast LPDDR5 memory. What’s interesting is that Samsung has gone with 256GB of the fastest UFS 3.1 storage, so you’re getting near SSD-levels (upwards of 1800MB/s) of storage performance! Insane stuff. And none of these performance and thermal gains come at the expense of battery life, thanks to the power-sipping 5nm Exynos 2100 and OneUI 3.0’s battery-saving optimizations. Over my week of use, I saw screen-on-time figures on the 5000mAh battery last past six hours regularly with the screen set to quad HD+ resolution and the adaptive refresh rate up to 120Hz, and well past eight hours if I was conservative (with full HD+ and 60Hz). Samsung has well and truly turned the corner here, to the point where I can happily recommend this phone to the performance-seeking crowd with adding the regular caveats around performance and longevity. OneUI 3.1, based on Android 11, is as refined as they come, with useful features like DeX and a cleaned up yet feature rich user interface that’s second only to Oxygen OS. (See the Tweets by the author here)

The other bit that makes the Ultra a notch above the regular S21 series and quite frankly, among the top cameras across the board is the camera setup that Samsung has packed in. There are no filler elements here, no padding by way of a macro shooter or a depth sensor, just four honest-to-goodness cameras (aside from the 40MP selfie shooter).  You get a 108MP primary shooter, two 10MP telephoto cameras (with 3x and 10x optical zoom), a 12MP ultrawide, along with a dedicated laser autofocus unit and OIS on the main and the telephoto cameras. In good light, stills are sharp on the new HM3 image sensor and color saturation is reined in impressively to avoid that unnaturally colored look that one saw on the S20 Ultra. Dynamic range is improved as well, with highlights exposed properly and details coming through in the shadows. Low light images, both landscapes and portraits, are fantastic and you get the benefit of brighter images without excessive noise creep – the Night mode really does well to bump up the brightness, particularly on the primary shooter. The ultrawide, on its part, is sharp and colors are consistent with the main shooter. Samsung has a few new software tricks, from Focus Enhancer (which switches automatically to the ultra-wide when shooting up close) to the Director’s View which showcases the raw power of the Exynos 2100 by bringing in simultaneous camera feeds from all the phone’s cameras and letting you combine the front camera with any rear camera of your choosing for your final video. Speaking of which, you can shoot 4K video at 60fps from the front and rear cameras and crank it up to 8K video at 24fps. 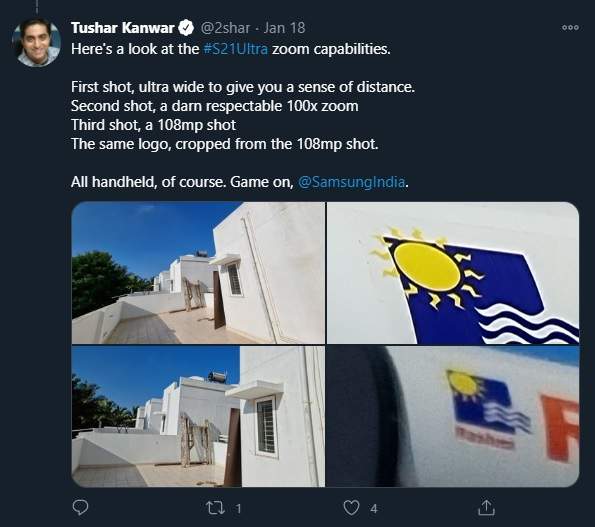 Where the S21 Ultra really shines is in the zoom department. It now has two telephoto lens – a 3X optical zoom lens that combines with digital zoom to go all the way to 10X, and a new 10X optical zoom lens that goes all the way to 30X and beyond to 100X for those super zoomed-in shots. Up till 30X, you get extremely usable shots, and given good light and a stable pair of hands, you can push all the way out to 100X and still manage better shots than cropping the full 108MP resolution shot. 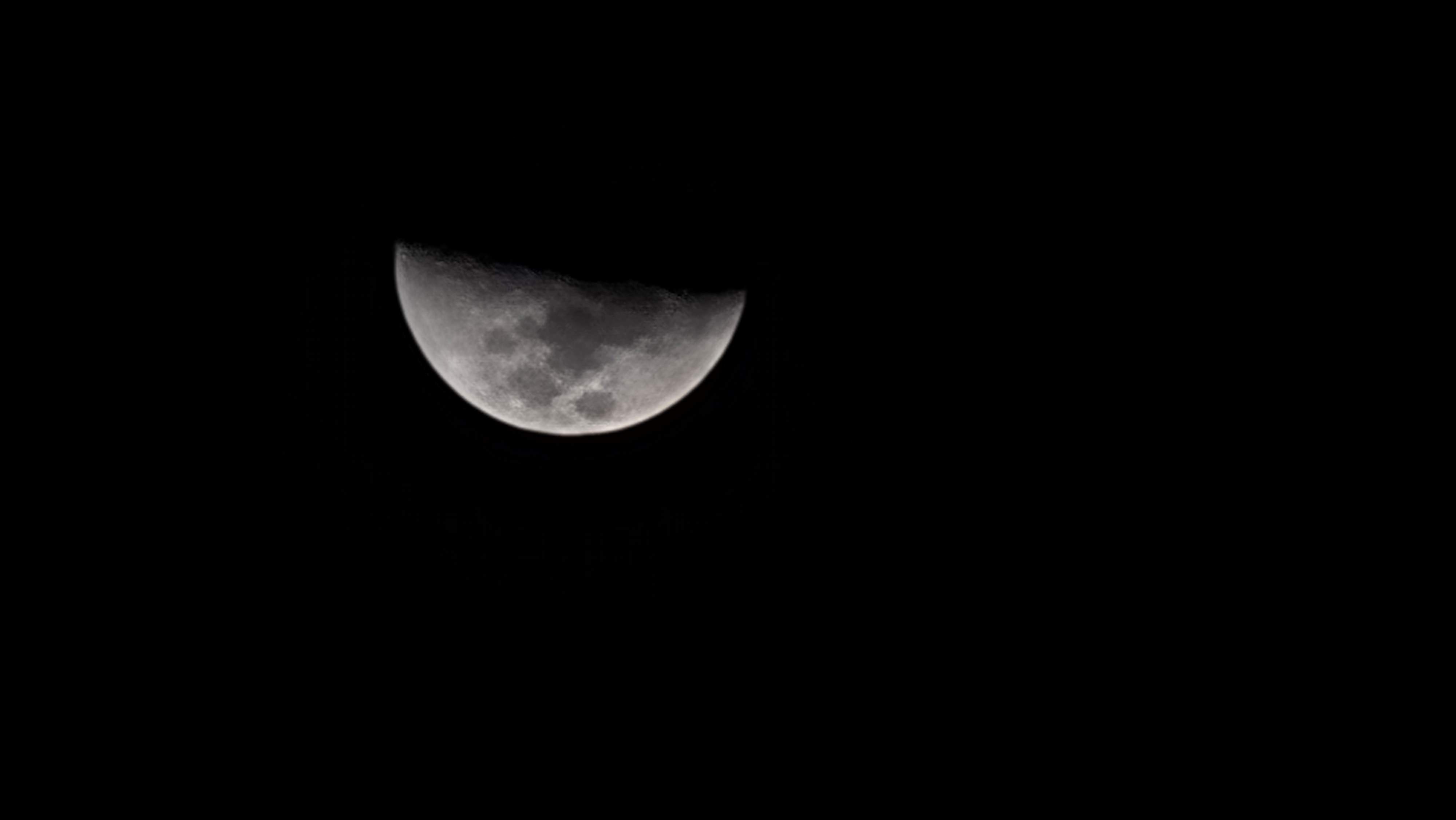 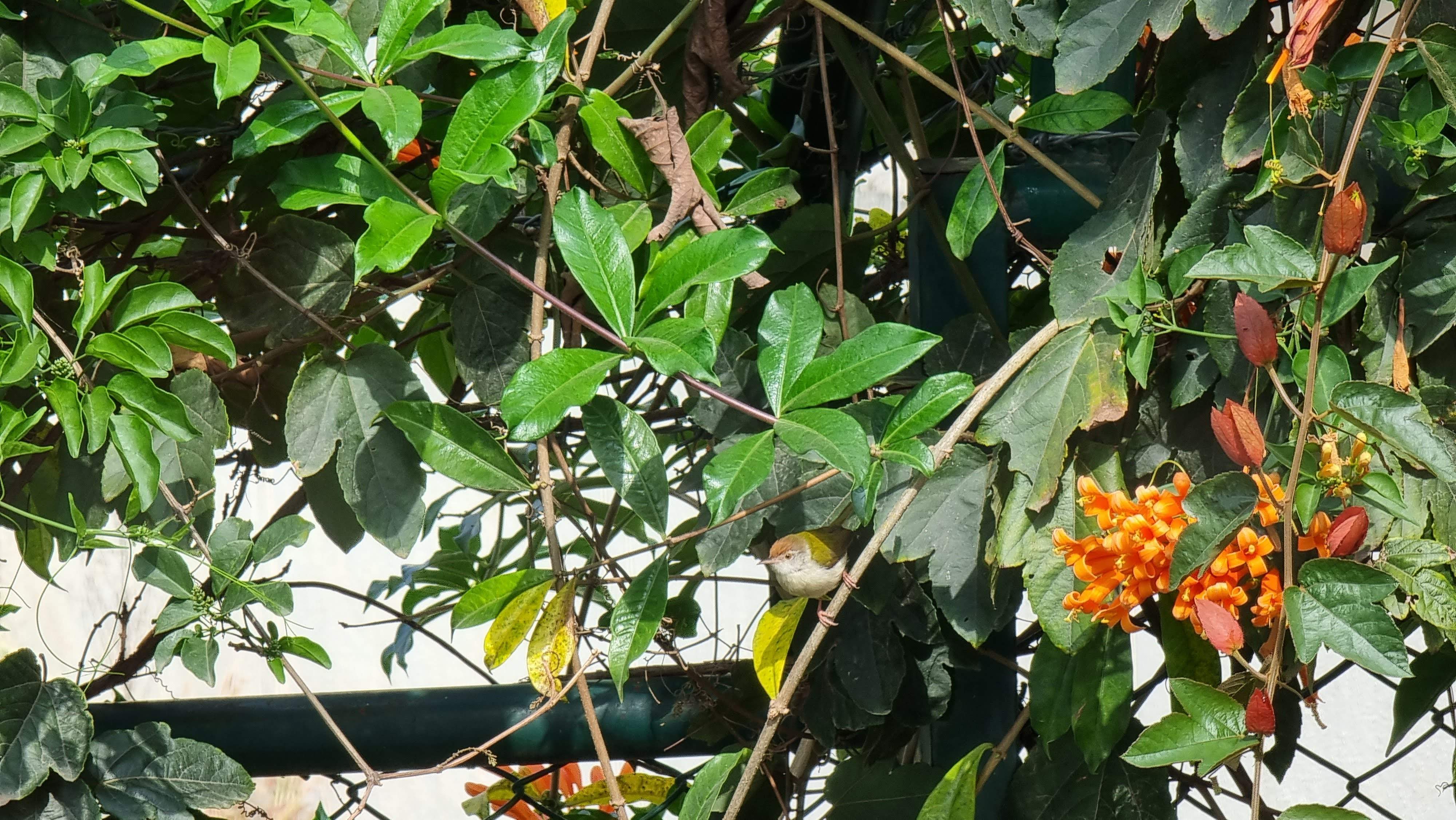 Last year’s S20 Ultra’s 100X was barely usable, but there’s a new Zoom Lock feature this time around that locks focus on the subject when you go beyond 30X, allowing you that extra second to take a stabilized shot. You can take images zoomed all the way in (like the shot of the moon) handheld, which is quite something! The S20 Ultra’s zoom capabilities make it overall a more versatile phone camera than the iPhone 12 Pro Max, although everyday walkabout shooting would yield photos that are subjectively better or equal to the iPhone. 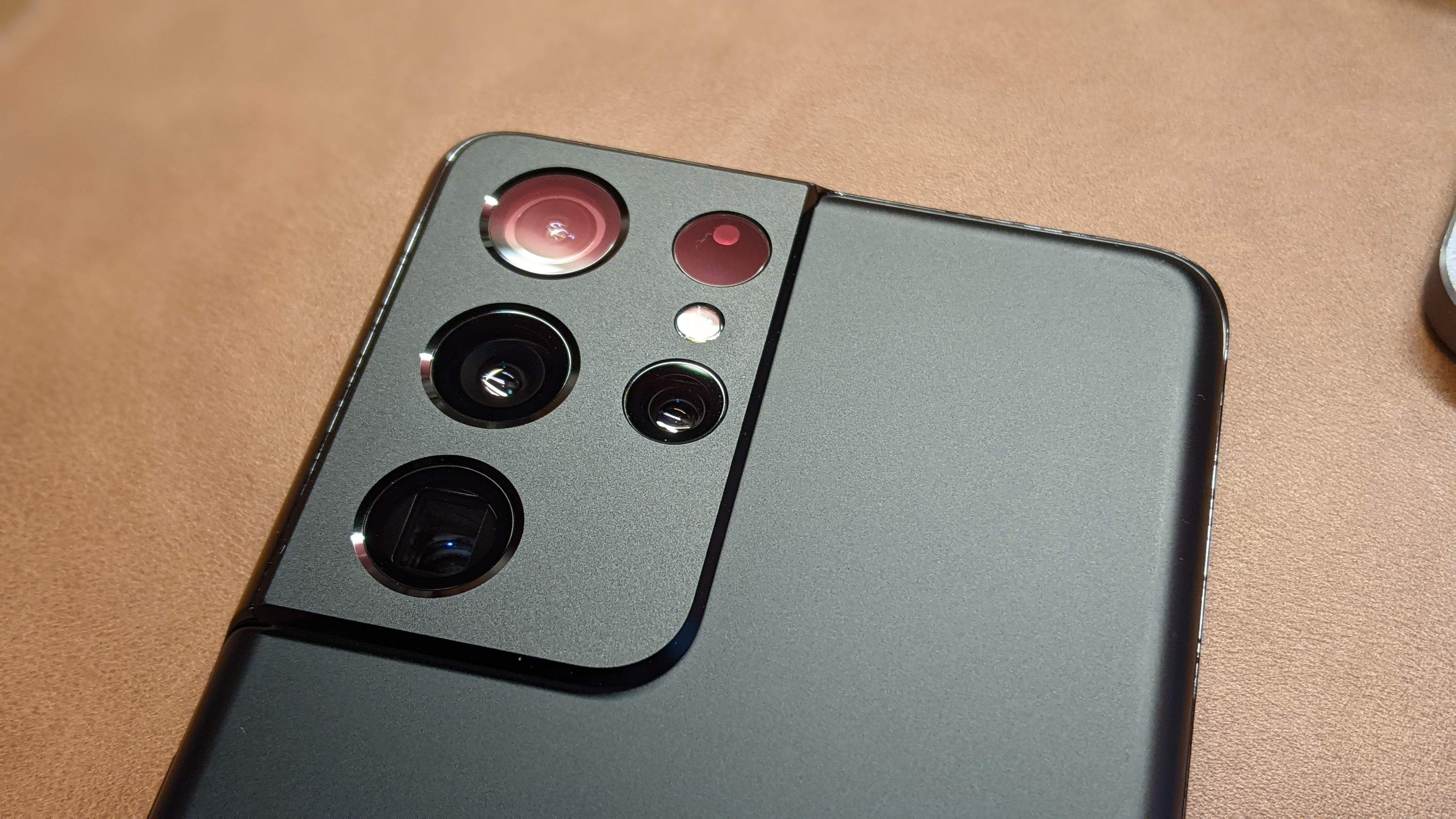 Make no mistake about it – the S21 Ultra is a massive phone, with a screen that measures 6.8-inches diagonally, yet it feels more comfortable to hold in the hand than the slightly smaller iPhone 12 Pro Max with its curved edges. That said, this is a top-heavy phone and you feel it each time you pick it up, and then there’s the matter of the camera-bump-wobble when you place it on a flat surface. 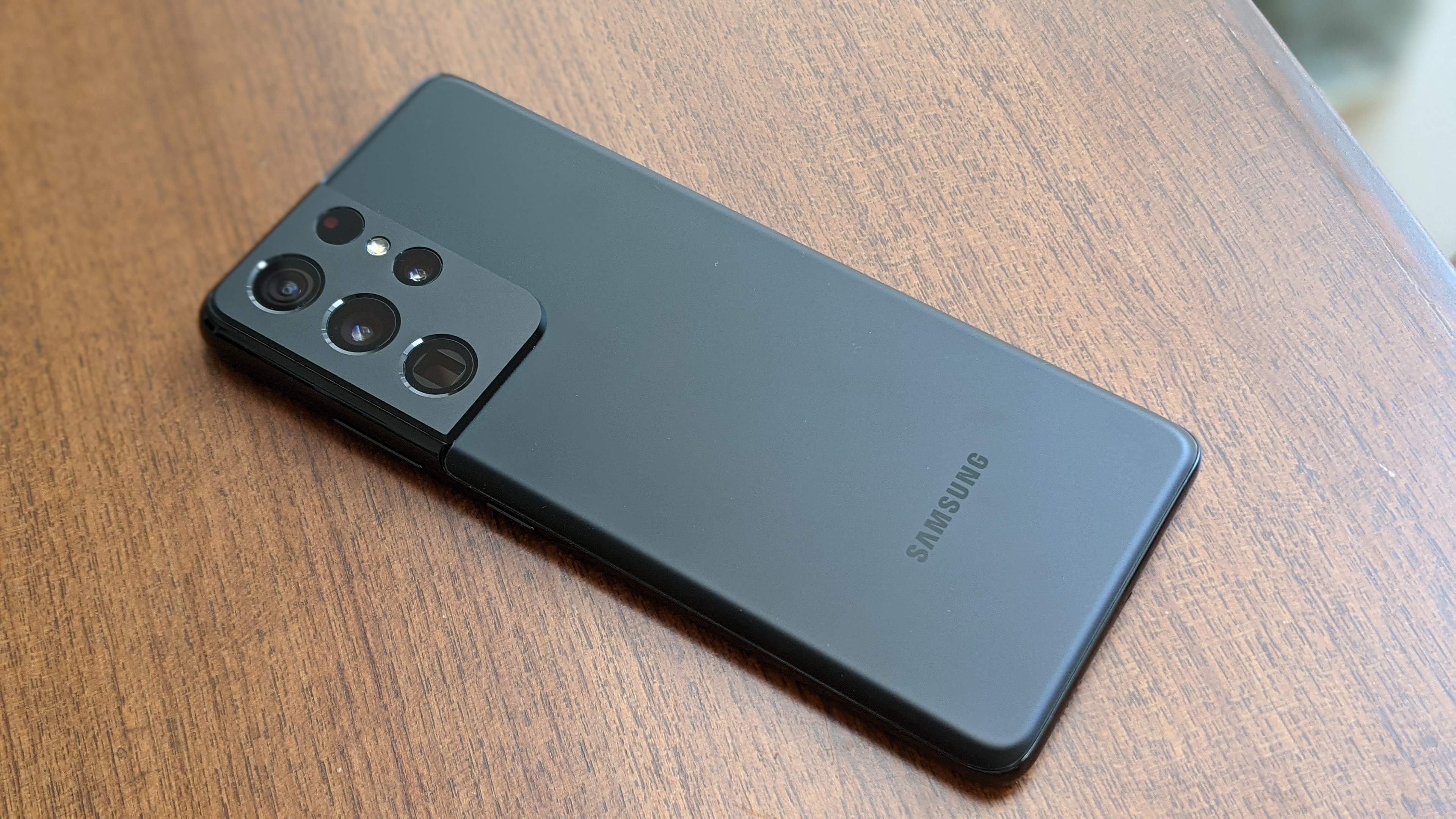 Yet, where the S20 Ultra looked staid and seemingly undifferentiated in design to the rest of Samsung’s lineup, the S21 Ultra, with its matte glass finish a la the Note 20 Ultra and Gorilla Glass Victus protection on the front and back, gives the phone just the premium appeal that the doctor had prescribed. The way Samsung has blended the camera island on to the Phantom Black colorway is stunning and a masterclass in how to tastefully add in big camera elements and make it look natural. Everything about the phone is typical Samsung flagship – exquisitely crafted design, great button feedback, IP68 protection – except for the two major omissions this time around – the microSD card slot and the Samsung-exclusive Magnetic Secure Transmission (MST) tech in Samsung Pay. Personally, I’m equally used to the iPhone/OnePlus school of thought so the microSD card isnt as big a deal, but dropping the latter, what is undeniably a core ecosystem play that keeps many Samsung users (myself included) coming back for, is a bad move. How much this impacts you will vary from one person to another but I for one lament this decision. 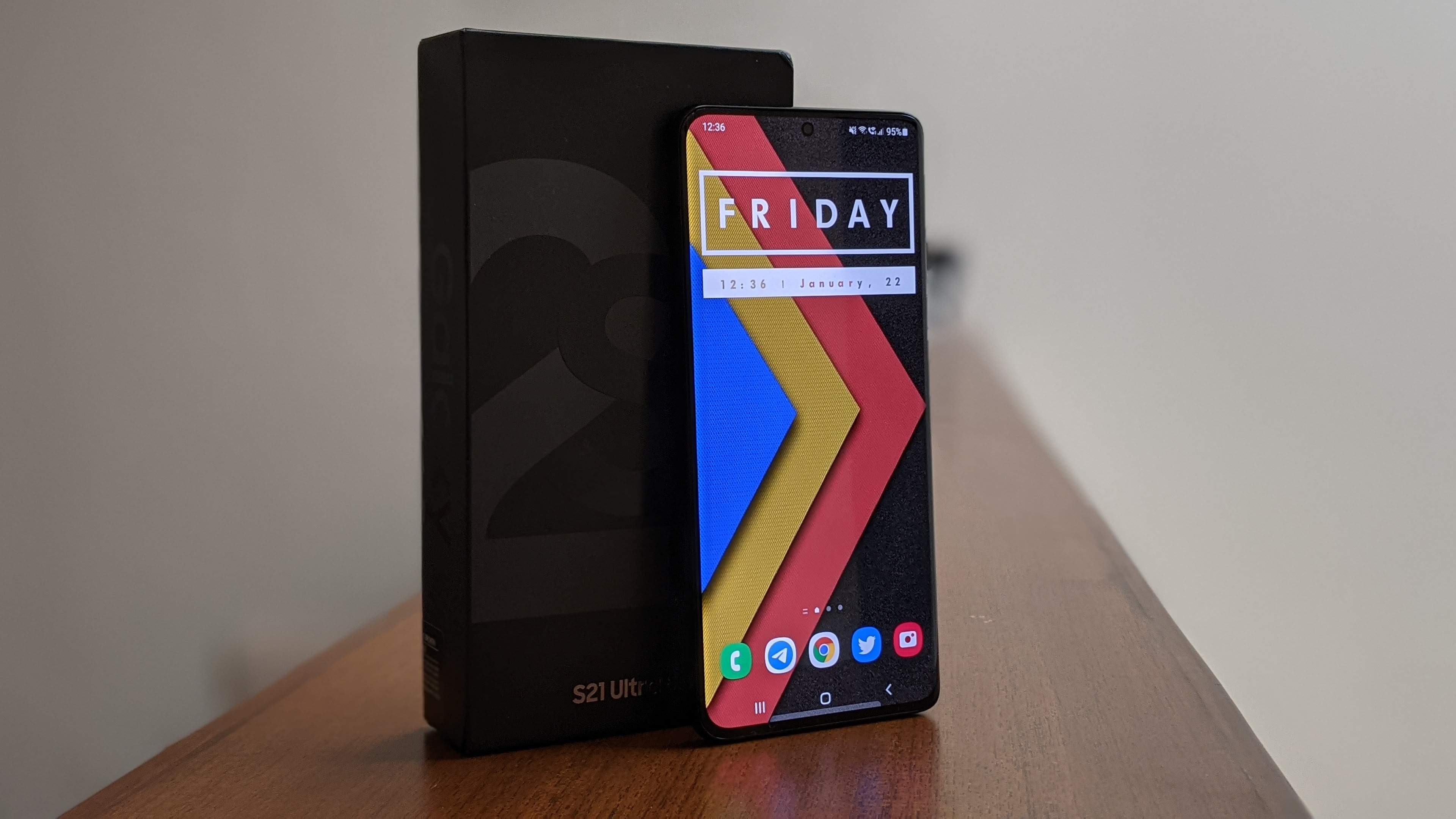 Closing out this ultra-sized review is the S21 Ultra’s display which is a great showcase of how far ahead Samsung is in the display game. Quad-HD+ resolution which can be used alongside the adaptive refresh rate that goes from 10Hz to 120Hz, 1500nites of peak brightness for the best HDR playback you can find on a phone, exceptional haptic feedback and the all-new S Pen support (if you have an S Pen from the Note Series lying around) – this is Samsung flexing hard on the rest of the industry.

A side note about the charger situation, rather the lack of it in the box. You’re going to have to resort to using other USB Type-C chargers to top up the phone in an hour, a move that I felt was questionable at best even when Apple made it first with the iPhone 12 series. What I found more add was that the maximum supported charging speeds are still capped at 25W. In the Android side of things, that’s positively glacial for a phone which is otherwise such a great showcase for all things bleeding edge. 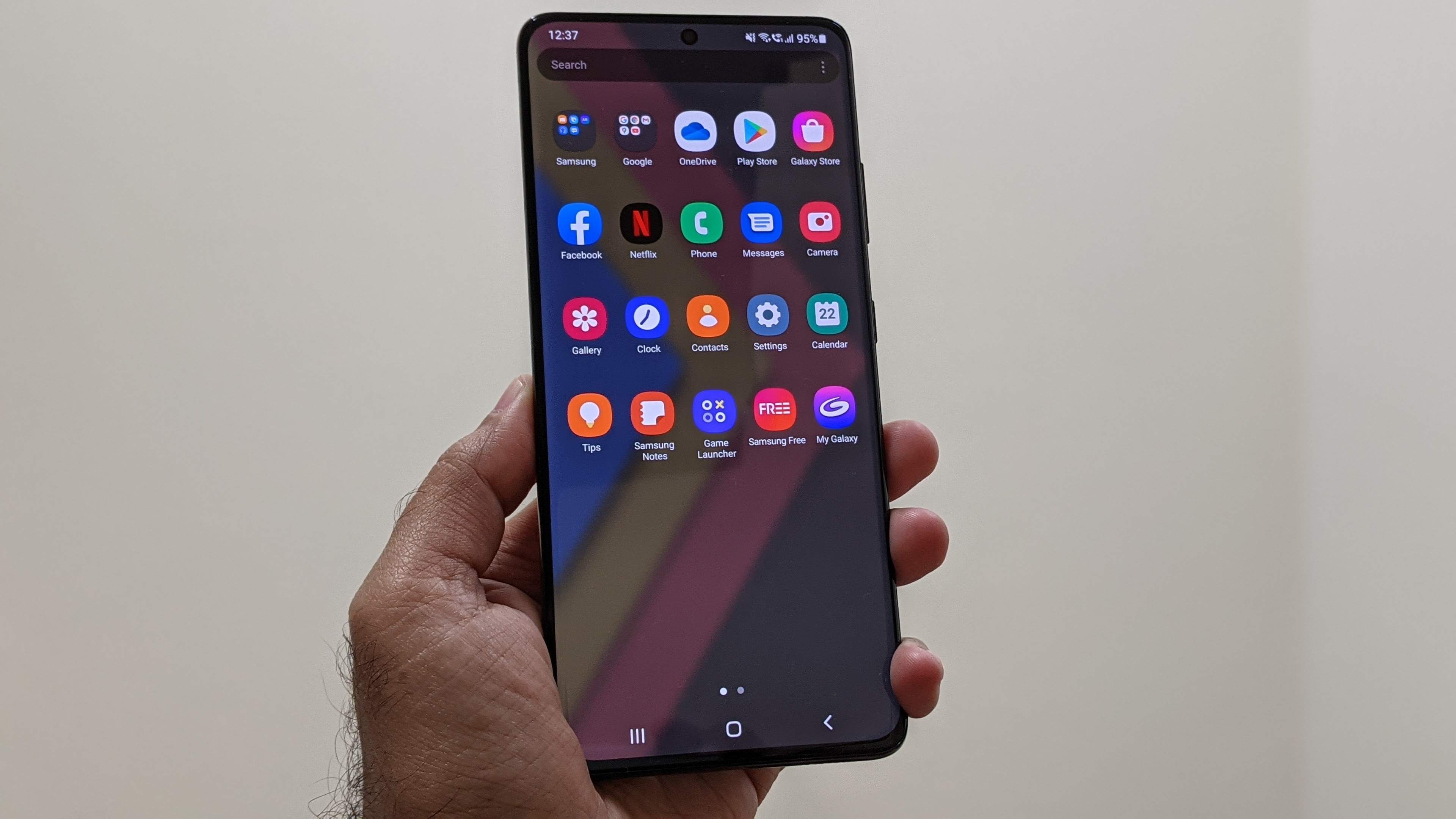 At a starting price of Rs. 1,05,999 for the 12GB/256GB variant I tested, this is as premium a flagship as they come, with a price tag to match. It is by far the most refined, polished flagship I have seen from the house of Samsung - I use a Note 20 Ultra on the regular, and this one has managed to shine past that one as well (particularly by sneaking in that S Pen support)! I’m downright impressed on the three major pillars of improvement in the S21 Ultra – the performance/battery, the design and the cameras – and it shows Samsung is listening to feedback. The foibles it has are likely minor to most folks, and anyone choosing the S21 Ultra will be more than rewarded for years to come.

Cons: Lacks expandable storage and MST, still a chunky phone for smaller hands, no charger in the box, only 25W fast charging