Mission impossible! Well, this isn’t a plug for the upcoming installment of the film series due
in 2018. This was our view of the task at hand — driving to The Druid Garden at Sahakarnagar to sample their new menu. The nearly four-month old eatery and brewery is located close to the road that leads to BIAL, so driving there from any part of the city is quite a task. 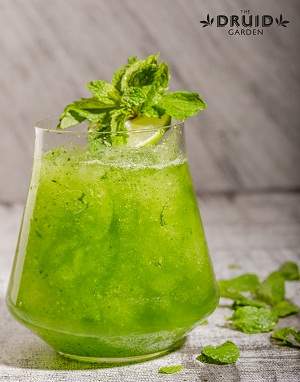 It was a Sunday when we dropped by for lunch to try the new menu. The long drive made us hungry and we immediately started off with two unusual mocktails — Coco Cauldron and Smoking Pistol. A concoction of fresh pineapple and orange juice topped with smoking rosemary (which is lit at the table), Smoking Pistol was the more impressive of the two. The pulpy texture  and mix of orange and pineapple flavours made this drink worth a try.
Oven to table
We started our meal with the Thai Tom Yum vegetarian soup and the Seafood Soup. The Thai soup was a tad bit spicy, definitely not for the faint-hearted. The seafood soup is for those who love their share of shrimps, crabs and calamari. The freshness of the seafood makes the broth delicious and delectable. From the mix of starters that we tried, the Tomato and bell pepper smorrebrod stood out. The crunchy rye bread base, we are told, was baked in-house, and we loved every bite of it. We paired this starter with Mary’s Little Wand — tomato juice and vodka, whisked with Oriental spices and topped with an ethereal cloud of celery. This cocktail complemented the bell pepper and rye quite well. Among other starters, it was the Chettinad Kozhi Roast with adai that turned out to be a winner. The blend of pepper, cumin, red chillies, coriander and fennel created the perfect dish. 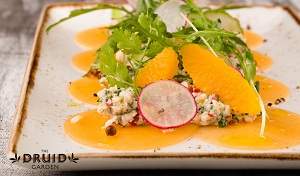 For main course, we tried the Spinach Ravioli. Though the chef seemed to have put in a lot of effort to serve up the perfect dish, it was a little too salty. But the soft, pillowy ravioli saved the day.
Dessert antics
From the desserts section, we tried The Unbeliever’s Dessert and the Hazelnut Torte. It wouldn’t be wrong to say that The Druid Garden gets its desserts bang on in terms of both taste and plating! The former has  black sesame cake and kaffir lime coconut sorbet with lemon curd and miso butterscotch. This elaborate and dramatic dessert cannot be missed. Just be prepared for a an explosion of flavours in your mouth. 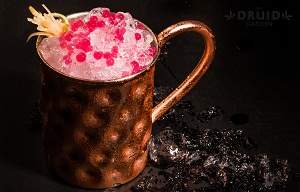 The new menu has other options like grills, Indian favourites, burgers and sandwiches as well, but we tried the chef’s recommendations, which were worth the long drive.