Actress Taapsee Pannu, who is currently busy with several upcoming projects in her kitty, has now signed up for a Telugu movie titled Mishan Impossible.

Directed by Swaroop RSJ, who rose to fame with his film Agent Sai Srinivasa Athreya, Mishan Impossible will mark Taapsee’s return to Telugu cinema after a gap of almost three years. She was last seen in Tollywood in the movie Anando Brahma (2017) and Neevevaro (2018). Taapsee was also seen in the bilingual film Game Over, which was released in 2019.

Mishan Impossible will be produced by Niranjan Reddy and Anvesh Reddy under the banner of Matinee Entertainment. The production house took to Twitter on Tuesday to announce the news about Taapse coming on board and wrote, “This ‘Mishan’ is surely ‘Impossible’ with out her. Welcoming the amazingly talented @taapsee on board for #MishanImpossible (sic).” 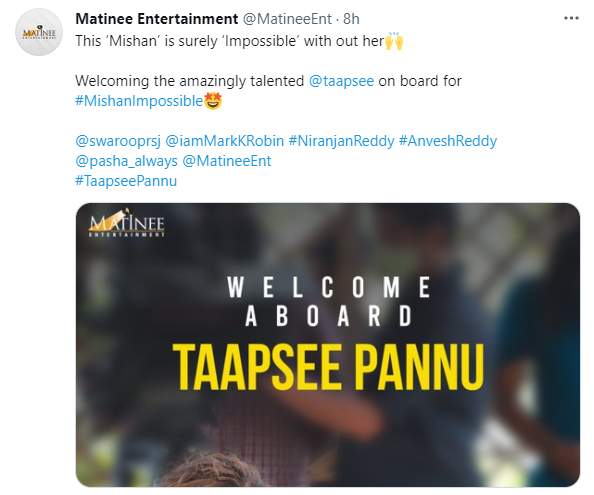 Also read: From Taapsee Pannu to Aditi Rao Hydari, here are six Indian actresses who made us fall in love with the magic of cinema

The photo shared by Matinee Entertainment shows Taapsee sitting and working anxiously in front of a laptop with her right hand in a sling.

Talking about why she agreed to act in Mishan Impossible, Taapsee said in a statement, “I am always on the lookout for stories that I would want to see as a viewer. Mishan Impossible is one such film and has an impressive storyline. I want to reaffirm the trust the audience has in me by choosing quality films (sic).”

She will be seen next in a biopic on Indian cricketer Mithali Raj, titled Shabaash Mithu. Taapsee has also signed up for a thriller movie with Section 35 director Ajay Bahl.