Kangana Ranaut and Taapsee Pannu's war of words has begun again. Taapsee who has been actively promoting her upcoming movie Haseen Dillruba that releases this Friday on Netflix apparently commented on Kangana Ranaut in an interview.

According to media reports, when Taapsee was asked if she misses Kangana on Twitter, the former said the latter is "too irrelevant" to her personal life. Kangana's Twitter account was permanently suspended last month for repeated violation of rules, specifically violating its Hateful Conduct and Abusive Behaviour policy. It's further reported that Taapsee said, "I don’t miss her. I didn’t miss her or want her before also. She’s too irrelevant for me, in my personal life. She's an actor, she's a colleague in that respect. But more than that, she doesn't hold any relevance in my life. I don't have any feelings for her, good or bad."

Earlier today, both Kangana and her sister Rangoli Chandel took to Instagram stories and criticised Taapsee for her comments. Kangana posted two stories and expressed her annoyance. She wrote, "She calls producers and begs kangana ji ne kuch chhoda hai toh mujhe de do please, aur aaj iski aukat dekho (She calls producers and begs them to give her films that I have rejected, and look at her today)... (sic)." 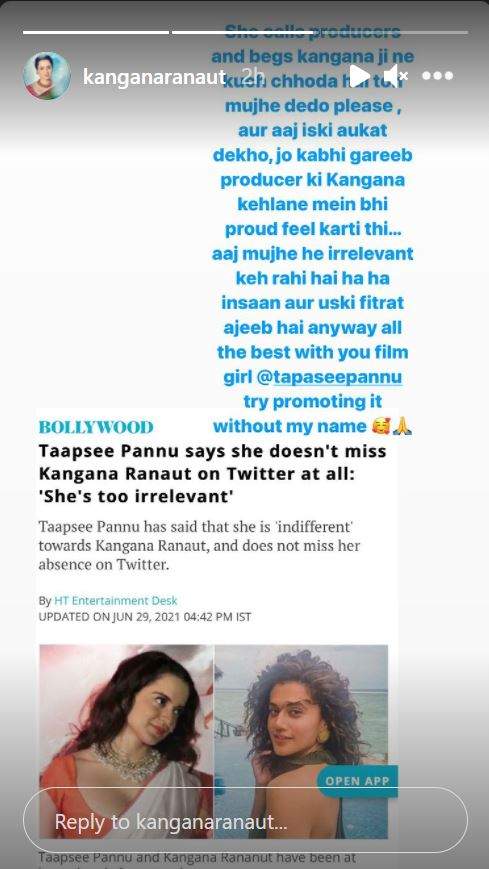 In another story she wrote, "I don’t mind B grade actors using my name or style or interviews or general career strategies to promote themselves or their careers ....Of course they will use my name growing up in the industry I was also inspired by those who made it before me but I never disrespected them always showed immense respect for those who inspired me like Vaijantimala ji,Waheeda ji and Sridevi ji. Magar doosre ke sar pe paon rakh kar upar chadhne ki koshish karne wale ko uski aukat dikhana zaroori hai (But those who step on someone's toes need to be shown their place) Good morning to all (sic)." Also read: 'You will forever be sasti': Kangana Ranaut attacks Taapsee Pannu after IT raid

Kangana's sister Rangoli posted a story on her Instagram account. She wrote, "Dear sasti copy and gareeb B grade producers ki Kangana Ranaut ... please see everything that you spoke about no one is interested in your film that you are promoting or relationship that you explained in depth and gave details in this interview, everything is about Kangana ha ha ha your relevance is only because you use her name, some day try surviving without using her name if you can’t then bow down to the Queen. @taapsee (sic)." Kangana and Rangoli's Twitter accounts were suspended after they violated the platform's rules. Both of them have often taken digs at Taapsee Pannu in public, and have called her Kangana's 'sasti (cheap) copy'.

Also read: Taapsee Pannu and Kangana Ranaut call a truce? Both actresses appreciate each other for their performances