Actors Taapsee Pannu and Sona Mohapatra reacted strongly to the Supreme Court’s verdict on a rape case, where the bench had asked a rape accused if he was “willing to marry” the victim.

The Supreme Court on Monday asked a 23-year-old man, who has been accused of raping a minor girl, whether he would marry the victim. The bench had asked, “Are you willing to marry her? If you are willing to marry her then we can consider it, otherwise you will go to jail.”

“We are not forcing you to marry,” the bench added.

Taking to Twitter to respond to this news, Taapsee Pannu wrote, “Did someone ask the girl this question ? If she wants to marry her rapist !!!??? Is that a question !!!??? This is the solution or a punishment ? Plain simple DISGUST!”

Meanwhile, Sona Mohapatra said a rapist marrying his victim had been a “gory and repulsive Bollywood solution” in the past, but could not fathom how a “Supreme Court in India could fall to this level” in these times.

“This is sickening & deeply disturbing. A rapist marrying his victim has been a gory & repulsive bollywood solution in the past, how can a Supreme Court of #India fall to these levels?

Fashion photographer Atul Kasbekar, too, reacted to the news on Twitter: “I honestly cannot fathom this warped form of ‘justice’. Whatsoever Who can possibly have any logic as to how this can be any sort of solution?” he wrote. 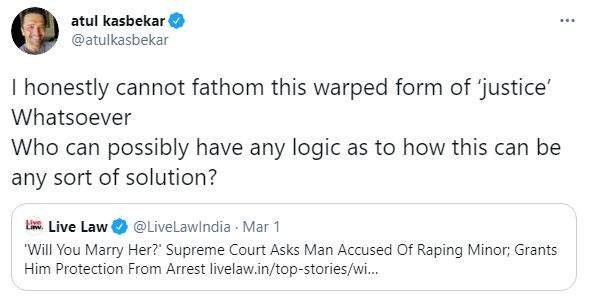 The accused person in this rape case is working as a technician in the Maharashtra Electricity Production Company Ltd. The man had allegedly raped the girl repeatedly ever since she was in ninth standard and had threatened her not to speak up about it.

After the matter came to the knowledge of the girl’s mother, the two of them had reportedly gone to the police station to file a complaint. Seeing this, the accused’s mother had requested them not to do so and had said she was ready to make the girl her daughter-in-law.

However, when the girl turned 18 in June 2018, the accused’s mother refused the marriage, after which a complaint was lodged.

Following this, the Bombay High Court had cancelled the anticipatory bail granted to the accused in this case. The accused then filed a petition with the Supreme Court.

After the top court learned that the man was already married, the bench asked him to seek regular bail at the concerned court. The apex court later granted the accused protection from arrest for four weeks.