Priyanka Chopra Jonas, who has acted in The White Tiger alongside Rajkummar Rao and Adarsh Gourav, expressed joy over Adarsh being nominated for the BAFTA award under the Best Leading Actor category. 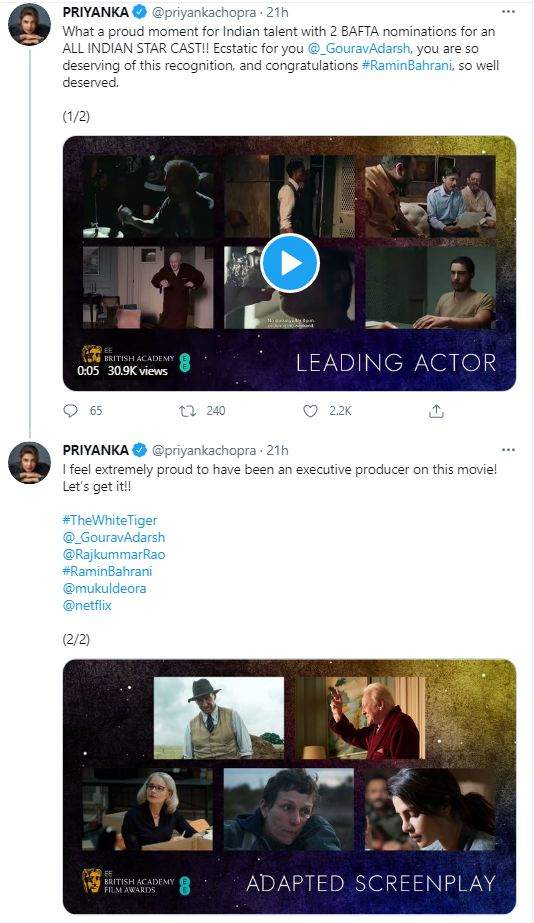 In another tweet, she added, “I feel extremely proud to have been an executive producer on this movie! Let’s get it!”

Also read: Adarsh Gourav pulls back the curtain on his transition to Balram Halwai in The White Tiger

Meanwhile, Adarsh Gourav was shocked over him being nominated for the BAFTA awards. He wrote on Instagram, “Holy shit, it’s really happening! Thank you Ramin for trusting me to play the character that has given me more than anything I’ve ever experienced,” he wrote on Instagram and added, “Congratulations to the team for two BAFTA nominations! Best adapted screenplay and Leading actor. Congratulations to all the other nominees too!”

The news had been completely unexpected for the actor, who said he had been at the gym on Tuesday evening and had not kept an eye out for the announcement. He said during an interview shortly after the nominations were announced, “This is unbelievable. It is surreal... I was at the gym. I just found out about the nomination.”

He added, “I saw my phone and there were a lot of messages on The White Tiger WhatsApp group and Pooja Gupte, the DOP called me. This is so unexpected and overwhelming.”

The White Tiger features Balram, a poor auto driver who rebels and rises to power and fame after a rich couple gets him involved in an accident. Priyanka Chopra and Rajkummar Rao play the roles of the rich married couple who return to India from the US for their business, and Priyanka’s character is the one behind the wheel during the life-changing accident.