Bollywood diva Alia Bhatt is all set to star opposite superstar Salman Khan for the first time in Sanjay Leela Bhansali's upcoming movie titled, Inshallah. The Padmaavat director made the announcement earlier on Tuesday and the actors also took to their social media handles to share the news.

Welcoming Alia on board, Salman wrote, “It’s been 20 years but I am glad Sanjay and I are finally back in his next film, Inshallah. Looking forward to work with Alia and inshallah we will all be blessed on this journey.”

Meanwhile, Alia wrote: “Dream with your eyes wide open they say & I did. Sanjay Sir and Salman Khan are magical together & I can’t wait to join them on this beautiful journey called Inshallah.” She also tweeted, “I was 9 when I first walked into Sanjay Leela Bhansali’s office, all nervous and hoping and praying that I would be in his next film. It’s been a long wait.”

However, Twitter responded to the news with mixed reactions. While some couldn't handle their excitement at the news of this amazing collaboration, many were not pleased with the 30-year age gap between the two lead actors in this love story. Some dug up throwback pictures of a young Salman Khan with baby Alia Bhatt, highlighting the age difference between the two actors.

A fan shared the picture and captioned it, “Who would’ve thought they will work together as a lead pair. #Inshallah.” 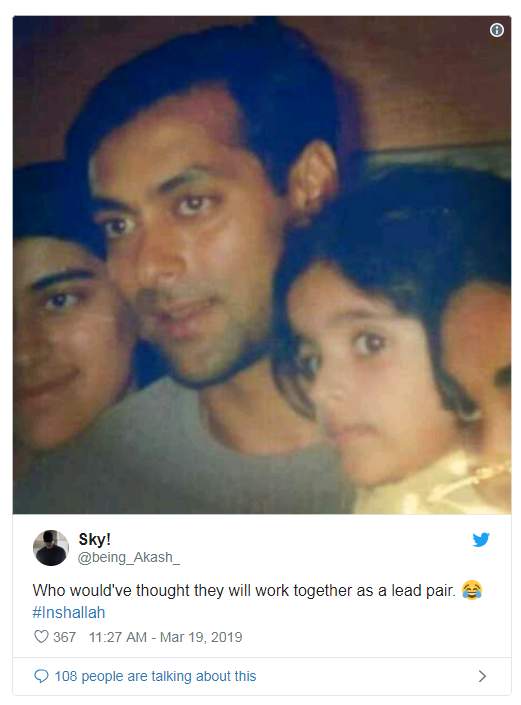