Priyanka Chopra Jonas has been participating in numerous television shows to promote her latest movie, The White Tiger and other upcoming releases.

She recently took part in The Ellen DeGeneres Show online from London, where she played the game 'Truth and Drink' and answered a set of questions about her husband Nick Jonas, other celebrities, and her activities during the lockdown.

When Ellen asked Priyanka about the two of them spending a lot of time together during the lockdown and what they got to know about each other, the actor replied, "My husband is a lot neater than I am. Because I don’t want to be the messy one in the house, I have started keeping my shoes back, making the bed in the morning."

Priyanka also revealed that Nick loved to eat on the dining table, as opposed to the couch, which she preferred. She said, "He can’t eat on the couch which I love doing. I have learnt that at times we have to pivot towards each other. He prefers a dining table for dinner. He is very formal that way. He is super fancy." 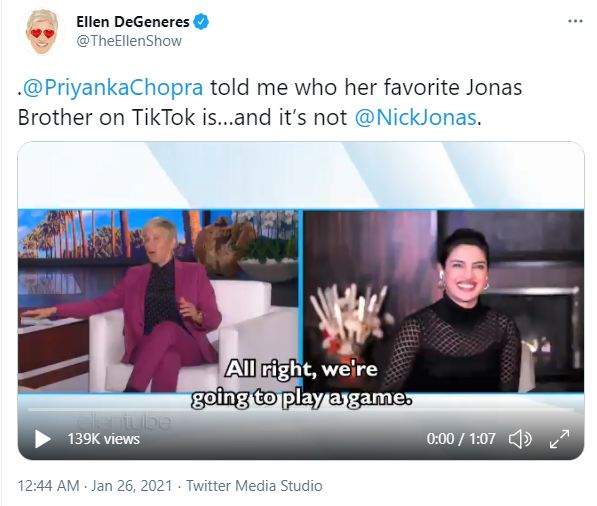 Ellen also asked the actor about the last celebrity she had spoken to, and about what, to which she said, "It was Lily Singh, actually. I just did her show, so she was thanking me for that, and how much fun we had."

She added that she heard Lily Singh was going to appear for The Ellen DeGeneres Show the following week.

Then came the interesting part of the show, where Ellen asked Priyanka to do her best Celine Dion impression. Priyanka said, "Ok, this will be embarrassing," but went on to sing Celine Dion’s It's All Coming Back To Me Now.

The game later moved on to Priyanka’s activities during the lockdown. She spoke about how she had begun learning how to play the piano but gave up after two days. "I did for a good two days, and then I was like I can’t. I wasn’t coordinated to do it. It was too hard."

Ellen also learned that it was Nick who had tried to teach her. "He was the one who was trying to teach me and then gave up as I gave up," Priyanka said.