Priyanka Chopra Jonas, who recently starred in The White Tiger that earned an Oscar nomination, gave a witty response to a journalist from Australia who had wondered out loud whether the couple was “qualified enough” to announce the nominations for the 93d Academy Awards.

She took to Twitter and shared a long list of her widely-acclaimed film credits, which included more than 60 movies. She also wrote, “Would love your thoughts on what qualifies someone. Here are my 60+ film credentials for your adept consideration.” 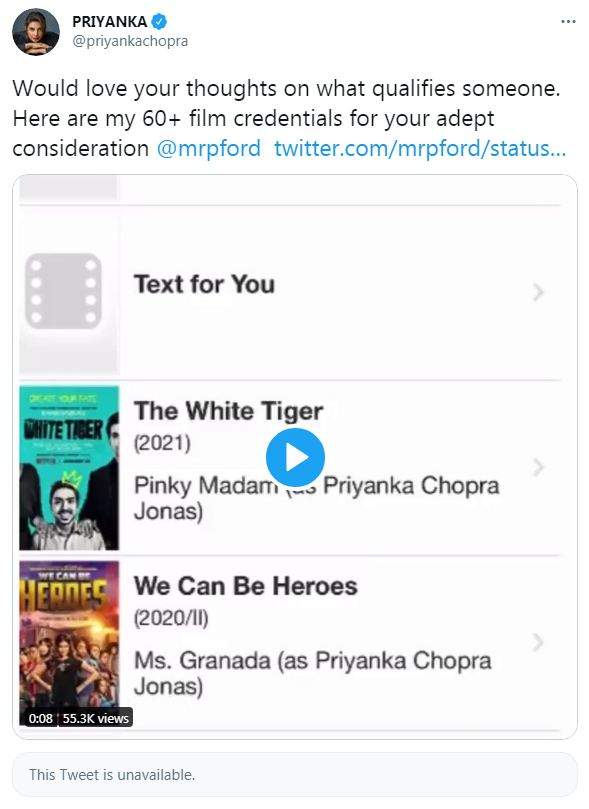 He had earlier said on Twitter, “No disrespect to these two but I’m not sure their contribution to the movies qualifies them to be announcing Oscar nominees.”

However, following the massive backlash he received from netizens for insulting the actor and singer, Peter made his account private.

The responses on social media towards Peter’s tweet varied from hitting out at him to asking the journalist to watch movies like Barfi!, Bajirao Mastani, the Krish series, Agneepath, Dil Dhadakne Do, and The Sky Is Pink, before dissing the actress.

Meanwhile, her upcoming projects include Text For You, The Matrix, and Citadel, to name a few. Priyanka has been an actor in the film industry for over 17 years.

She also happens to be a UNICEF Goodwill Ambassador, is an investor in dating app Bumble, and recently released her memoir ‘Unfinished’.