The trailer for the highly-anticipated movie Drishyam 2, a sequel to Drishyam, starring Mohanlal and Meena, will be released on February 8, Mohanlal announced on Friday.

Fans were expecting the date of release of the movie when the trailer was dropped. The movie will be released directly on OTT platform Amazon Prime Video. 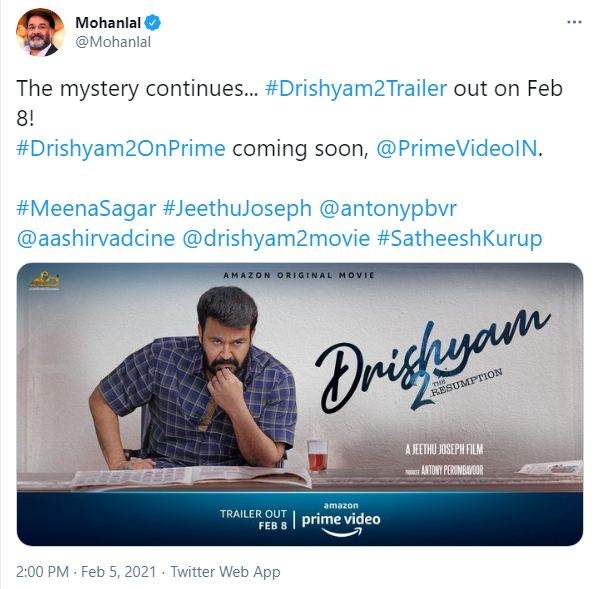 The actor made the announcement via Twitter, where he also attached a poster for the trailer. He wrote, “The mystery continues... #Drishyam2Trailer out on Feb 8! #Drishyam2OnPrime coming soon, @PrimeVideoIN.”

The second part of the movie, which is directed by Jeethu Joseph, will pick up from where Drishyam 1 left off and answer certain questions left unanswered in the first part.

The cast also includes Ansiba and Esther Anil, who will be playing the role of their daughters, as they did in the prequel. The film cast will also have Asha Sharath, Siddique, Murali Gopy, and Saikumar playing crucial roles.

Drishyam, a highly successful film that was released in 2015, is the first Malayalam movie to hit ₹50 crore at the box office.

The first part was about a father who helps cover up a murder accidentally committed by his family.

The movie was also remade in Tamil and released in 2015, starring actors Kamal Haasan and Gautami. The Tamil version grossed over ₹100 crore at the box office.