One More Thing. It was a line used to great effect by former Apple CEO Steve Jobs to cap off Apple’s launch events with a surprise announcement, and the Cupertino-based company invoked “One More Thing” for its last big hardware event of 2020 to launch a lineup of their Mac computers refreshed with Apple’s own chips. For those unaware, this move signals a departure away from exclusively relying on Intel CPUs in their Mac laptop and desktop range, opting to own the full stack by owning the silicon end of things as they do on iPhones and iPads. At last night’s event, Apple detailed what the transition from Intel to its own processors will look like, and when you’ll be able to get your hands on a computer with the all-new Apple chip for Macs. Here are the highlights of what was announced, and why it matters. 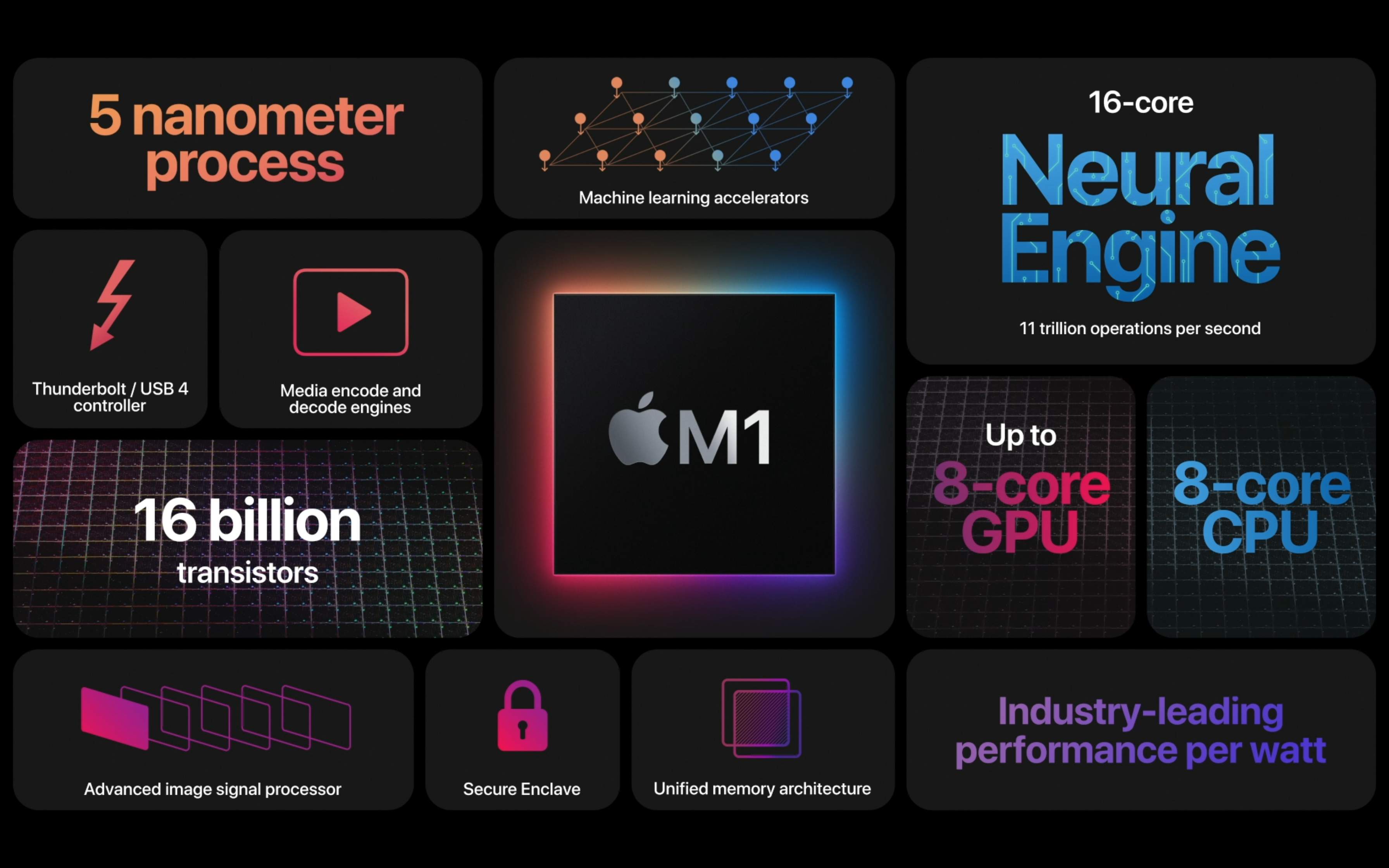 Apple M1: Apple’s big reveal was the M1 chip, it’s the first chip for Mac. With a focus on performance and efficiency that Apple claims is yet unseen in personal (laptop) computing, the M1 chip is designed on the 5-nanometer process with 16 billion transistors, a 16-core Neural engine for machine learning capabilities and support for the latest Thunderbolt 4 standard. In pure processing terms, the octa-core M1 has four high-performance cores for grunt work and four high-efficiency cores (using a tenth of energy, for lightweight tasks). Couple that with the 8-core integrated GPU which uses a fraction of the power of comparable integrated graphics, and you have a potent yet efficient performer for the updated hardware announced at the event. Apple’s come out with all guns blazing with the M1, claiming it has the fastest CPU cores of any processor ever made and the best performance per watt of any CPU in its class on the market. While I’m yet to test the hardware, I’m not surprised one bit, with Apple’s lead in silicon engineering on the A series chips. It’s also set the ball rolling for the eventual transition of all of its computers to the new architecture, so one should clearly expect the ‘true performance’ chips to come next year…maybe an M1 Pro for the 16-inch MacBook Pro? 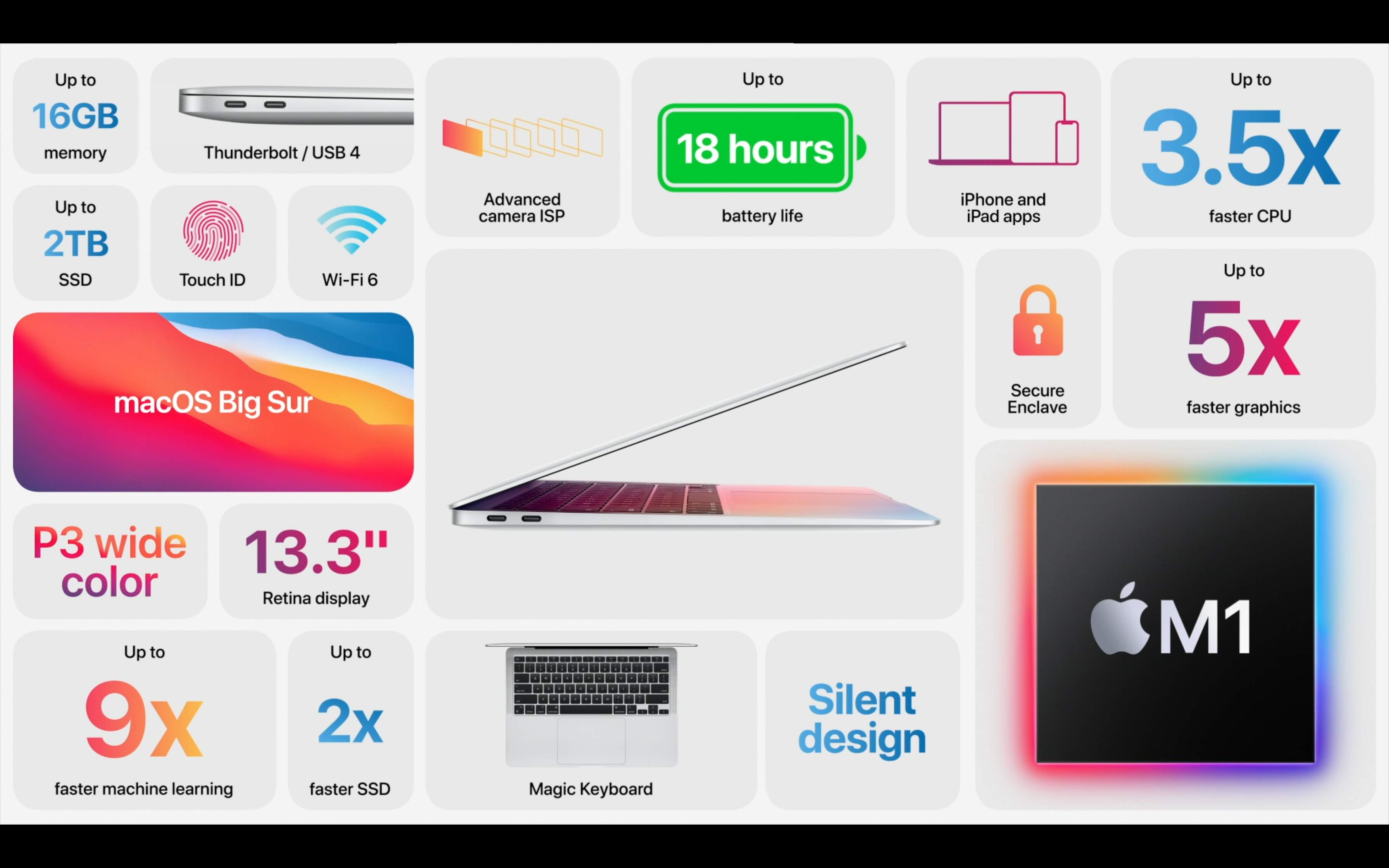 MacBook Air with M1: The svelte MacBook Air, with its thin and light design, was an obvious choice for the M1 chip to make its debut. Apple claims the new Air is significantly faster than the previous Air, with 3.5x CPU and 5x graphics performance particularly on intensive apps like Lightroom…without compromising the jaw-dropping 18-hour (video playback) battery life. The design forgoes a cooling fan, which separates it from the near-identical specs on the new 13-inch MacBook Pro. That fan may well be the crucial, allowing the MacBook Pro to offer sustained peak performance over longer periods, while the Air may have to throttle down quickly to lower performance levels to avoid overheating. The rest looks to be unchanged from the version I reviewed earlier this year (which has, as of the M1 Air launch, been discontinued), with the exception of an improved web camera. Available to order today for Rs. 92,900 (256GB, 8GB) from apple.com. 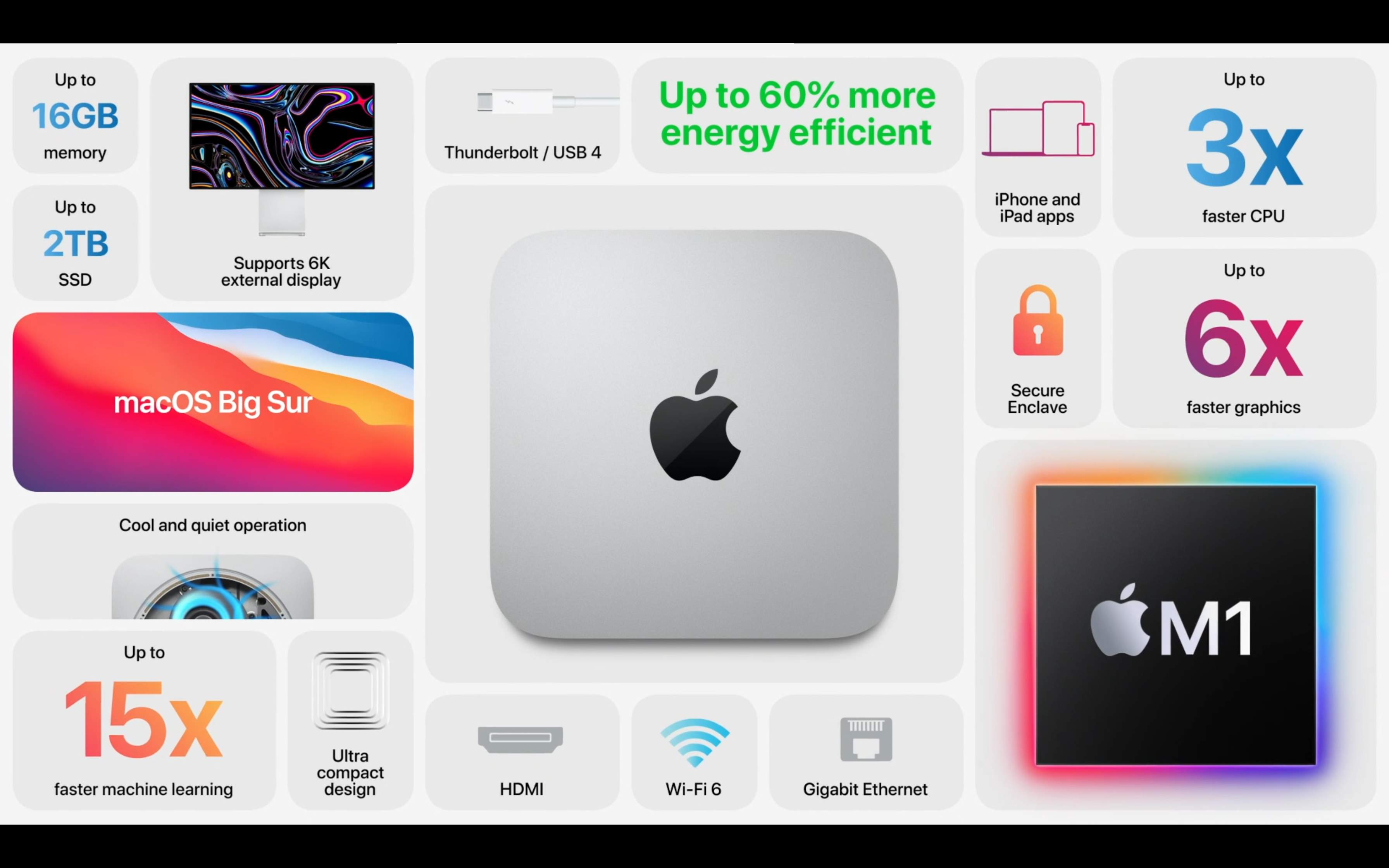 Mac Mini with M1: The surprise announcement was an updated Mac Mini, which many observers had expected to be obsoleted with the transition away from Intel. The M1 toting Mini starts at Rs. 64,900 for the 256GB SSD variant with 8GB of memory, and inside the rounded-edged square chassis that we’re familiar with is a machine that sees big gains in processing and multitasking, with up to a 6x increase in graphics performance and 3x on processing from the 2018 iteration. Connectivity options abound, with two Thunderbolt/USB 4 ports, one HDMI connection, and two old-style USB-A ports. 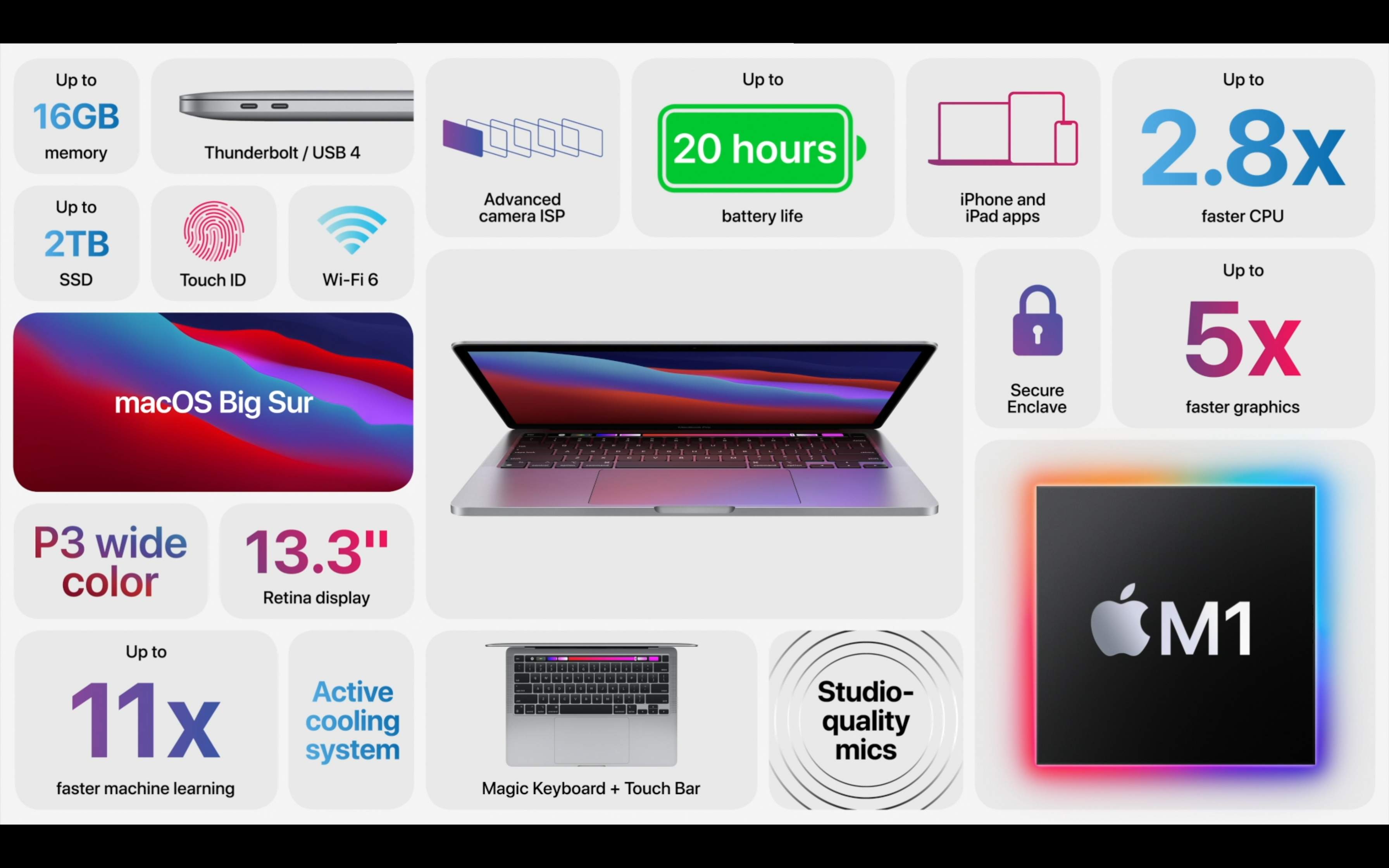 MacBook Pro 13 with M1: Mobile professionals, the kind that the MacBook Pro targeted, aren’t left out in the cold either, and a new 13-inch MacBook Pro powered by an M1 processor (and with a Touch Bar) launched at the event and goes on sale today as well. Gains in processing and graphics performance are on similar lines from the other M1 powered machines, but the 20-hour claimed (video playback) battery life is a biggest jump for a Mac yet. As with the MacBook Air, the M1’s camera image processor will boost image quality from the 720p camera during video calls, but the overall design will remain unchanged. As I mentioned earlier, the M1 update is only reserved for the more compact MacBook Pro, and the 16-inch MacBook Pro saw no update to the new chips at the event. In addition, you can still pick up an Intel-based 13-inch Pro, if your mission critical software requires native Intel chips. The 13-inch MacBook Pro with M1 is available to order today for Rs. 122,900 (256GB) from apple.com. 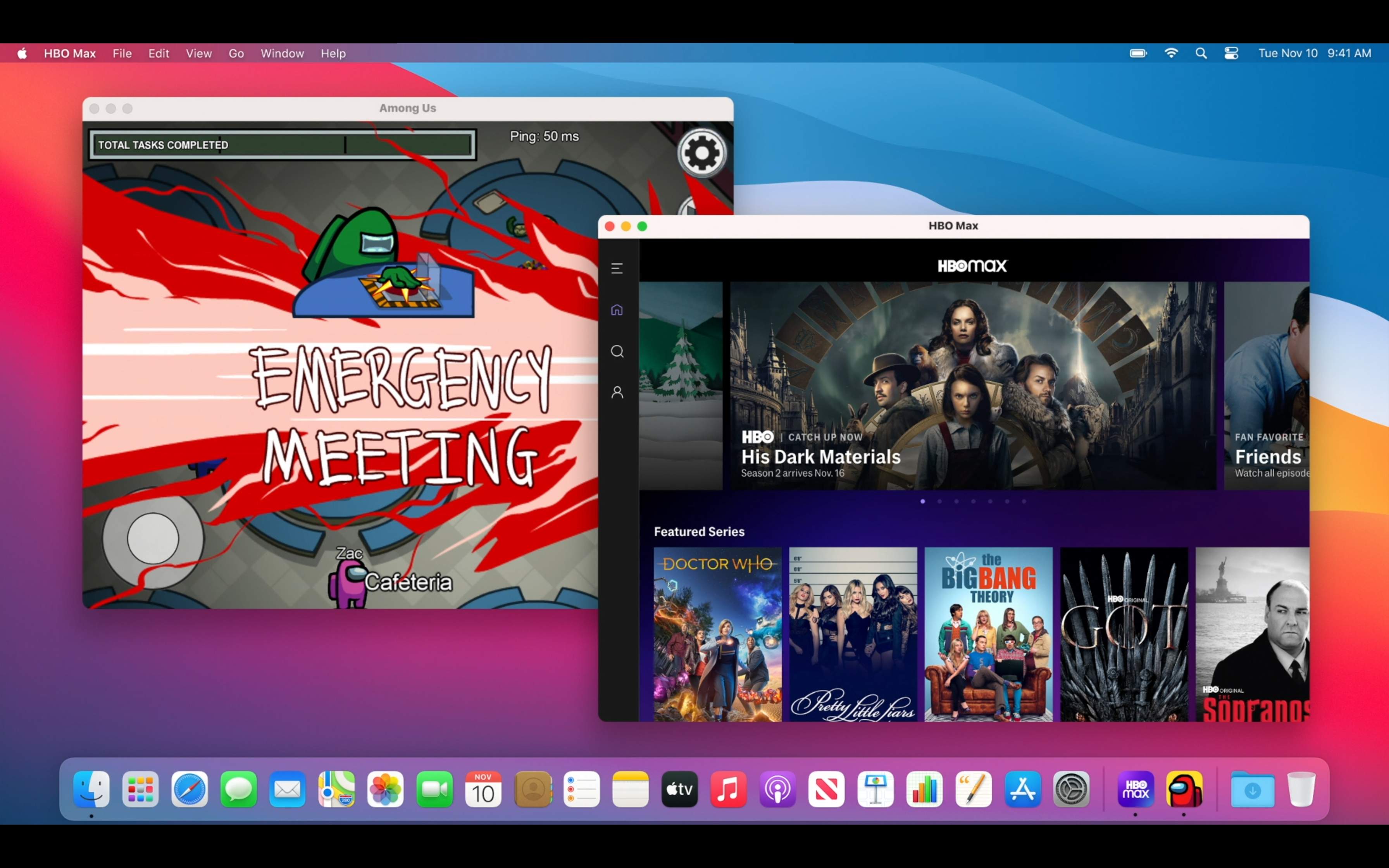 macOS 11 Big Sur: The next desktop OS for Macs is headed to your Mac this Thursday, only this time, it was designed with the new M1 chips in mind…which likely explains the delayed launch schedule after it was first shown on at WWDC earlier this year. At the launch, Apple flexed its silicon-software marriage by showing how responsive apps are on M1-powered Macs running Big Sur, but Big Sur will run on Intel-based Macs as well, so you don’t need a new Mac to get the benefits of the update. Aside from the visual overhaul, the big news with Big Sur is that since the M1 chip is based on the same architecture as the A-series chips that power iPhones and iPads, you’ll now be able to run iOS and iPad OS apps alongside Mac apps, and apps that are designed to run exclusively on Intel chips will be supported via the new Rosetta 2 emulation environment. Net net, it’ll all work for now…but as Mac developers have known for a while now, big changes are afoot. Closing thoughts
The new chip heralds a new era for the Mac – one only has to look at the iPhone and iPad to appreciate the benefits of owning the full stack. Crucially, the move away from Intel will let Apple not get held back by Intel’s release schedules, so one should see more frequent updates to the Mac lineup. That said, one couldn’t help but feel there was a missed opportunity in not updating the industrial design of the Air and the Pro, which would really deliver a sucker punch to the competition. Also, the space Apple saved by consolidating multiple components on to the M1 system-on-chip could have made room for bigger batteries – currently, the Air and the Pro ship with the same batteries as their Intel variants, and all the gains you see on battery life are courtesy the M1’s battery-sipping nature. Oh, and maybe an update to the 720p FaceTime camera? In a sense, as much as Apple flexed its silicon muscle with the M1, it held back on major design changes, and one hopes the 2021 Macs get the visual and internal refresh they have long deserved.