LG’s had what you could call a fall from grace in the smartphone segment, but the company has persevered with taking the sort of risks other big brands may not consider worth their while. Clearly, LG has decided to double down on “being different” from the rest of the rat race and making phones that stand out from the pack, with their own unique product designs and identities. The Velvet is one such phone. It takes the charm and appeal of a dual/foldable screen that’s quite the fancy of the tech world right now but implements it in a fashion which remains affordable… without sacrificing the genuine utility of a second screen. Is the phone worth it, though… or is it trying to solve a problem no one’s asking for? 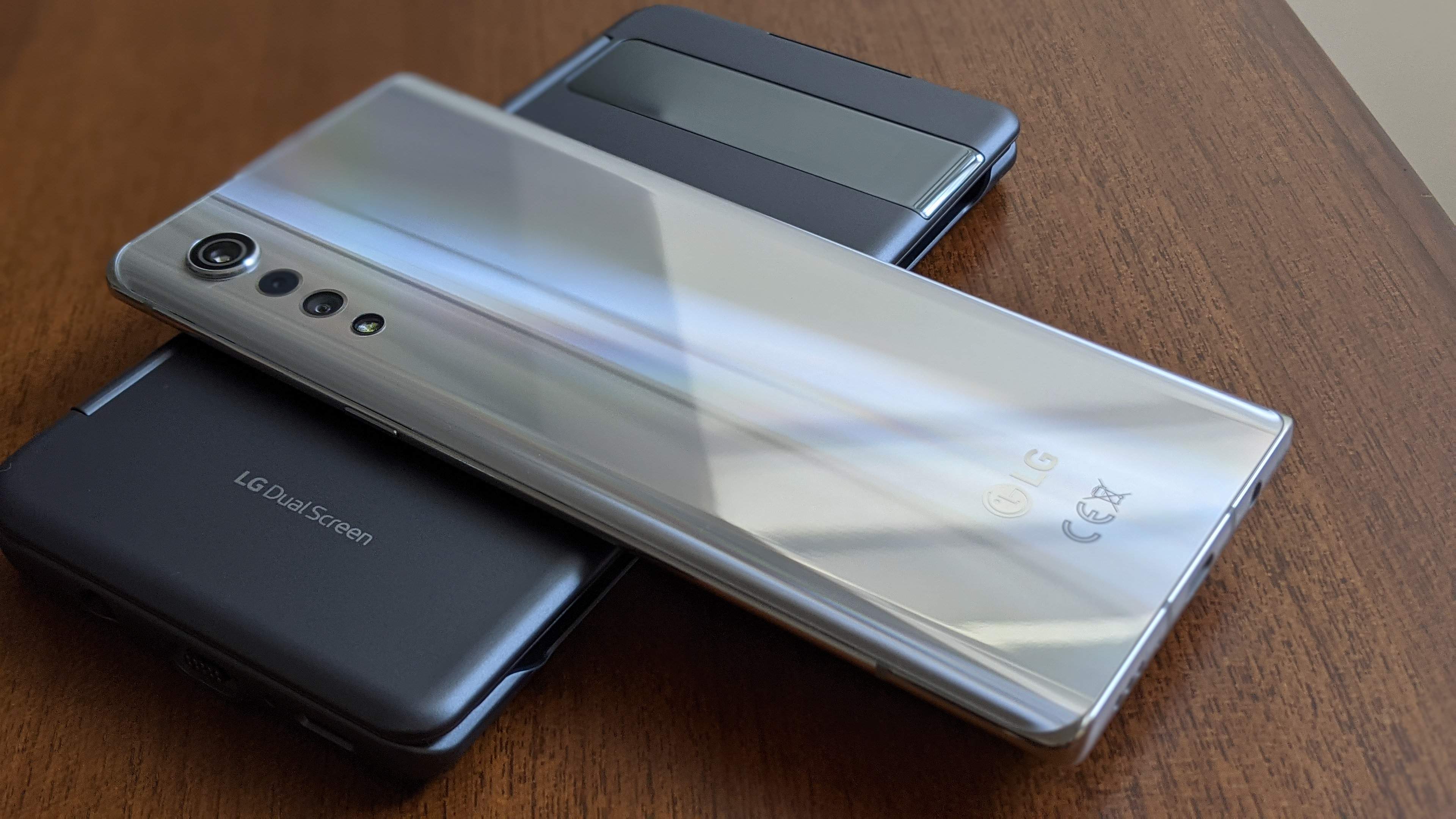 But before one dives deep into the Dual Screen case – and there’s a lot to say about how the second screen impacts (and oftentimes impedes!) usage – let’s take a moment to consider how slickly designed the LG Velvet is. From its tall form factor to the slim metal rails along its tapered edges, the Velvet is, true to its name, a smooth operator with a great in-hand feel. The rear is fairly bare, covered in colorfully reflective Gorilla Glass (hello, smudges!) with a triple camera array that sits flush to the panel and is inspired by droplets of water. This is a phone to flaunt, which makes the presence of the Dual Screen case a bit of dilemma – do you use the somewhat slippery phone sans case and enjoy the industrial design, or ensconce the Velvet in the bulky case for protection and the second screen? The good news is that the slim 7.9mm thickness hasn’t meant a compromise in battery capacity, and you still get a reasonably sized 4300mAh battery in the Velvet. A dedicated Google Assistant key, stereo speaker setup and a headphone jack round out the design, but it’s a pity that the Velvet drops the LG’s signature quad DAC seen on earlier flagships. 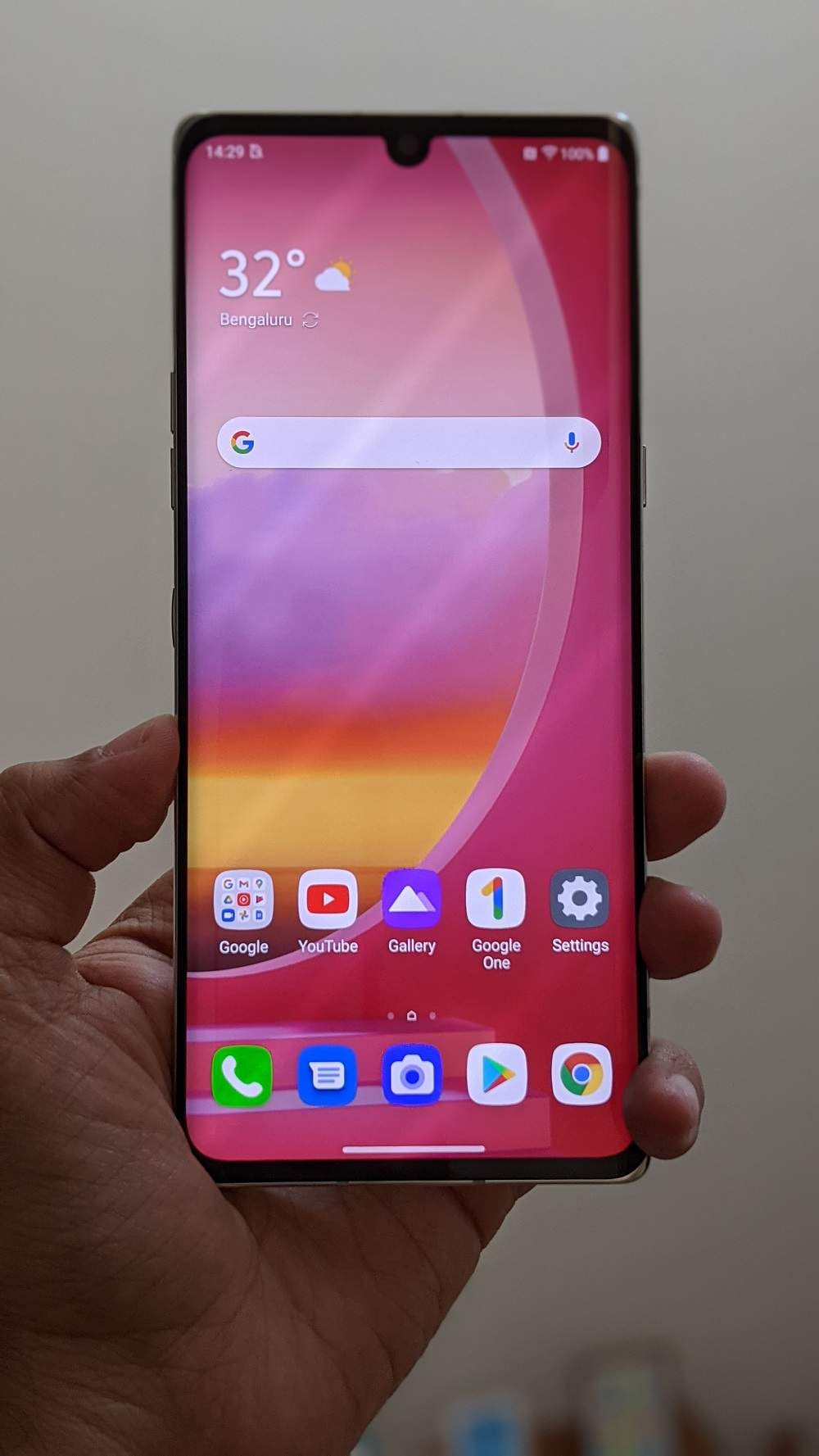 Around the front, you get a massive 6.8-inch full HD+ P-OLED display with a tall 20.5:9 aspect ratio, with distinctively more pronounced red levels and deeper blacks than other AMOLED phones in its price class. At the top is a teardrop style notch cutout, a bit of a dated design choice in my opinion. It’s still a 60Hz panel though, and options like the Mi 10T Pro are far ahead in the game on this front. Redemption comes via the curved edges to the display, which give the phone a sleek, modern aesthetic and further pronounce the thinness of the standalone Velvet phone.

Yet, this is not a phone that’s meant to be viewed standalone, and the Dual Screen accessory (sold separately) is key to the Velvet’s whole raison d'être. 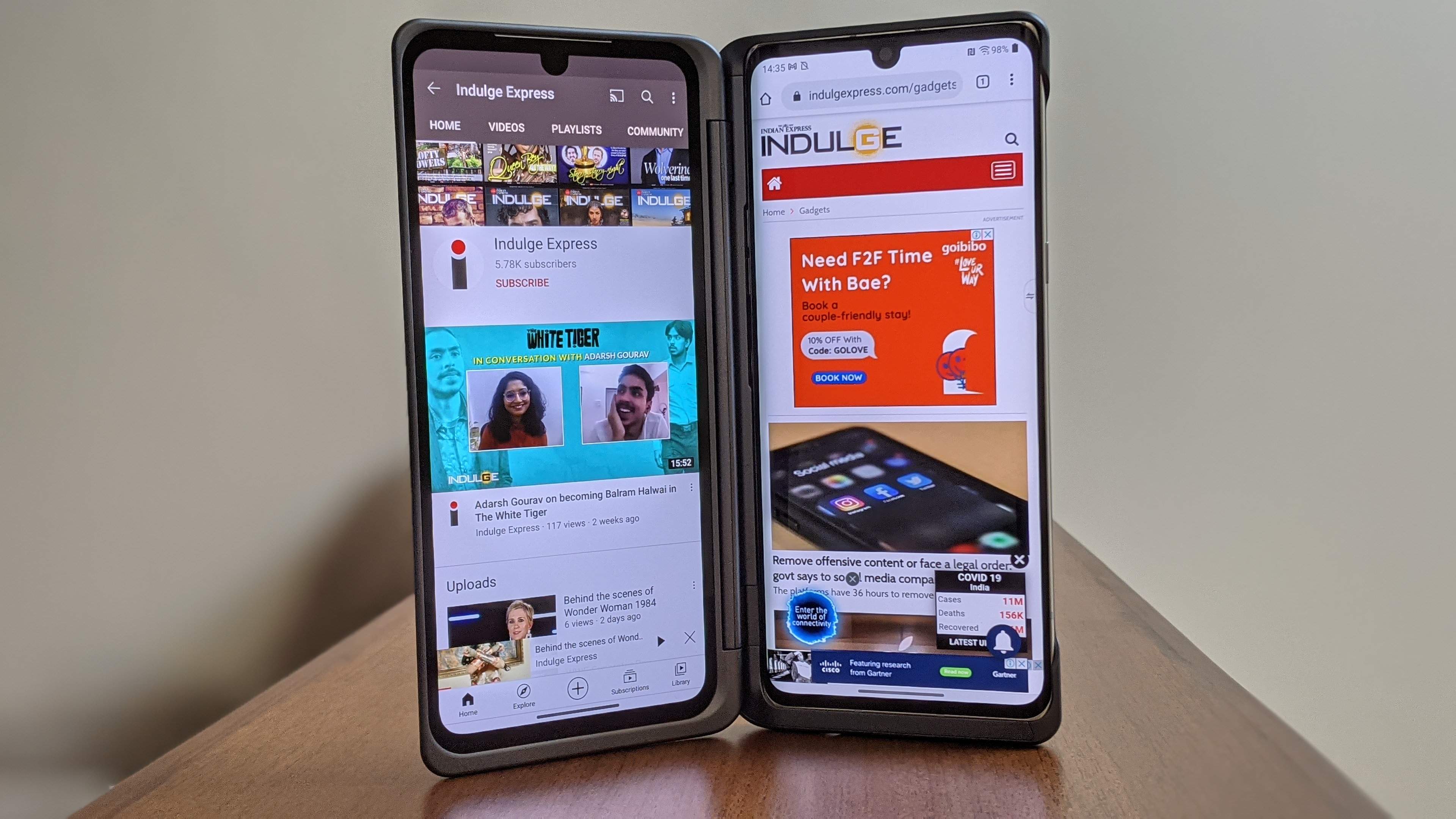 Put simply, the Dual Screen is a case that surrounds the Velvet in a plastic sheet and gives it a second display with the same size and resolution as its primary display. There’s even a small OLED panel on the outside which shows date/time, battery status and notification icons. The docking process is straightforward, with the phone snapping in and plugging into the case’s Type-C connector but taking the case off can be bothersome as you try not to drop the phone or snap the case in half. Docked in, the phone is solidly held in place and feels well protected with the tank like shell all around. 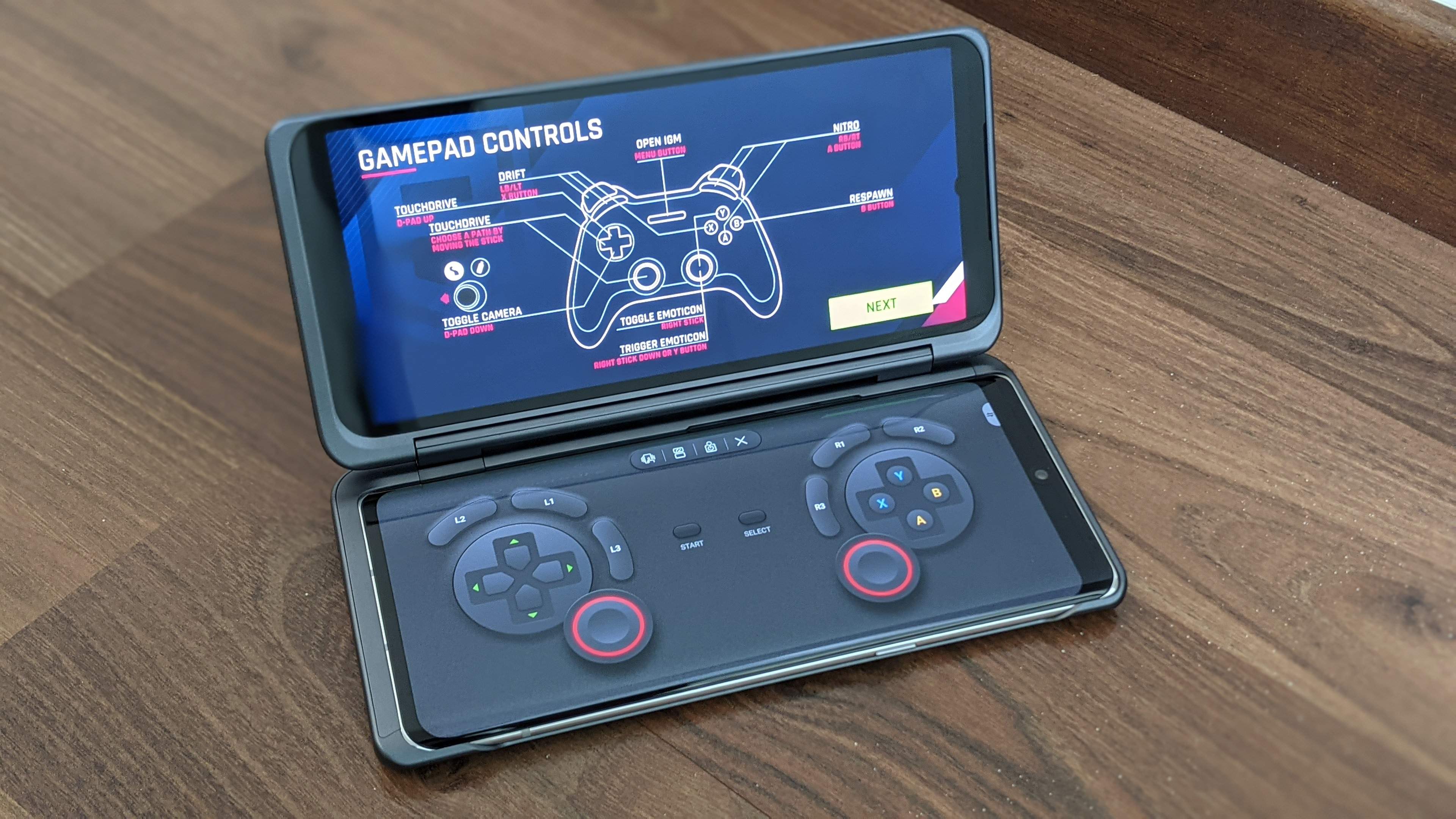 Of course, twice the number of screens means twice as much multitasking (or entertainment, you choose)! You can open two full screen apps simultaneously on the two screens, both screens have their own launcher and apps will launch on whichever screen you tap the icon. Sample this – you can have WhatsApp open on one display and be responding to your chats while watching a YouTube video on the other or use the camera on one and view the results on the other. You can quickly have apps swap screens or go into wide mode (supported apps like Maps, Youtube, Gmail etc) and span the entire width of both displays. If you game a bit, many titles let you have the game running on the secondary screen while positioning the controls on the main display. It’s surprisingly intuitive when you get the hang of juggling the two displays, and while it isn’t a true foldable like the Galaxy Z Fold 2, it does do well to deliver the benefits of dual-screen multitasking at a significantly lower price point and in a more durable form factor. As handy as the Velvet is without the case, there’s a lot to be said about how much bulk the case adds on, and the added work involved in opening up the case for literally getting anything done. If the undocking procedure was a little less cumbersome, it’d be fine, and you’d slap the case on when you needed and left it behind when you stepped out. But it isn’t, and the case ends up getting in the way of things very often. I’m not entirely comfortable with the wear and tear you’d be putting the phone (and its USB Type-C port) through to recommend this setup easily. Even when it’s open and in use, the bulk is noticeable, although you can rotate the case all the way back to get the second screen out of the way. Another quirk – with the phone in the case, you’ll need to carry around a small magnetic adapter which attaches to the bottom of the case to give you an easily accessible USB Type-C port for charging, but the size of the adapter makes it very prone to being lost. You’re going to have to think about these aspects and your use cases seriously if you want to pick the Velvet up with the Dual Screen case. 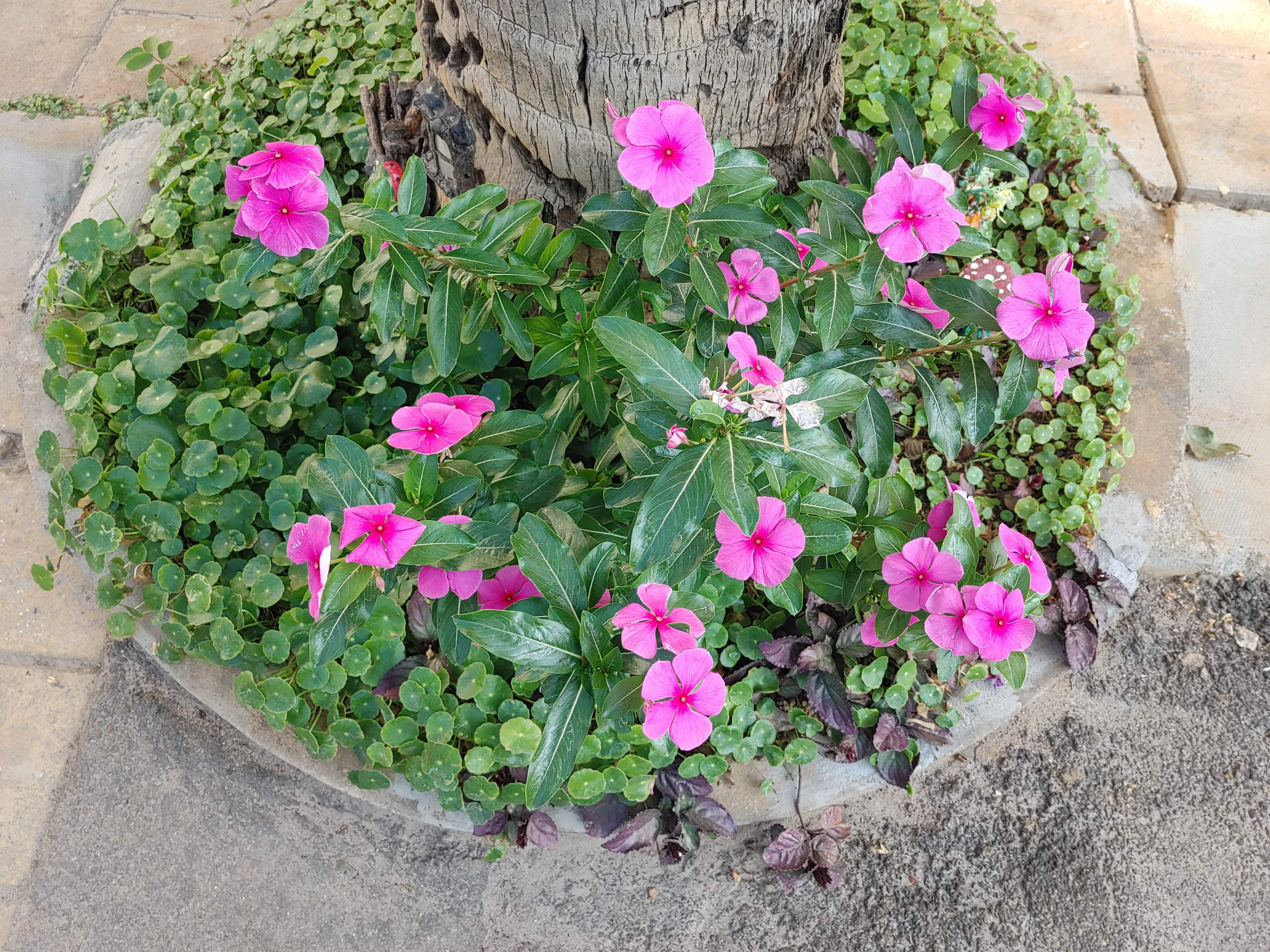 The rest of the phone almost plays second fiddle to the design and dual-screen hoopla. You get a Qualcomm Snapdragon 845 that was the toast of town back in 2018, along with 6GB of memory and 128GB of storage. Clearly, the difference in performance between the Velvet and its peers, many of whom sport Snapdragon 865 chips, will be noticeable, as will the occasional stutters when you move from one heavy app to another. The lower amount of memory also means less apps stay open in the background, and the phone starts throttling performance after about 30 minutes of heavy gameplay. Software wise, the LG Velvet comes with LG UX 10 based on Android 10, and not having made the move to Android 11 even in late Feb 2021 is worrisome. The triple camera setup fares well, as one has come to expect from LG, with good daylight performance and accurate colors and good dynamic range, and respectable night time shots to boot. 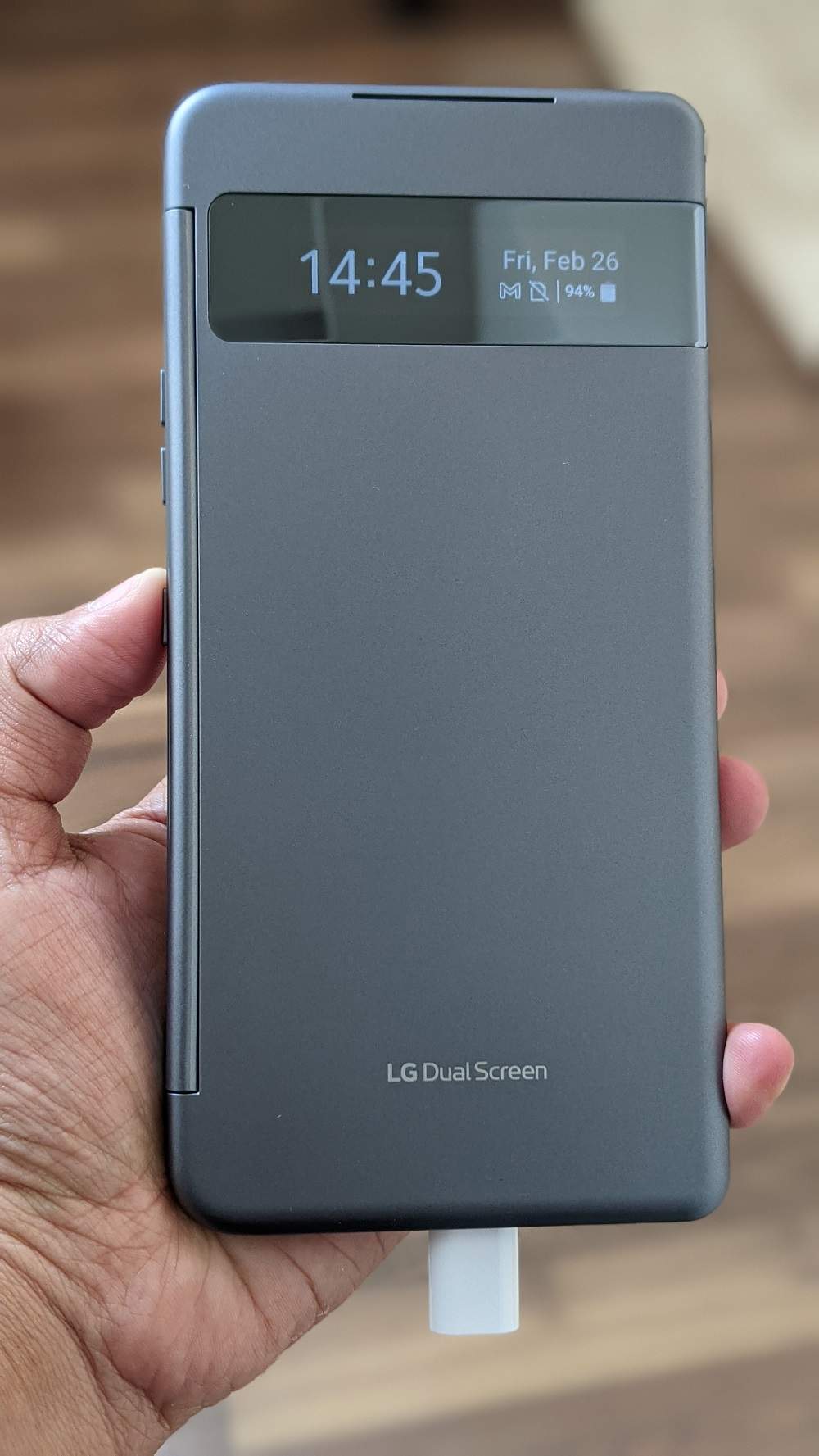 Who is the LG Velvet for, really? It’s not going to appeal to folks seeking the latest hardware or the smoothest Android experience, even as the phone itself is a sleek looker in its price class. None of those fancy bells and whistles like a high resfresh rate display, fast charging or zoom cameras either – this is a phone squarely targeted at a niche that wants the dual screen experience without breaking the bank.