With cinemas having become a distant memory for most, home entertainment brands are making a serious play for seriously well-heeled folks who are ready to pull out all the stops for the ultimate home cinema experience. The ViewSonic X100-4K+ arrives with all guns blazing – true 4K resolution, an LED light source and HDR capabilities to boot - but does the fancy feature list measure up in real-world use and justify its premium price point? Read on to find out… 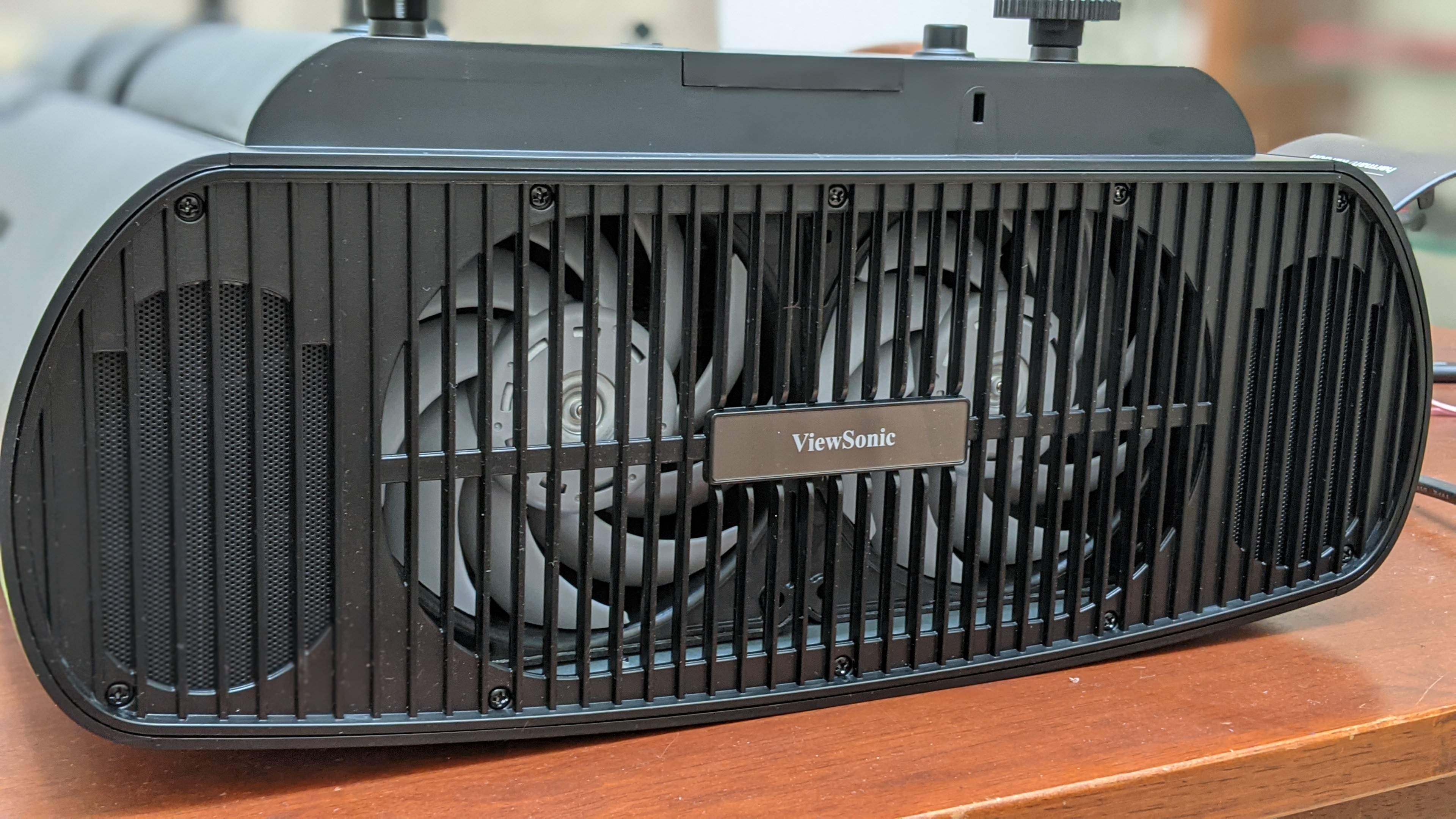 Now, while many home projectors aim for compactness, and others for portability, the X100-4K+ makes its big-screen intentions evident in the design itself. By any measure, this thing is huge, and it’s best suited to be mounted on the ceiling and out of the way. Even the design lends itself to ceiling mounting, with the lens controls on the top, the two 20W Harman Kardon speakers and a small compartment with basic controls for operation on the sides, and all the ports and connectivity on the upper side of the projector (when ceiling-mounted, so you can run the wiring into the ceiling conveniently). That said, in the absence of a permanent ceiling mount, projection from a tabletop works equally well. The all-black exterior skips any sort of design flourishes, and all the controls are under concealed flaps, so you don’t see them when you don’t need to.  This is clearly meant to disappear into a home theater setup, instead of standing out. The only element which catches your eye is the massive pair of low-noise fans that keep things cool without being intrusive (under 25db at full tilt). 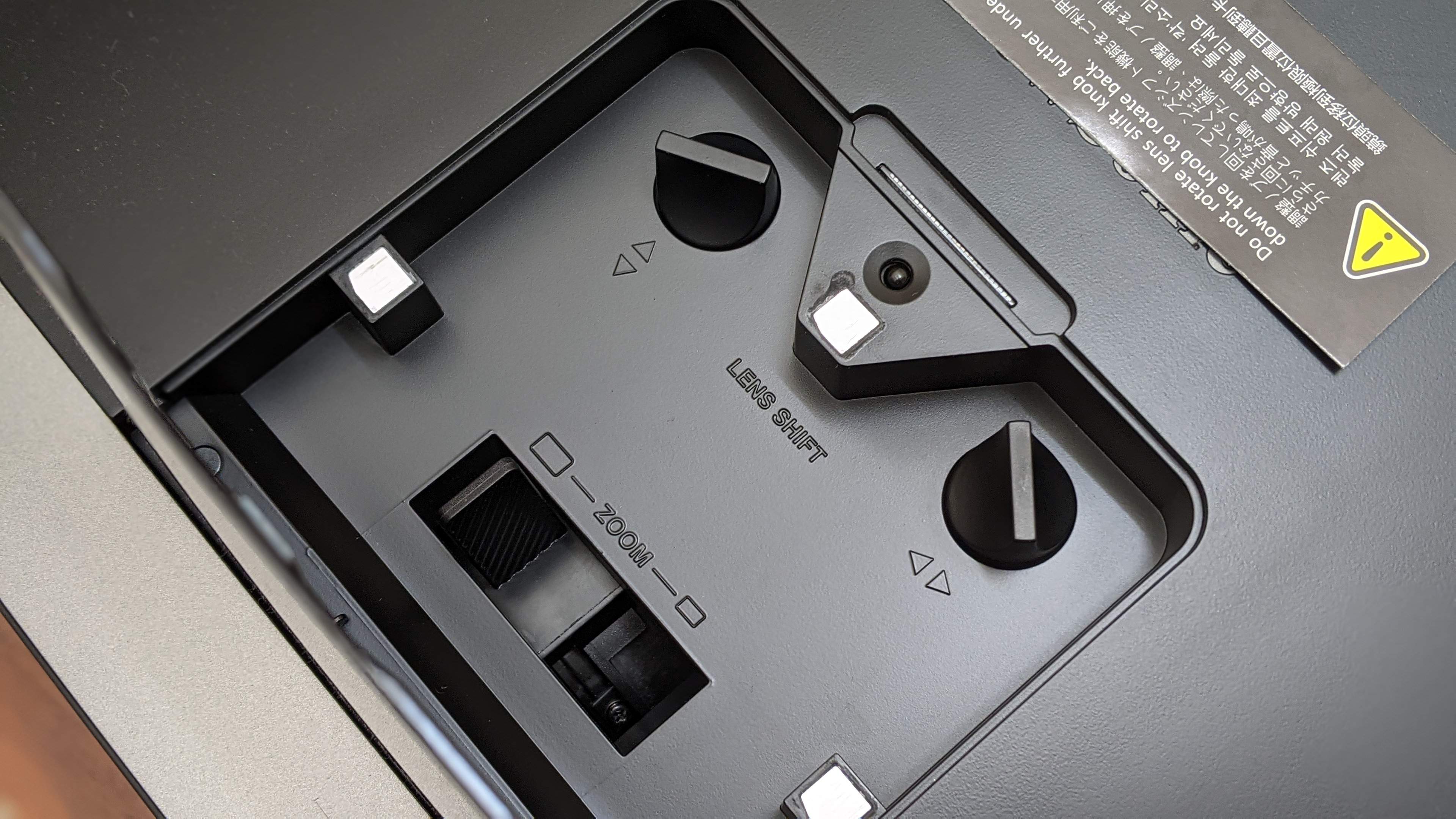 Speaking of ports, there’s no shortage of inputs on the X100-4K+, with HDMI 2.0 (HDCP2.2), VGA, S/PDIF Out, auxiliary, USB 3.0 plus wired and wireless network connectivity. You can perform basic operations via the onboard controls or use the remote control, which is well built but takes some getting used to. Two aspects you’ll love especially the projector is ceiling mounted – an automatic lens cover that slides into place when you’re not using the projector, and motorized focus control using just the remote control (no more fiddling around with the lens adjustment). 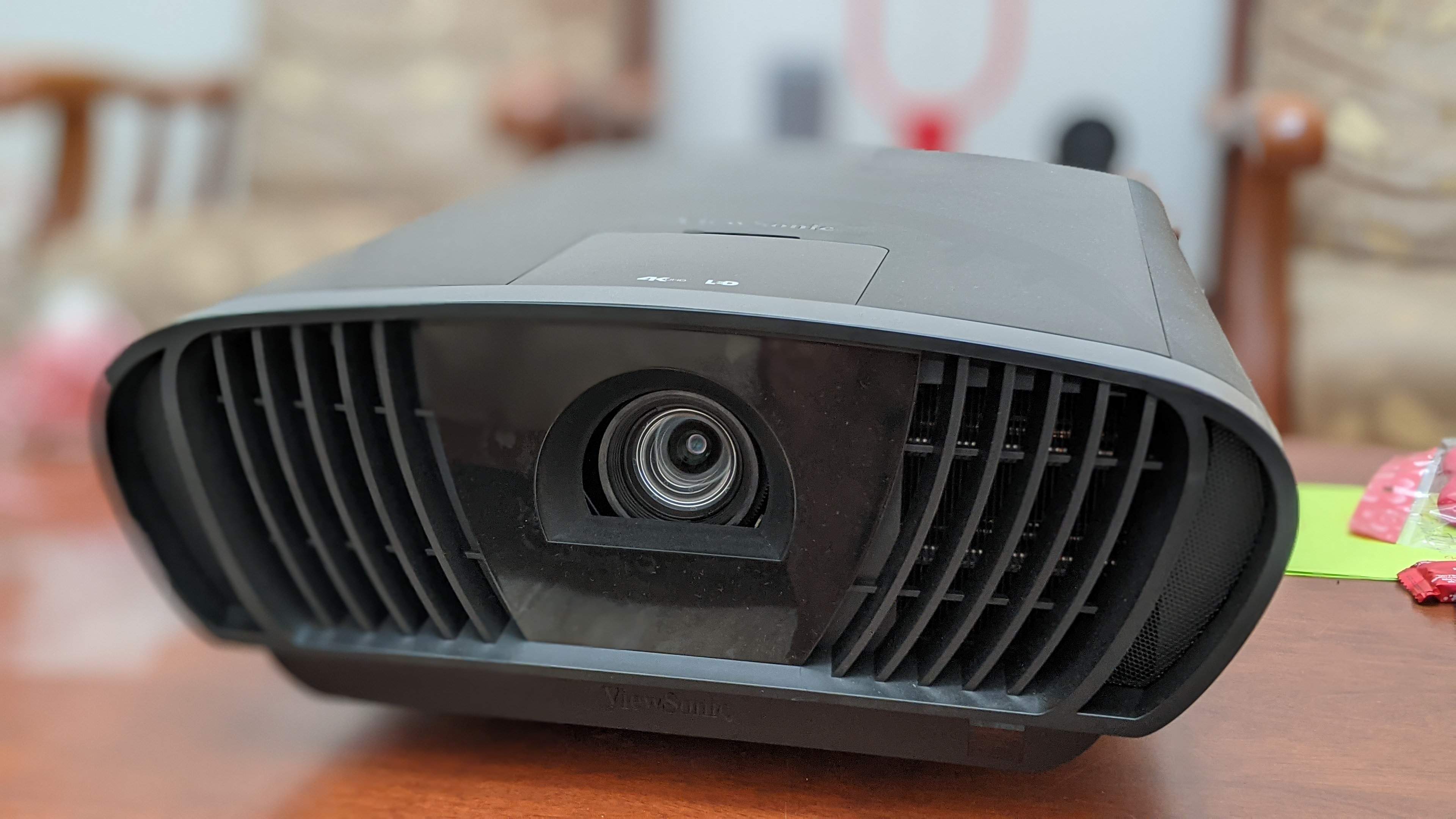 Once you’ve figured out where you’re placing the projector, setting it up was a breeze, particularly thanks to the generous amount of lens shift on offer. No matter where it is placed, the wide lens shift range of +/- 25% horizontal and +/-60% vertical allows you to adjust the location of the projected image without moving the projector or assorted furniture. Switching it on is a near-instant process, with the 2nd gen LED light pushing out 2900 LED lumens of brightness and a 4000000:1 contrast ratio which, translated into real-world use is bright enough for watching content with dim to low levels of ambient light, for up to 30,000 hours! Of course, as the name suggests, there’s support for 4K UHD resolution and HDR10 (and the next generation HLG standard via a future software update). 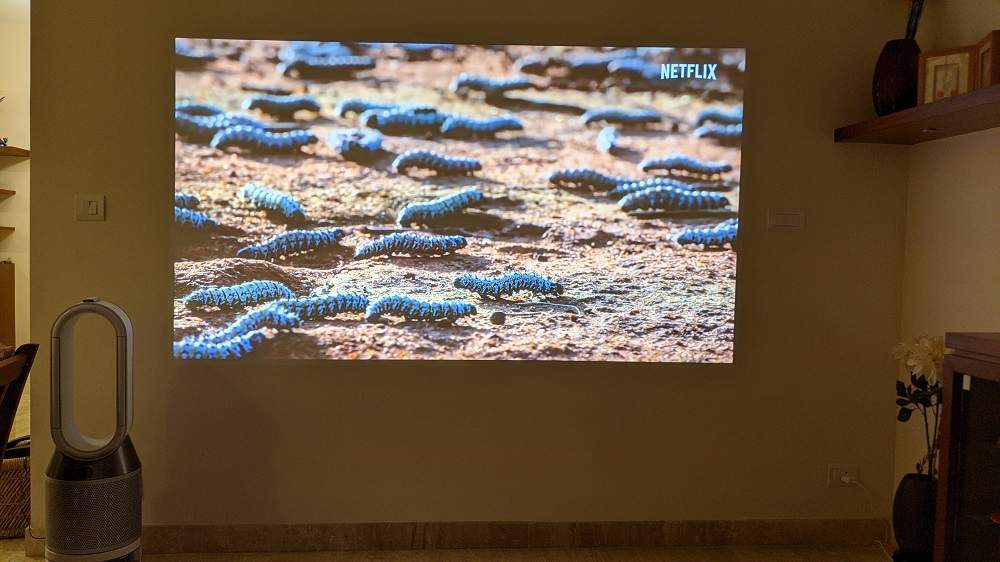 Getting a sizeable 120-140-inch image up and running is a cinch, and the image is tack sharp across the screen. For the most part, the impressive specs play out well on the screen, and watching HDR content on the expansive canvas is a joy for most…but if you’re a stickler for how your sports and movies should look, the colors take a bit of effort to tune. You could pick the Movie mode, which suffers on color accuracy but offers the best balance in how it handled both dark and bright scenes. 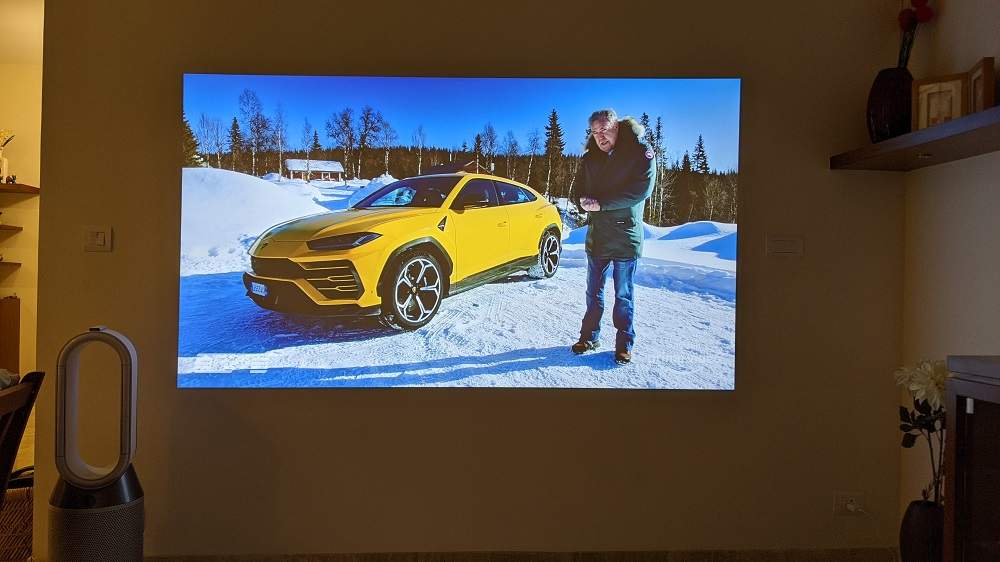 Any more, and you’re going to have to roll up your sleeves and dig into RGB levels, color temperature, gamma levels and the like to counter the slightly blown out, green-tinged parts of certain HDR scenes (SDR scenes are tightly reined in terms of colors and contrast), but your effort is duly rewarded with images replete with detail and sharpness, and an all-round immersive viewing experience. You’ll still going to be left slightly wanting in terms of absolute black levels, though. You can connect the projector to a soundbar over Bluetooth, but with the 20W Harman Kardon stereo speakers, there’s little need to – the sound is rich and easily fills up a mid-sized room. 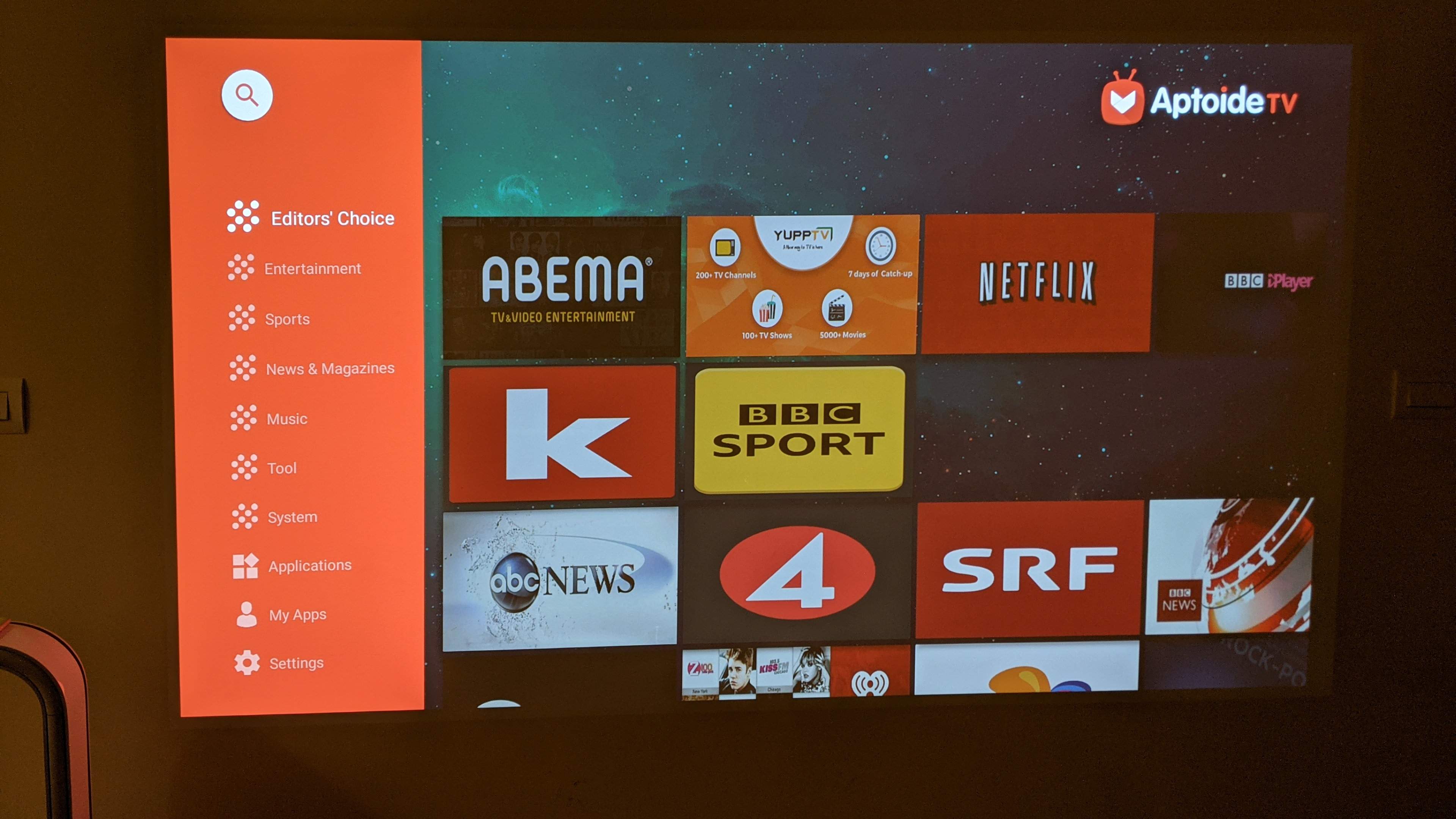 On other fronts, X100-4K+ ticks off a bunch of boxes when it comes to modern projector “smarts”, which includes Alexa / Google Assistant support (for changing sources, volume/power control), app support and the Aptoide app store. Yeah, about that last one – it’s rather forgettable, what with limited apps, clunky operation and a general lack of file format support. Just do yourself a favor and plug in your game console/Apple TV instead and you’re sorted. 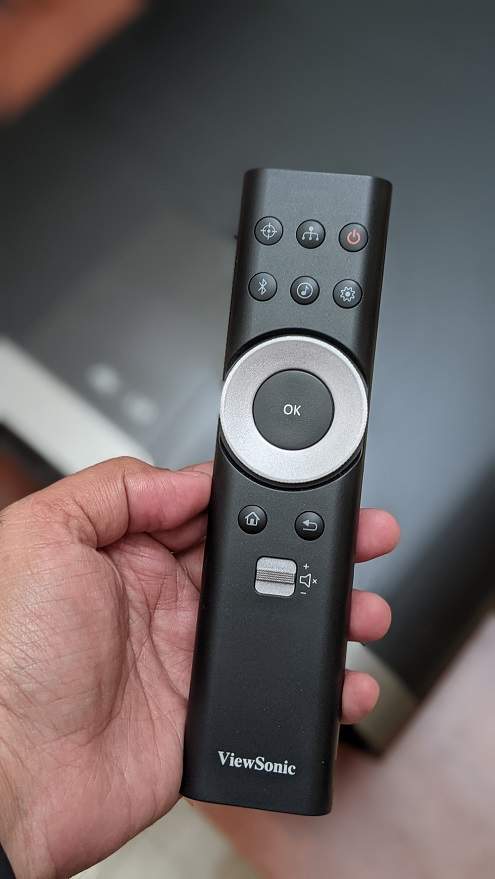 At a rated life of 30,000 hours from the RGBB LED light source, even heavy viewers are sorted for a good decade or more without the fear of expensive lamp replacements. While black levels may not be exceptional and some manual color finetuning may be needed, you’re getting a highly compelling video and audio experience from the X100-4K+. Remember, you’re paying in the region of a high-end OLED TV for the lens shift convenience and bigger viewing canvas, so choose wisely.