The country woke up to the shocking death of Bollywood icon Rishi Kapoor this morning, as he lost a two-year battle with leukemia. While names like Amitabh Bacchan, Salman Khan, Akshay Kumar, Ajay Devgn have been expressing their condolences on social media, even names from politics like PM Narendra Modi, Arvind Kejriwal, Rahul Gandhi, have grieved Kapoor’s death on Twitter. Mamata Banerjee, the Chief Minister of West Bengal mourned the passing of Kapoor on Twitter. 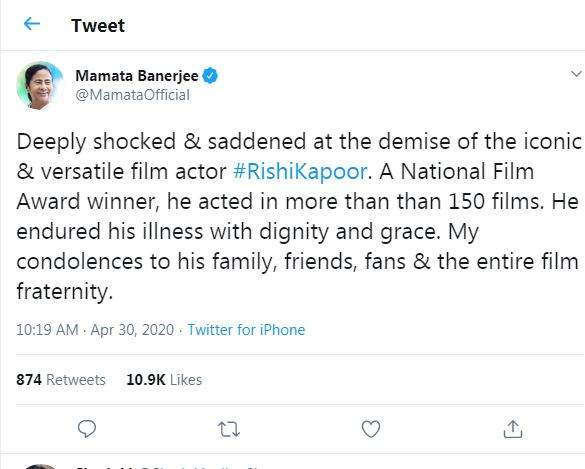 “Deeply shocked & saddened at the demise of the iconic & versatile film actor #RishiKapoor. A National Film Award winner, he acted in more than 150 films. He endured his illness with dignity and grace. My condolences to his family, friends, fans & the entire film fraternity,” Banerjee tweeted this morning.

Rishi Kapoor had been diagnosed with cancer in 2018, and lived in New York for almost a year for his treatment. He returned to India this year and had been hospitalised in New Delhi in February. Kapoor’s recent hospitalisation was confirmed by his older brother, actor Randhir Kapoor who revealed he had been admitted to Sir HN Reliance Foundation Hospital as he wasn’t doing well. He breathed his last at 8:45 am this morning.