Twitter has been the go-to destination for sports chatter with  #IPL2020, #WhistlePodu and #TeamIndia becoming the most Tweeted hashtags in sports. Movies and TV were no less. Globally, there were more than 7,000 Tweets per minute about TV and movies this year. In India, Hindi film #DilBechara, Tamil film #SooraraiPottru and Telugu film #SarileruNeekevvaru were the most Tweeted about films to release this year, and people took a minute to laugh at the relatability of #Binod, making it the most Tweeted meme.

From re-discovering interests such as #Photography, #Yoga and #Poetry, to throwing back to a different time and getting nostalgic with conversations about #Ramayan, #Pokiri and #Mahabaharat, audiences took to the service giving rise to diverse conversations from the tedious to the unexpected.

Talking about how Indians used Twitter this year, Manish Maheshwari, Managing Director, Twitter India said, “Being the year it has been, conversation on Twitter in 2020 was unique. From the fight against this global pandemic, rejoicing in celebratory moments, standing up for those communities impacted by the pandemic, to bonding over rediscovered shows, interests and memes, India came together beautifully on Twitter this year. In 2021, while the nation bounces back, we hope to continue giving everyone a voice and provide a service to stay virtually engaged with what’s happening in the country and the world.”

Here is a look at the Golden Tweets of 2020 or those Tweets that became the most Retweeted, Liked and Quoted Tweets on the service. From Vijay’s (@actorvijay) connection with his fans, Virat Kohli (@imVkohli) and Anushka Sharma’s (@AnushkaSharma) celebratory news, Ratan Tata’s (@RNTata2000) Tweet pledging support to impacted communities, to Amitabh Bachchan’s (@SrBachchan) Tweet about COVID-19, each of the Golden Tweets reflect what Indians loved talking about in 2020.

These were the most Tweeted Hashtags across different interest areas in 2020. ​

Most Tweeted about current affairs topics 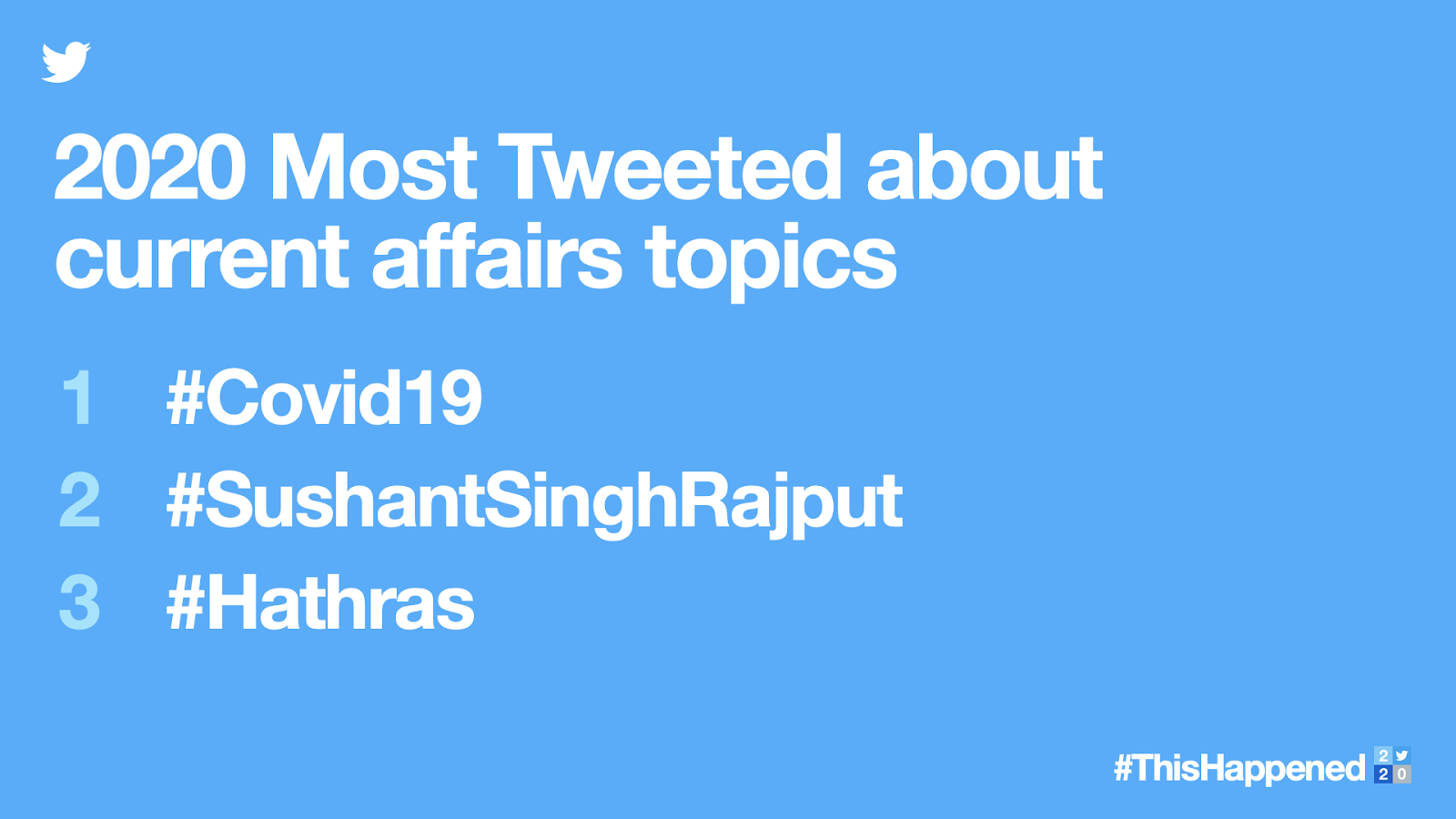 #Covid19: Unsurprisingly the most Tweeted current affairs hashtag this year was #Covid19. People used the hashtag to seek reliable information, connect with healthcare experts and agencies, and follow what was happening in real-time. Globally, Twitter launched a COVID-19 search prompt and a dedicated event page that shared information related to the virus from credible sources such as the Ministry of Health and Welfare of India (@MoHFW_INDIA) and the World Health Organisation (@WHO). Within the larger conversation about COVID-19, hashtags used prominently included #Coronavirus, #JantaCurfew as well as those that encouraged people to #WearAMask, #StayHomeStaySafe and maintain #SocialDistancing. Other popular topics of conversation included the adverse impact on migrant workers as well as gratitude for healthcare professionals across the country.

#SushantSinghRajput: The unexpected demise of actor Sushant Singh Rajput (@itsSSR) became one of the biggest topics of conversation in India this year. Public figures and fans took to the service to express grief, pay tribute to his career, share views about the entertainment industry and discuss developments around the investigation into his passing. In July 2020, fans celebrated the late actor by sharing love for his last film #DilBechara that also became the most talked-about film on Twitter in 2020.

#Hathras: The alleged rape and death of a young Dalit woman in Hathras became a topic of conversation across the country. People Tweeted their perspectives and demanded justice using the hashtag #DalitLivesMatter. 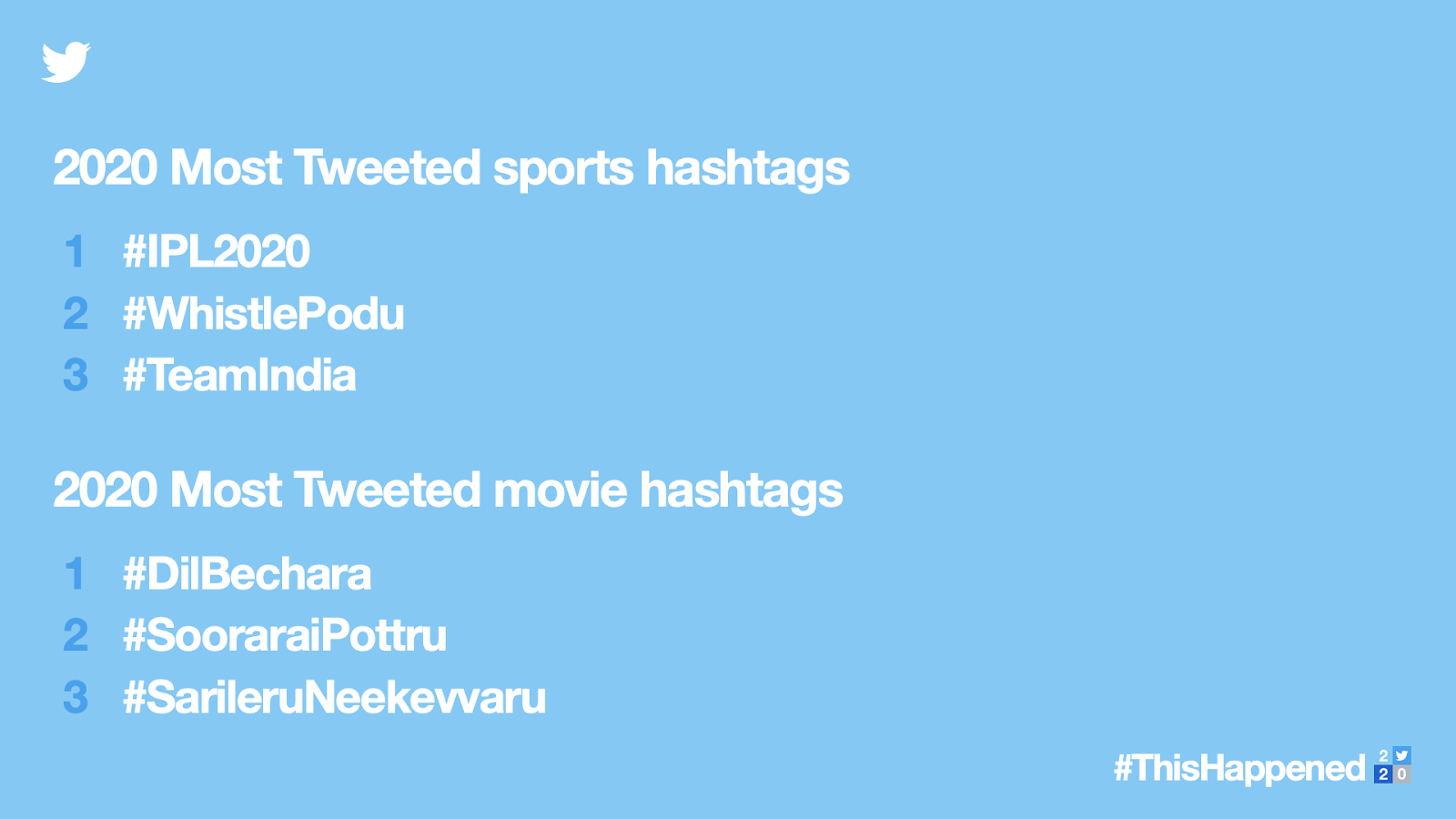 #IPL2020: Twitter was abuzz with Tweets across the 13th edition of the Indian Premier League  (IPL) as the much-anticipated sports season took place later in the year than usual. Cricket enthusiasts celebrated and connected with each other on Twitter, making #IPL2020 the most Tweeted hashtag in sports.

#WhistlePodu: The MS Dhoni-led team Chennai Super Kings (@ChennaiIPL) became the most Tweeted about team in #IPL2020, and subsequently their team hashtag #WhistlePodu became  the second-most Tweeted hashtag in sports this year.

#TeamIndia: Before the pandemic, the stellar performance of the Indian Women’s cricket team at the ICC Women’s T20 World Cup created cheerful conversations and strong momentum on, and off the field.
Most Tweeted movies hashtags: These were the most Tweeted Indian movies that released in 2020

#DilBechara: Fans of the late Sushant Singh Rajput (@itsSSR) Tweeted to express their love for the actor and appreciate his last on-screen performance in the Hindi film Dil Bechara.

#SooraraiPottru: Tamil fans declared the movie a masterpiece on Twitter while praising the performances of lead actors Suriya (@Suriya_offl) and Aparna Balamurali (@Aparnabala2).

Most Tweeted hashtags related to nostalgia 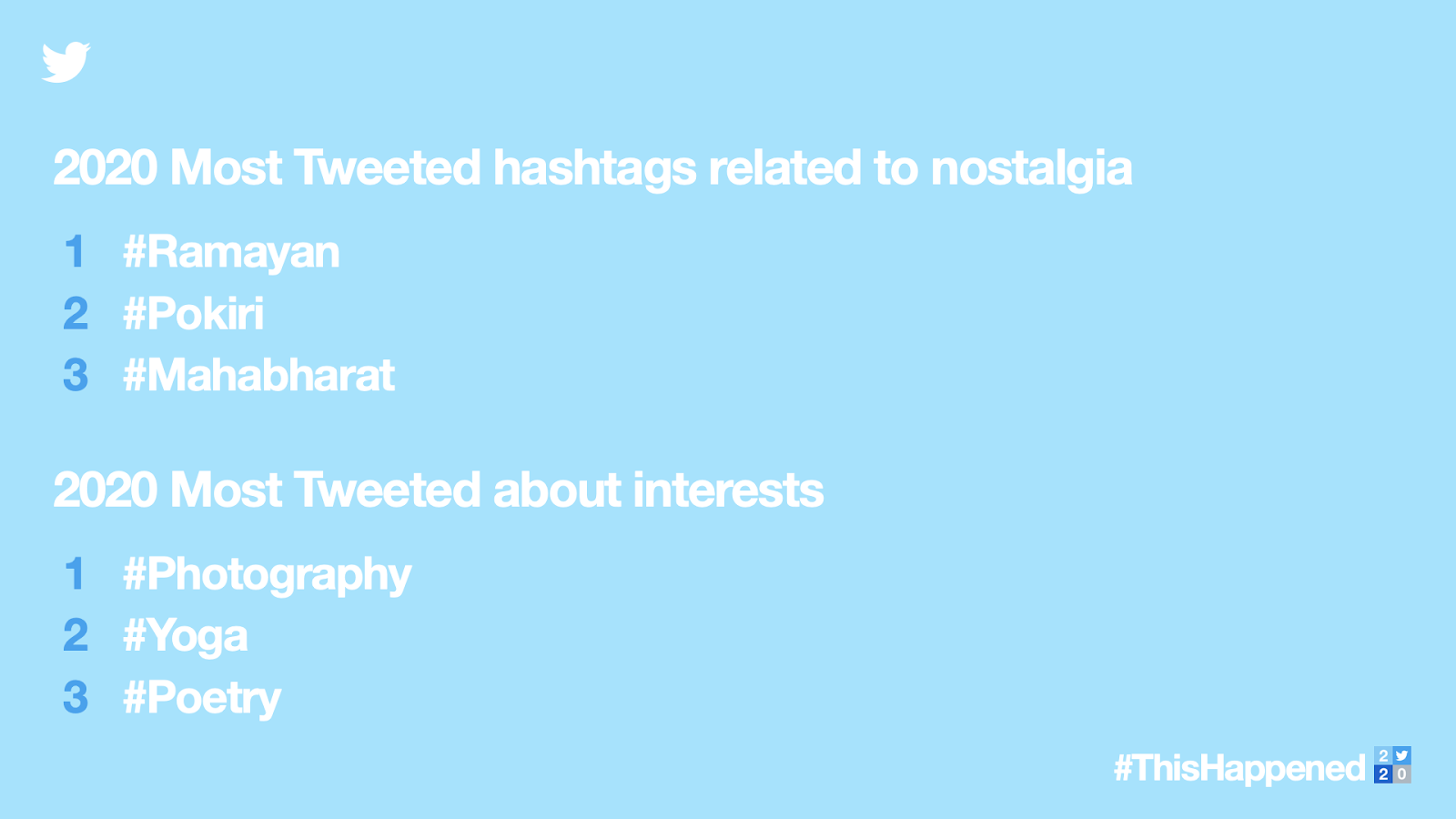 #Ramayan: As Ramayana made a comeback on DD National amid the nationwide lockdown, fans celebrated the show sharing memes and memories related to their childhood experiences of watching the show.

#Pokiri: Fans celebrated the 14th anniversary of the blockbuster Telugu film ‘Pokiri’ this year, and celebrated the star of the movie, Mahesh Babu (@urstrulyMahesh)

#Mahabharat: With the re-run of Mahabharat on DD National, viewers across the country reminisced about their memories of the show and re-lived some of its iconic scenes together.

Most Tweeted about interests

#Yoga: As the nation coped with staying at home and staying healthy, conversations about yoga spiked on the service. From basic wellness asanas to rigorous physical exercise, people came online to get fit. Popular voices from entertainment, sports and other fields Tweeted to strengthen the conversation around yoga.

#Poetry: Inspirational poetry became a finger tap away on Twitter and took off this year thanks in part to the brevity of the medium. Indians rediscovered their love for poetry and shared rhymes on their timelines while attempting to cope with the lockdown.

Most Tweeted meme
Twitter is fun and memes are at the heart of its humour. A mention of “Binod” in a video by Slayy Point (@SlayyPoint) set off the meme, which took over the service. Creators, brands and even the police jumped in on the conversation, changing their profile names and Tweeting videos and pictures. There was a lot of conversation about “Who is Binod?”, but it was clear #Binod was everywhere, securing its spot as the most Tweeted meme on Twitter in India this year. 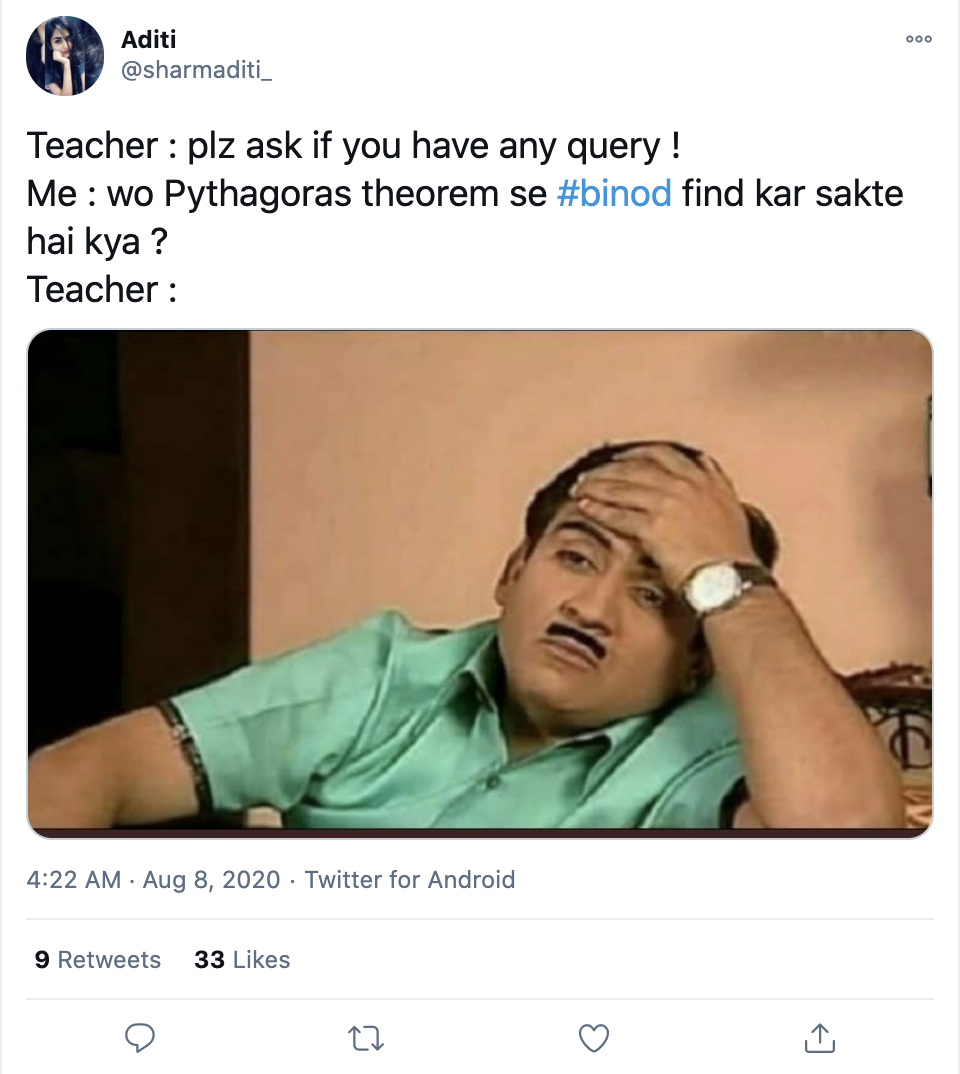 When words fall short, people turn to emojis. Here is the list of the most Tweeted emojis on Twitter in India this year. 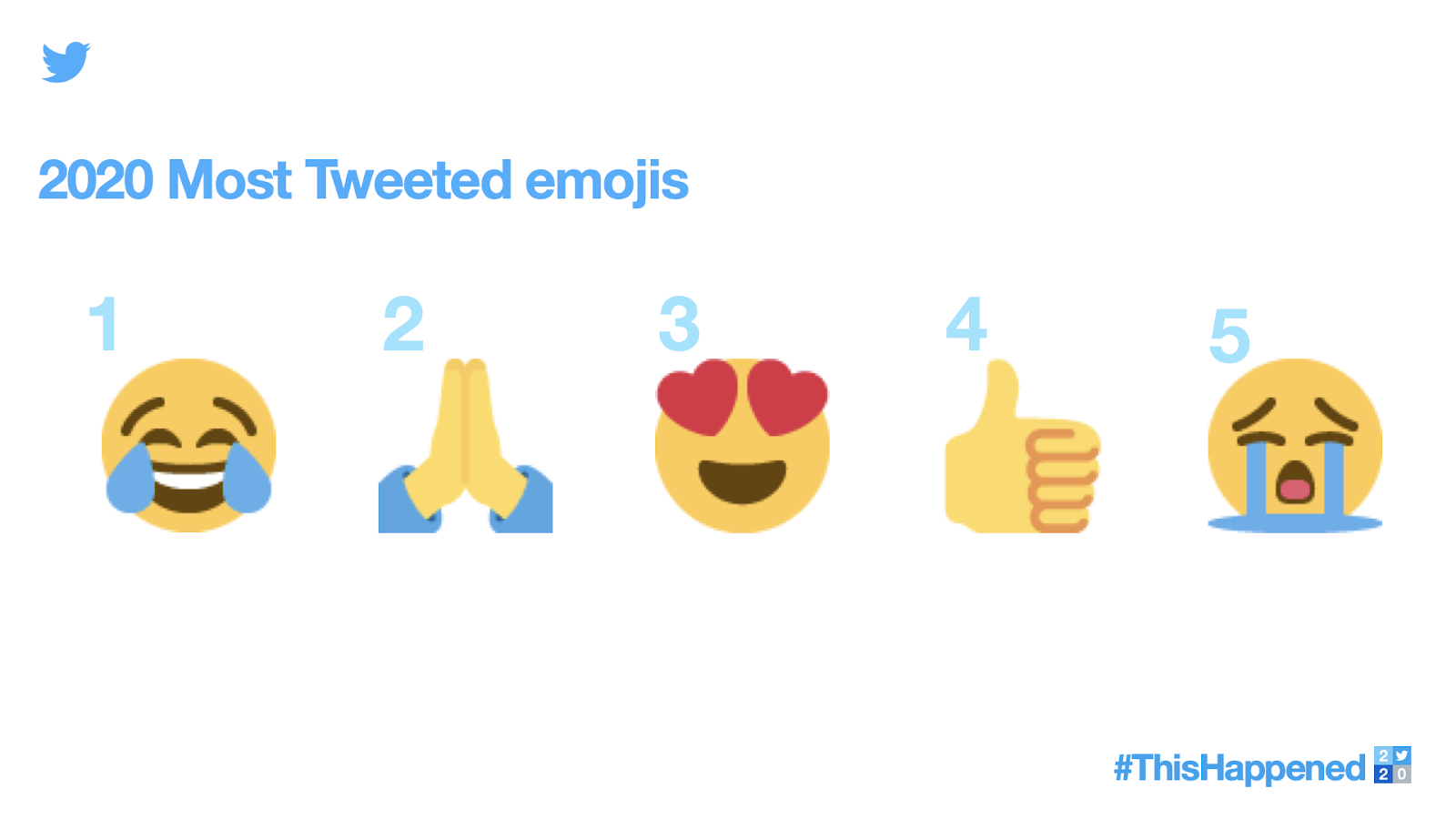