Kangana Ranaut shares her advice on how to wear ripped jeans; tweets 'coolness quotient' should match hers

A day after Uttarakhand's newly appointed CM Tirath Singh was trolled on his comments about how women who wear ripped jeans are setting a bad example for society, actress Kangana Ranaut has tweeted images of herself explaining how one needs to style ripped jeans. The actress' tweet is not a reaction to the CM's comments. Instead it appears like Kangana is reacting to trolls who posted her images and asked the CM what his thoughts are on the actress.

Kangana tweeted, "If you want to wear ripped jeans make sure coolness quotient is of this magnitude as in these pics, so that it looks like your style not your state a homeless beggar who hasn’t got allowance from parents this month, most young people look like that these days #RippedJeansTwitter." 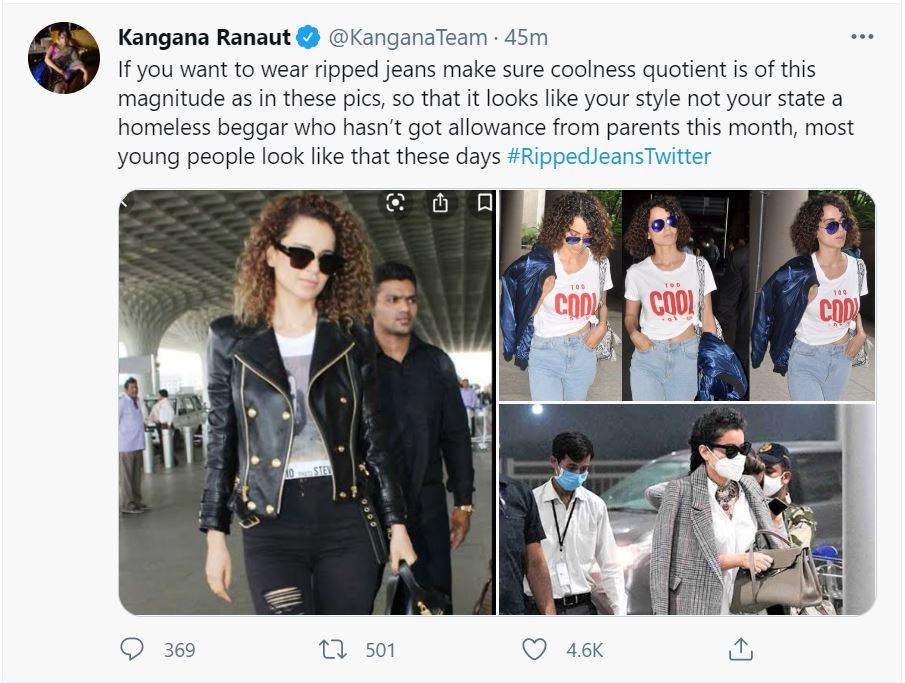 On Tuesday, CM Rawat was speaking at an anti-substance abuse workshop organised by the Uttarakhand State Commission for Protection of Child Rights in Dehradun. He said that ripped jeans are ‘bad examples’ set by parents. He further expressed his apprehension towards bare knees being exposed and went on to draw a parallel between the Indian and western culture. He said, "Kaynchi se sanskaarn (Using scissors to define our culture) – showing bare knees, wearing ripped denim and looking like rich kids – these are the values being given now. Where is this coming from, if not at home? What is the fault of teachers or schools? Where am I taking my son, showing his knees and in tattered jeans? Girls are no less, showing their knees. Is this good? While the western world follows us, doing yoga … covering their body properly. And we run towards nudity."

He recalled an incident where he had met a woman dressed in ripped jeans for an event, but the woman was running an NGO. He said, "If this kind of woman goes out in the society to meet people and solve their problems, what kind of message are we giving out to society, to our kids? It all starts at home. What we do, our kids follow. A child who is taught the right culture at home, no matter how modern he becomes, will never fail in life."

Following this incident, on Wednesday, the #RippedJeansTwitter hashtag started trending with women showing off their ripped jeans in protest against the comments.