Rajinikanth received his second dose of the COVID-19 vaccine on Thursday. His daughter Soundarya took to Twitter to share a photograph of the veteran actor getting the vaccine shot.

Soundarya Rajinikanth wrote, “Our Thalaivar gets his vaccine. Let us fight and win this war against Corona virus together #ThalaivarVaccinated #TogetherWeCan #MaskOn #StayHomeStaySafe.” 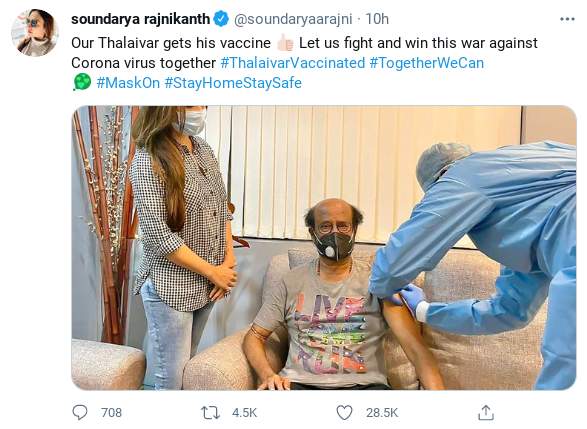 Rajinikanth is seen wearing a mask on his face in the photo, as he gets the jab on his left arm while seated. His daughter is seen standing next to him.

Following this development, the hashtag #ThalaivarVaccinated began trending on Twitter.

Rajinikanth returned to Chennai only on Wednesday, after finishing the shoot at Ramoji Film City in Hyderabad for his upcoming movie Annaatthe. The film is expected to be released later this year after the COVID-19 pandemic becomes less severe. The shoot was put on hold earlier after members on the set tested positive for COVID-19 in December 2020.

Directed by Siva, Annaatthe is said to be a rural family entertainer starring Rajinikanth, Nayanthara, Prakash Raj, Soori, Meena, and Khushbu in pivotal roles. The film is produced by Sun Pictures while the music has been composed by Anirudh Ravichander.

Also read: Rajinikanth won't launch party after a warning from God, asks fans to forgive him