Actor Kangana Ranaut’s much-awaited film Thalaivi, which is a biopic of the former chief minister of Tamil Nadu the late J Jayalalithaa, is all set to release in theatres on April 23.

The makers made the announcement on Wednesday, on the occasion of the 73rd birth anniversary of actor-turned-politician J Jayalalithaa.

Taking to Twitter to share the news, Kangana Ranaut wrote, “To Jaya Amma, on her birth anniversary. Witness the story of the legend, #Thalaivi, in cinemas on 23rd April, 2021.” 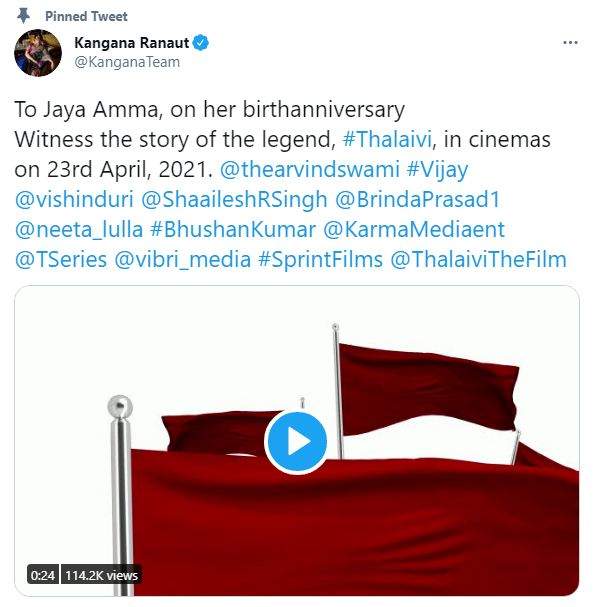 Kangana had earlier teased fans about the big announcement by posting on Twitter, “On #Thalaivi’s 73rd birth anniversary, stay tuned as we make an important announcement at 6:35 PM today!”

The film will be released in Hindi, Tamil, and Telugu and is directed by AL Vijay. Writer for Baahubali, KV Vijayendra Prasad and Rajat Arora, who wrote the script for The Dirty Picture, have come together to pen the story for Thalaivi.

The shoot for the film was wrapped up in December 2020.

The film will showcase the life of Jayalalithaa, her rise in the cinema industry as an actor, and her journey towards becoming a powerful politician.

The actor had earlier compared herself to Jayalalithaa and said in an interview, “She was a very reluctant actor. It is the same with me. I never wanted to be an actor, and that is why we became very unusual actors.”

“I think she always felt that she was worth much more than just being a glam doll [in films], and she became a politician. Like how I became a filmmaker because I felt that being an actress was very limiting for me. So, I think there are parallels,” she said.

Kangana reportedly gained 20 kg for her role in the biopic and underwent body transformation, which she claimed: “severely damaged her back”. She added that, however, the way the film had shaped up was worth the pain. The actor had also taken language classes and learned Bharatanatyam to play her role better.

According to media sources, producer Vishnu Vardhan Induri had earlier revealed that famous Hollywood artist Jason Collins, who has worked on movies like Blade Runner and Captain Marvel, helped with Kangana's appearance in this film.