After years of speculation and months of hype, the first laptops and desktops powered by Apple Silicon that we saw launched at the ‘One More Thing’ Apple event in November are here. The MacBook Air, by far Apple’s most popular Mac, is among the first to get the bump up to the all-new Apple M1 chipset, and while it may look like it was separated at birth from the 2020 Intel-based MacBook Air that launched barely six months ago, the M1 Air represents one of the biggest upgrades for the Air series…ever.

Before I explain further, a quick history lesson on Apple Silicon and the new M1 chip is in order. Apple’s Mac lineup has, since the past 14 years when it famously made the transition away from PowerPC, run on Intel chips. Over time, the overreliance on Intel cramped Apple’s release schedules and how much they could tweak the chip to macOS’ benefit. Meanwhile, Apple had been honing its chip chops on the ARM-based A-series mobile chips, and earlier this year, Apple announced a two-year transition away from Intel to Apple Silicon at WWDC 2020. With the M1 chip, Apple now owns the whole process, from the chip design to what components and capabilities go onto the chip. Owning the entire hardware-software stack is an approach that’s served Apple well on iPads and iPhones, but does it reap the same rewards on the Mac? 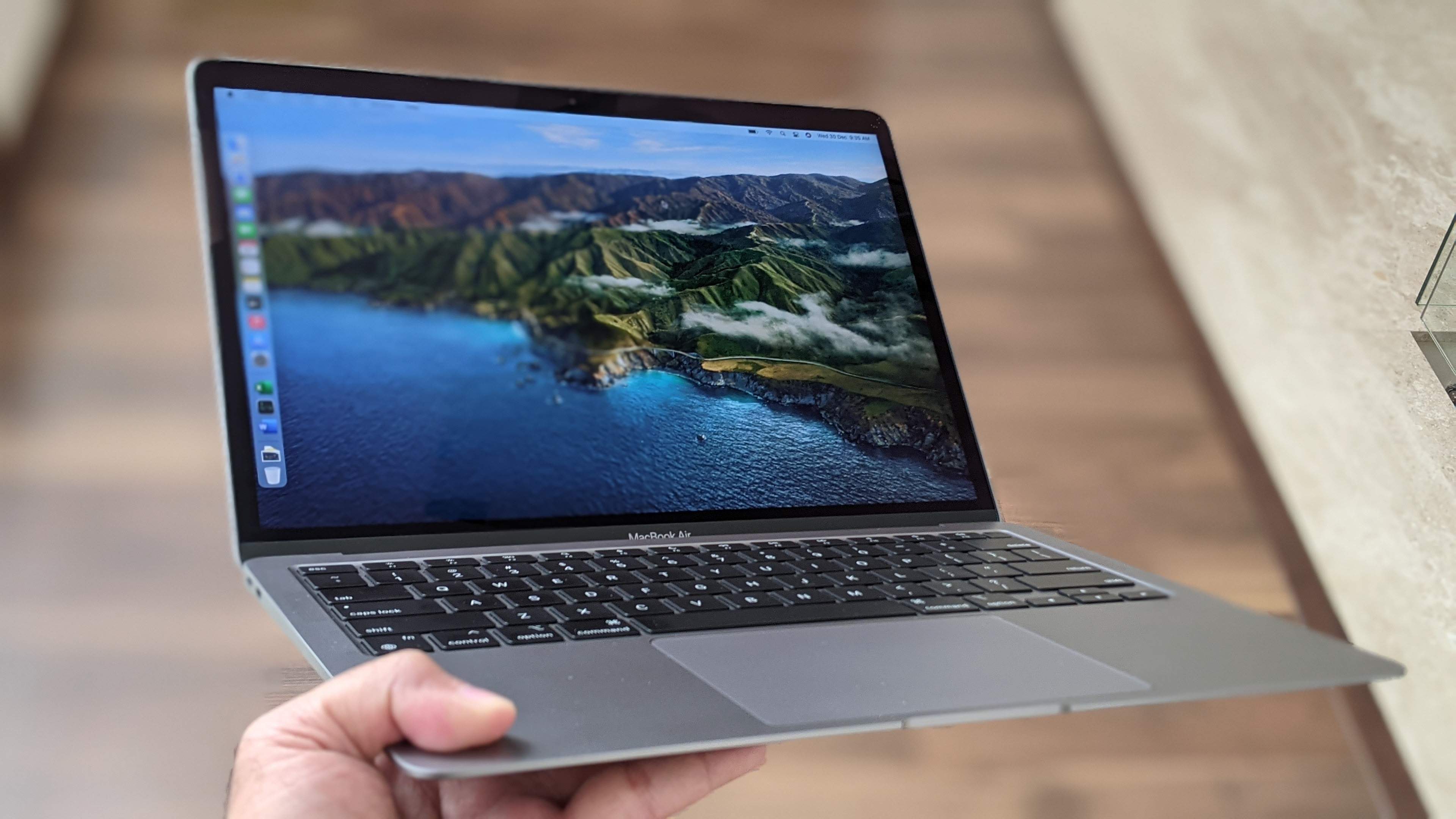 In a nutshell, hell yeah! All the hype you’ve heard about the performance and battery life boost over the previous generation MacBook Air is real. I’ve had the entry-level MacBook Air with 8GB of RAM and 256GB of storage in for review – this is a model that will be the crowd-puller with its comparatively lower price of entry (Rs. 92,900) compared to the pricier Pros (Rs. 1,22,900) and the higher-spec Air with one extra graphics core and twice the storage (Rs. 1,17,900). My initial skepticism of using an 8GB RAM machine wore out rather quickly as I saw, firsthand, that 8GB of the M1’s unified memory isn’t the same as the 8GB RAM on an Intel-powered Air. It’s a bit like the situation with iOS devices running with less RAM than Android devices and the du jour 12GB of memory they pack. Apps optimized for the M1 chip, which includes all of Apple’s native macOS apps and an increasing list of everyday apps such as Chrome and Microsoft Office, simply don’t need as much RAM to run as they did back on the Intel Macs, and the unified memory integrated onto the M1 chip just goes further with these apps.

Let me put things in perspective. On the 16-inch MacBook Pro with 16GB of RAM, I frequently run out of RAM with about 20-30 tabs in Chrome, Final Cut Pro, Lightroom, Twitter, Excel, Word, Slack and a couple of utility apps open at the same time. Throw the same workload on the M1 MacBook Air with 8GB of RAM, and the Air doesn’t even flinch! I then have to bump up the number of open tabs in Chrome to the point where it’s borderline ridiculous to have that many tabs open….and throw in a 4K movie playback in VLC to finally start seeing things slow down. Even then, it came down to a couple of indie utility apps and a VPN client which weren’t optimized for the M1 chip so they were running translated via Apple’s Rosetta 2 emulation framework - here, the “translation” is for Intel-based Mac apps to run on M1, a process which is seamless to the end user beyond a one-time installation of the Rosetta 2 software. Even running via Rosetta 2 on the M1 Air, the Intel versions of Photoshop actually ran faster in my testing than they used to on the Intel-based 16-inch MacBook Pro. Now, that’s saying something.

For folks with everyday needs, you’re not even going to see any of your regular apps facing compatibility issues with the switch to the M1 architecture. Of course, there may be the odd enterprise or work app that may not be supported, even with Rosetta 2’s Intel emulation, so you may want to Google ahead of time to check. More and more developers are updating their apps for Apple’s M chips, and native apps will come sooner rather than later, thanks not only to the big performance boost app developers are seeing on the new chips but the fact that Apple will release many more Macs with M chips going into 2021.

But here’s the clincher - Apple’s own video editing software Final Cut Pro is optimized for Apple Silicon, and for the first time, I felt comfortable running a pro app like FCP on a MacBook Air. Running the same software, same workload on the barely-six-month-old Intel MacBook Air was, let’s just say, the software equivalent of watching paint dry. The fact that I was able to export 4K content without any freezes while I had a whole bunch of everyday software open just boggled my mind. This is a MacBook Air, for crying out loud! For the “pro apps” experience to be closer instead to last year’s 16-inch MacBook Pro – the exact same edits and a 4K export taking just a couple of seconds longer on the Pro than the M1 Air – is the biggest testament to just how big a leap the M1 chip is. A caveat, though – while my basic workload on a pro app like Final Cut Pro worked well, folks with more demanding workflows would do better with an M1 MacBook Pro that has an actual fan to cool things down and sustain a heavy workload for longer. Yep, did I mention the M1 Air has no fan? Its…silent. Whether you’re running multiple tabs in Chrome or exporting a video, the Air is like that old saying – it’s “seen but not heard”. This bears repeating – the sheer performance on the M1 chip is nothing short of unreal. 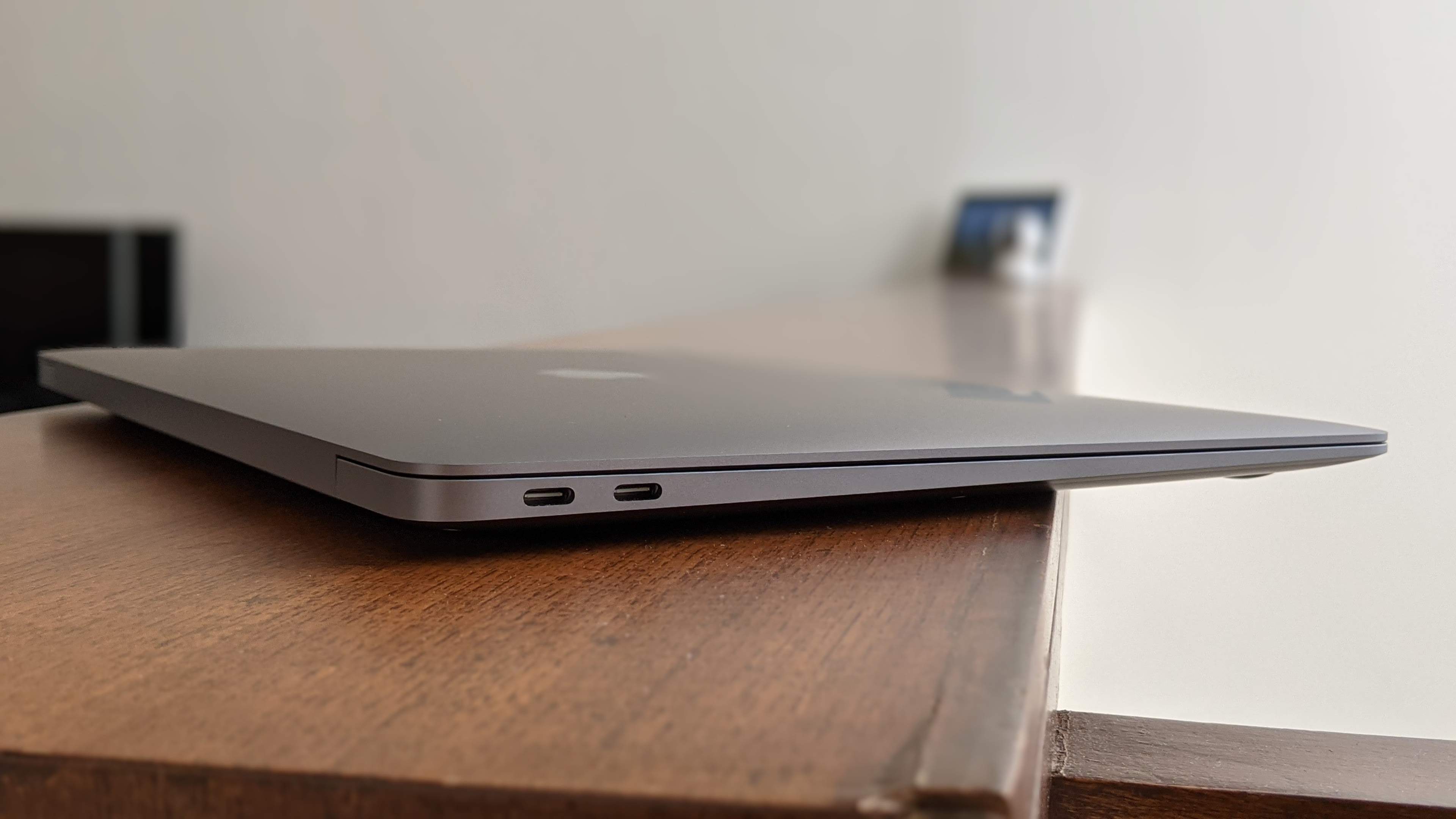 What pushes this into ‘rub-your-eyes-to-check-again’ territory is the insane battery life one gets with the M1 Air…even when you’re stressing the processor and graphics this hard! The first time when I went past a whole day of my regular workload of multitasking between several browser tabs, Zoom calls and streaming video/music and whole lot of email and Twitter, I did a double-take. This is the kind of workload that would have me reaching for the power cord less than halfway (3-4 hours) in, and here I was ending the day with some juice to spare. On other days with a lighter workload and display brightness set to 50 percent, the Air went from 8am to 11pm when I finally gave up for the day….and on media-heavy weekends with casual browsing, it went into multi-day territory…almost iPad like in battery charging cycles. No matter how you look at it, this is insane longevity for a laptop, more so given the power on offer here.

But here’s the thing. As much as has changed under the hood, the outside is completely familiar, maybe a little too much so to be indicative of a completely new generation of Mac hardware which, by virtue of the M1 chip, it is! Apple could have used this as an opportunity to redesign the Air completely, but the familiarity allows for a more gradual sense of transition and a complete focus on the updated internals, I suppose. The 1.35kg all-aluminum wedge retains the same industrial design of the Intel-based MacBook Air from earlier this year, and little has changed about the keyboard, trackpad and display, which is a good thing. Why? Well, the improved scissor-style keyboard is still terrific to type on (and there are small, handy tweaks to the Function row of keys), the trackpad is best-in-class and the 13.3-inch IPS Retina (2560×1600-pixel) screen is tack sharp and bright, plus it has the same DCI-P3 wide color gamut and True Tone support as the Pro lineup. Could the bezels have been slimmer, maybe ‘Dell XPS 13 slim’? Sure, why not - but I see that coming to the pricier Pros first before the entry-level Air, that’s for sure. The speakers sound good too, for a laptop this thin. 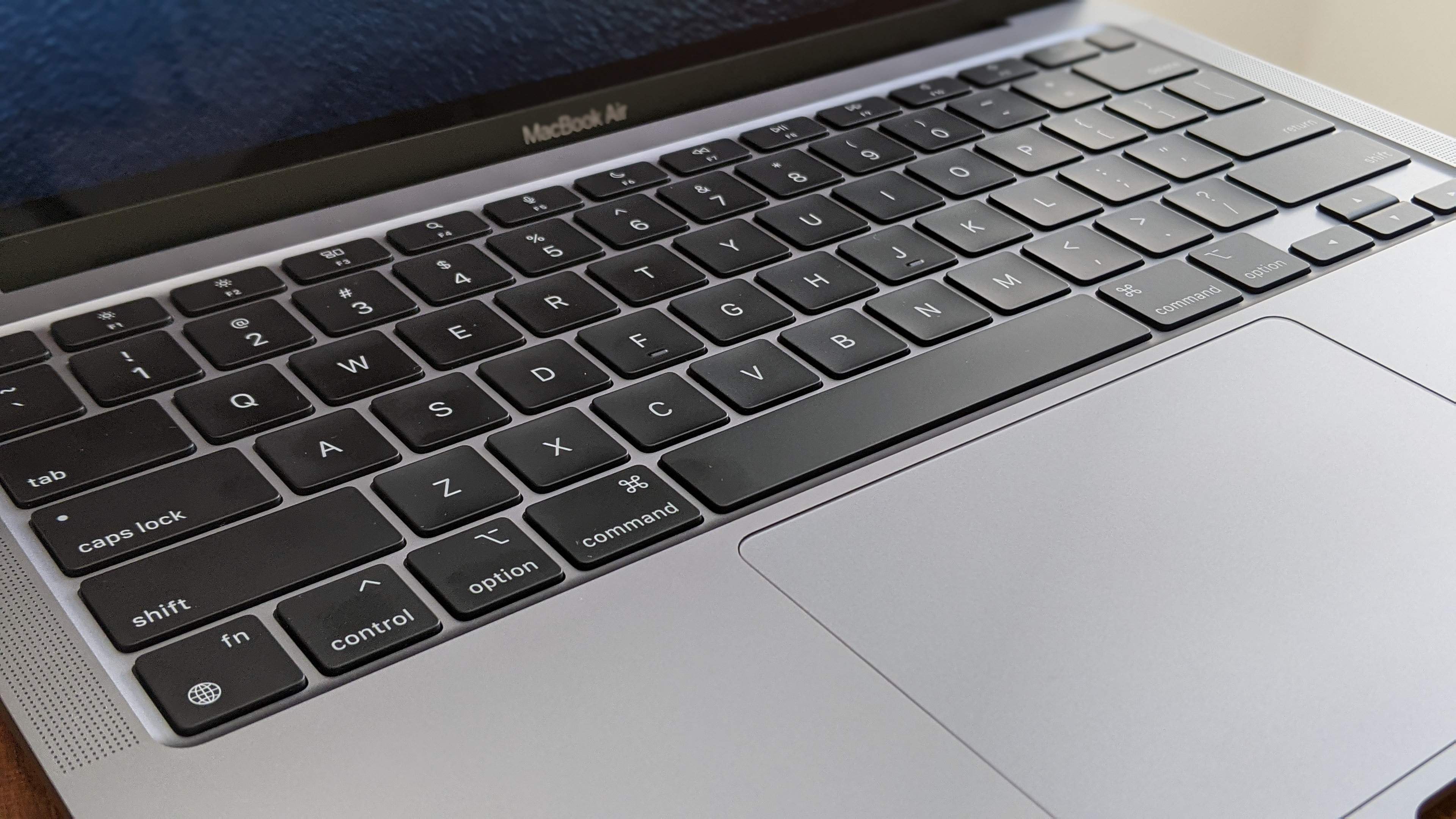 Sadly, what hasn’t changed is the 720p FaceTime HD webcam, which just isn’t up to scratch for 2020 and all of its Zoom/Teams/Meets calls. The M1 chip does have a built-in image signal processor that reduces noise and delivers a sharper image than previous Apple laptops, but all the image processing in the world is no substitute for better, higher resolution camera hardware. There are still only two Thunderbolt USB-C 4 on the left, which means an all-in-one dongle is an inevitability, plus the M1 Air can only drive one external 6K 60Hz external display (not two) and drops support for external GPUs (if either of these matters to you). And while macOS Big Sur has been redesigned from the ground up for Apple Silicon, with a new visual overhaul that’s one step closer to iOS, one of the marquee features in Big Sur on M1 Macs – the ability to run iOS/iPad apps on the Macs - is still very much a work in progress. If the app developer has enabled their app to run on Macs, you then have to contend with the keyboard and the trackpad as the input mechanism for what are clearly touch-first apps. 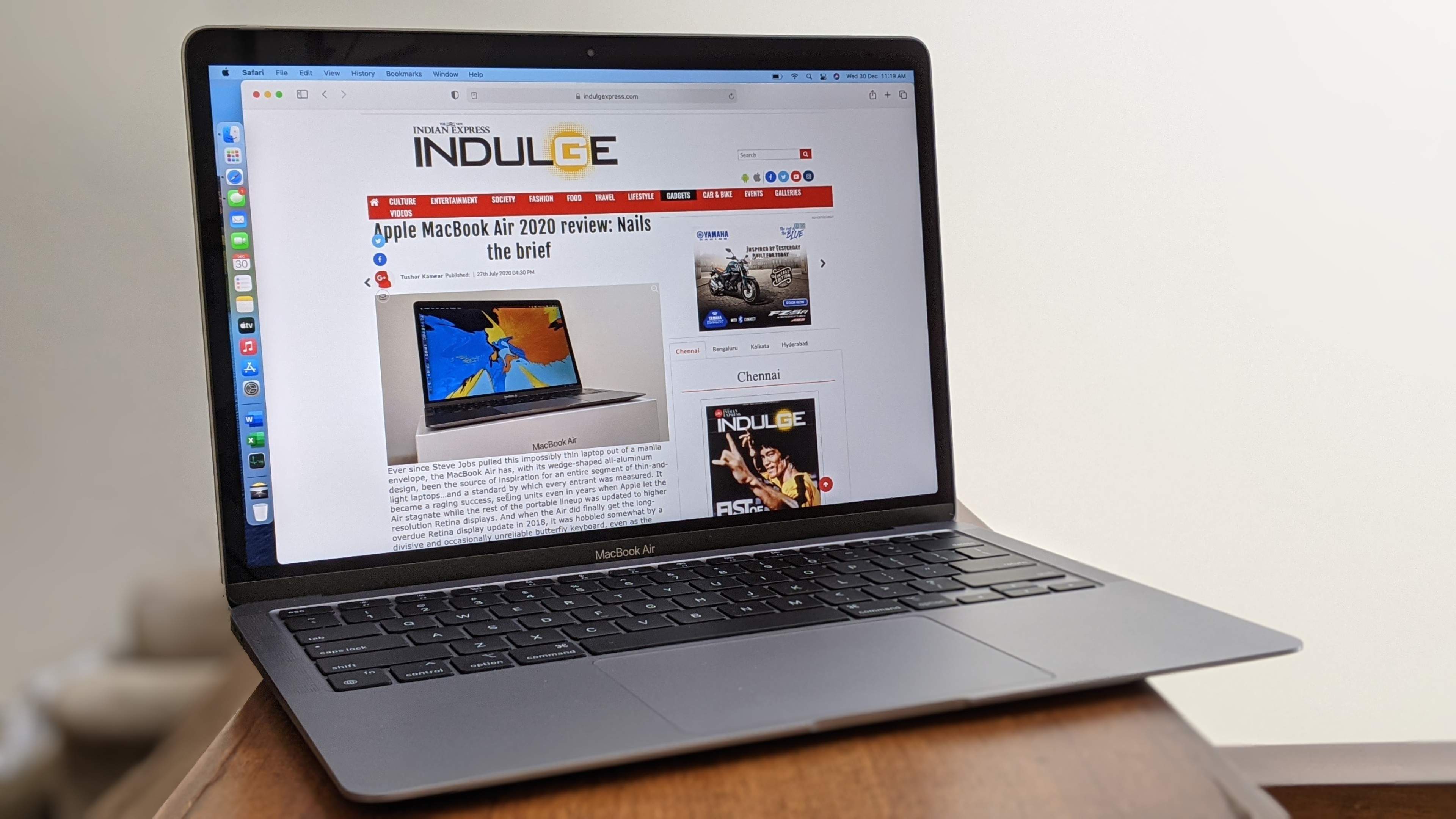 Usually, one would caution buyers against investing in first-generation tech, especially when the shift is between competing chip platforms that require some amount of developer effort to port the most popular apps over. That’s not the case with the M1 MacBook Air, which leverages years of experience on A-series chipset for iPhones/iPads to deliver the leap from a middling thin-and-light laptop to a performance-oriented ultraportable. The M1 chip is a revelation, allowing the MacBook Air to do what you would typically demand of a ‘Pro’ series laptop or iMac, but in a thin, light fanless package that lasts stupendously long for a device this powerful. Aside from the crufty webcam, you’d be hard-pressed to find a problem with the new Air or for that matter, to push it to a point where it slows down. Apple’s completed upended what one can expect from this form factor and I don’t think enough realize how much of a big deal the new M1 Macs are… and this is just the beginning!