Android tablets have been all but overrun by the juggernaut that is the iPad and its thriving tablet app ecosystem, but the last bastion that still stands is the Samsung Galaxy Tab portfolio, of which the Tab S7+ is the cream of the crop. It improves on what made the Tab S6 from last year the best Android tablet around, adding on the latest internals, a second-to-none high refresh rate display and support for Samsung’s iconic S Pen and DeX productivity enhancements. Samsung’s clearly got the iPad Pro in its crosshairs with the fully kitted out Tab S7+, but is the best of the Android side of the tablet world enough to take a second bite out of the once-bitten apple while justifying the not-insignificant outlay? Let’s dig in. Straight of the box, it’s evident Samsung is going for the laptop-replacement form factor with the Tab S7+, and the good bit is that unlike the iPad Pros and Surface tablets it competes with, this one ships with a S Pen stylus in the box. The S Pen attaches magnetically to a black strip on the rear both for stowage and charging. If you pick up the keyboard cover (an additional Rs. 17,999), one half attaches magnetically to the bottom of the tablet and the other on the rear panel, with the latter adding in a Surface style kickstand for propping up the tablet in laptop mode plus a small flip-open nook to accommodate the S Pen. For your money, you’re getting a fit and finish which improves upon last year’s Tab S6 in a discernible fashion, even though with its thin bezels, aluminum frame and rear, and flat edged design, the Tab S7+ bears somewhat of a passing resemblance to the iPad Pro. That’s not a bad thing, since the focus clearly is on the expansive screen, and the end result is a hair lighter and slimmer than the 12.9-inch iPad Pro. 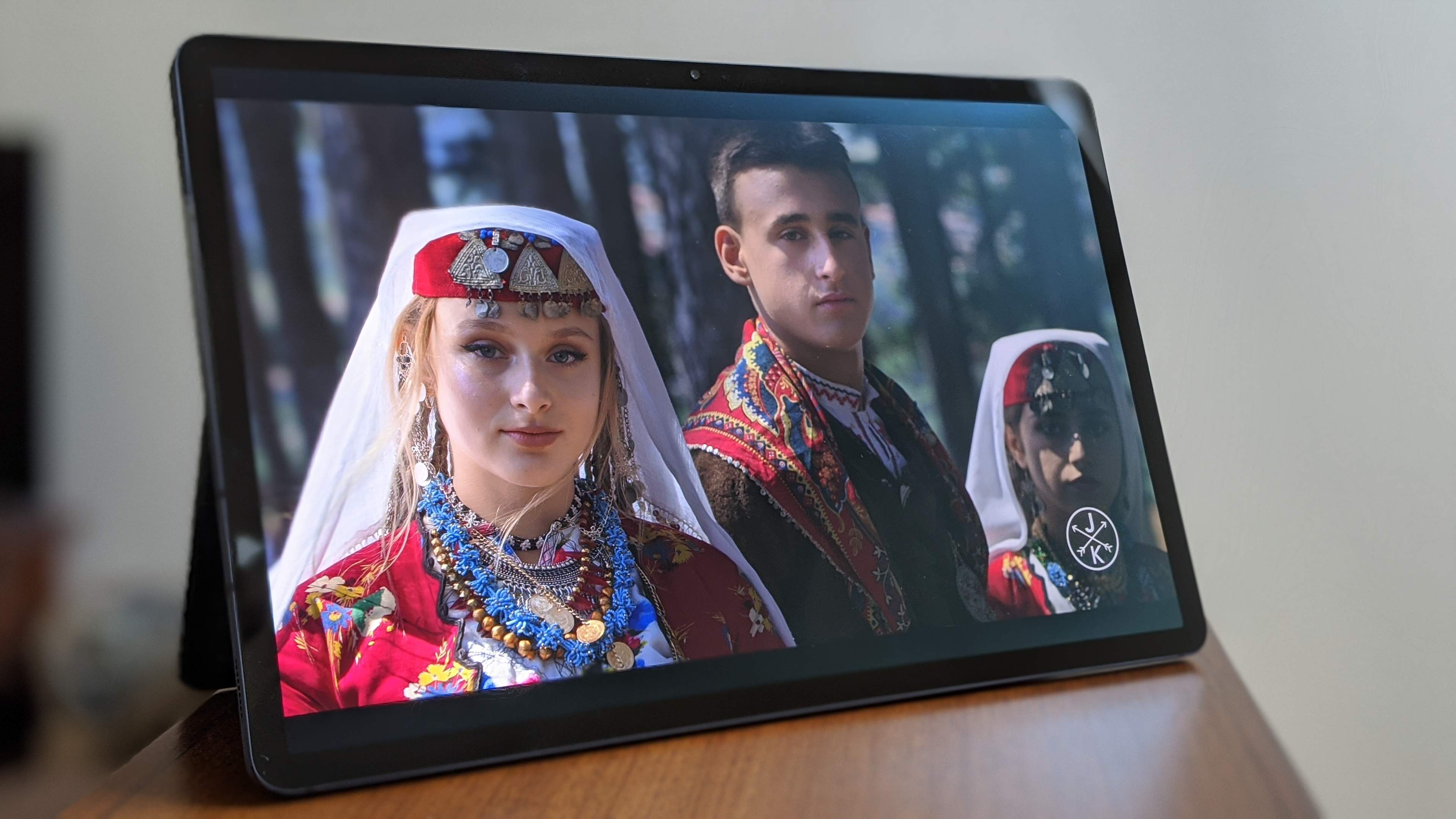 That screen, though. The 12.4-inch, 2,800 x 1,752-pixel Super AMOLED display on the Tab S7+ is a thing to behold, with punchy colors and rich, inky blacks with impressive brightness levels that are great for all manners of media consumption, including HDR10+ content. The 16:10 aspect ratio makes it a tad wider than the iPad, striking a nice balance between casual-tablet and productivity-laptop use, with the higher resolution allowing you to go all the way up to 1440p streaming on YouTube. For a screen that checks all the boxes, Samsung rightly held back on adding a 4K panel to keep battery life and price concerns at bay, but you do get the du jour 120Hz display, which makes everything – from browsing the web, playing games and even simple tasks as navigating the interface and launching apps – exceptionally smooth and fast. You can dial the refresh rate down to 60Hz to save some battery, but I highly doubt you’ll go back after you’ve tried it once. Rounding out the experience is the presence of four Dolby Atmos-enabled speakers which, like the ones in the iPad Pro, pump out full and loud stereo sound no matter whether you hold the tablet in portrait or landscape. No headphone jack though. 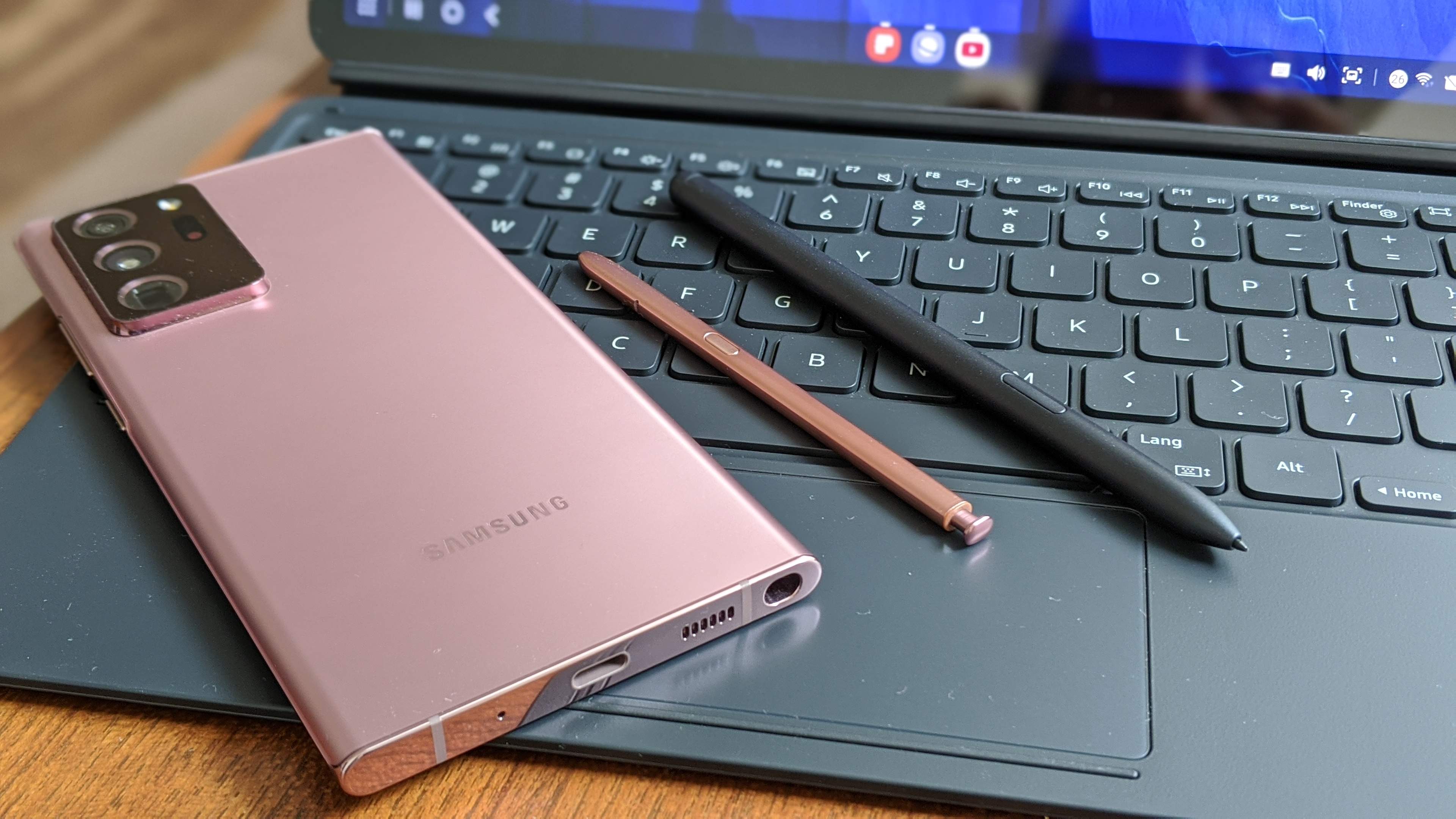 With Samsung trying their best to deal with Android’s less than ideal tablet ecosystem (more on that and DeX later), the company went all out to kit the Tab S7+ with the latest hardware around. So you get Qualcomm’s latest Snapdragon 865+ chip with 6GB of memory and 128GB of storage, which means the tablet handles apps and games with ease, even if you run multiple apps on screen at the same time. It runs One UI 2.5 on top of Android 10, and much like the Z Fold 2, allows up to three apps in split-screen view… except of course, apps that don’t work well in landscape view (Instagram, I’m looking at you!).

And then there’s the S Pen, which has access to the entire set of software doodads that you may recall from the Note 20 Ultra plus the lower 9ms latency that gives the whole experience a boost of responsiveness. Doodling, live conversion of your scribbles and marking up documents, all work well but when all is said and done, I find the placement of the S Pen stowage on the rear a little bit awkward. 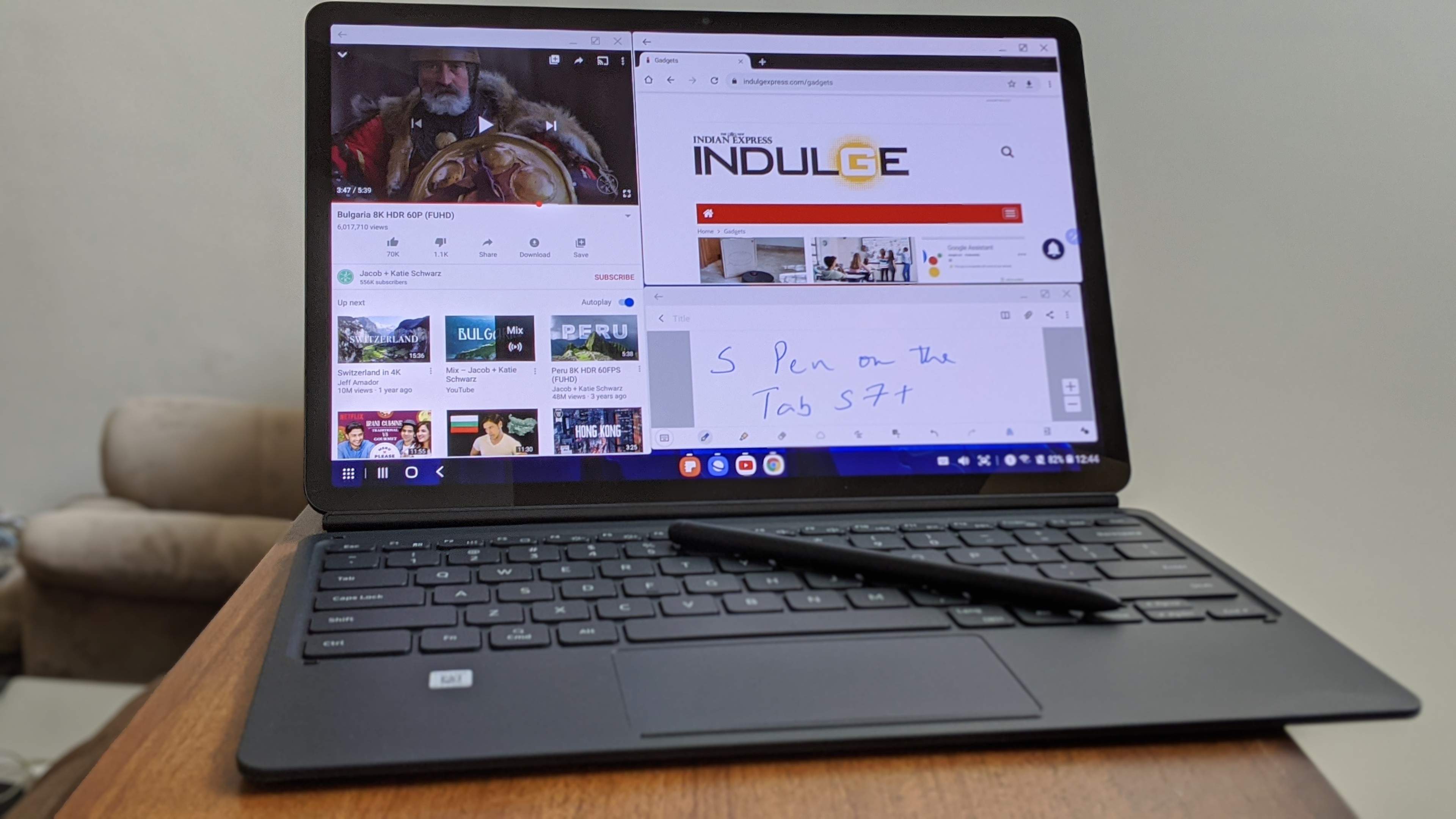 Of course, to make the most out of the tablet as a productivity device, you’re going to want to go into the upgrade DeX experience, which converts Android into a quasi-PC, replete with a task bar at the bottom, apps opening in windows and keyboard and mouse support. Most first-party and Google apps work well within Dex, while some others don’t take too well to resizing or working in windowed mode, so your mileage may vary. Day to day productivity apps worked well enough, but you may want to check if the apps you use (and the systems you rely on) play well with DeX before you commit to DeX as a laptop replacement. On the whole, DeX is leaps ahead of the Android experience on tablets, but it’s still got some rough edges. 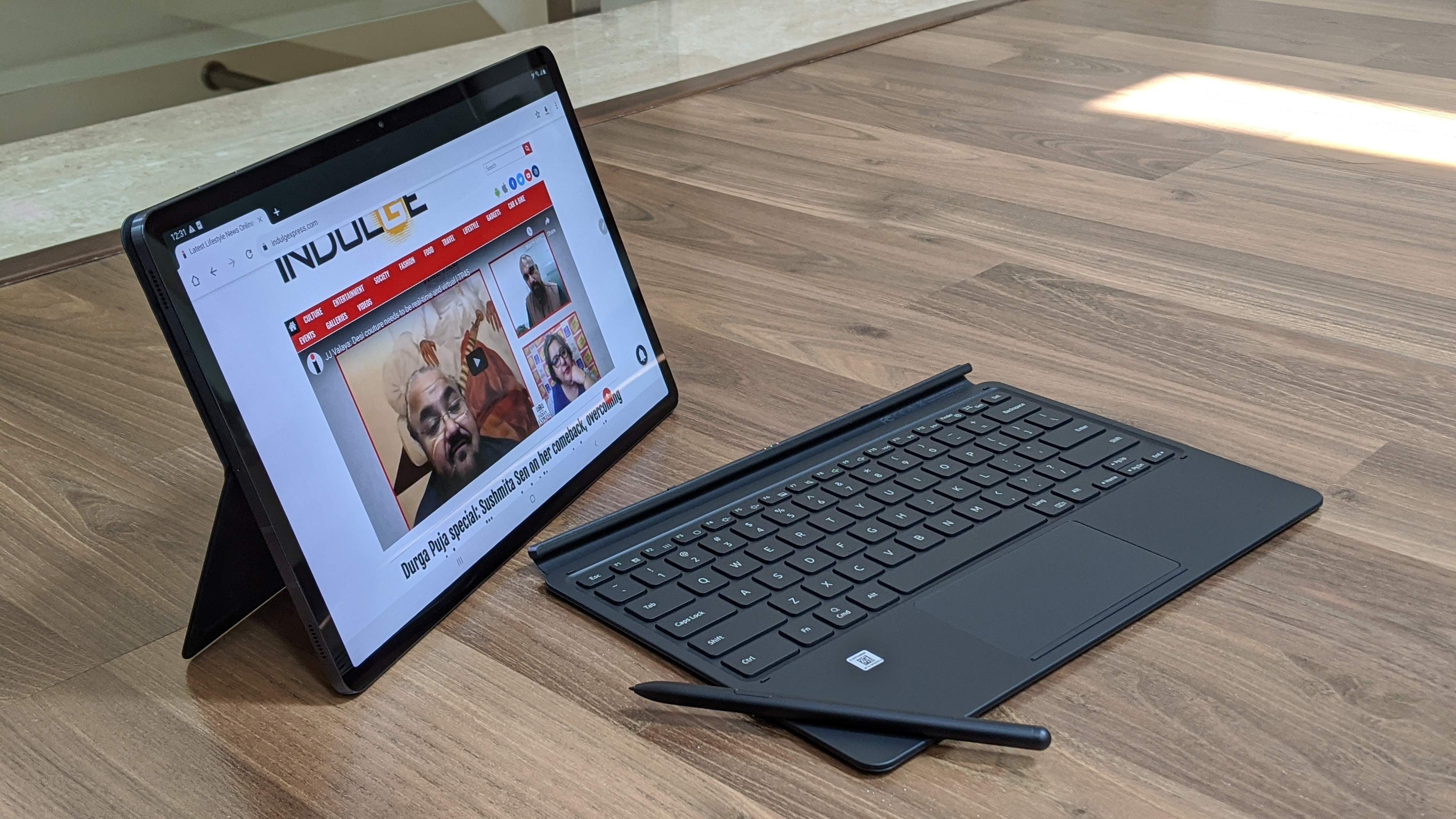 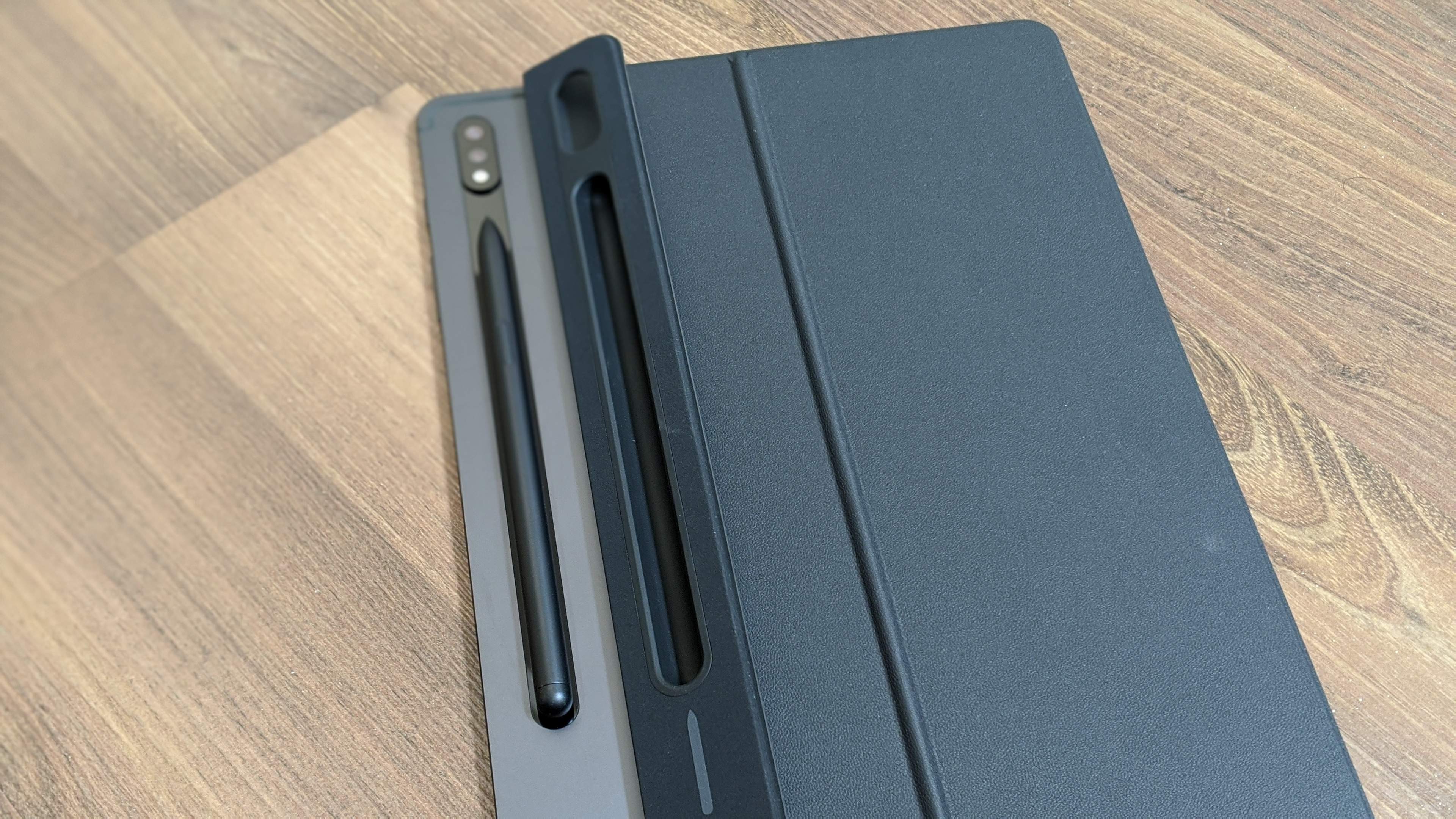 A few quick thoughts on the keyboard cover, which feels rather necessary to get the most out of the Tab S7+ experience, both from the perspective of protection but also to stow away the S Pen properly and have a keyboard/trackpad readily available to use. Compared to the Apple Magic Keyboard, I appreciate the fact that the keyboard can be folded all the way to the back when you want to use the tablet as a tablet, but the kickstand is more suited for use on a table, and it’s got the same issue as the Surface kickstand – not the best for comfortable use on a lap. Other aspects – the dual rear cameras work well, battery life on the 10090mAh battery will allow you to pull through a workday at 120Hz and you get 45W fast charging support, though there’s only a regular charger in the box. 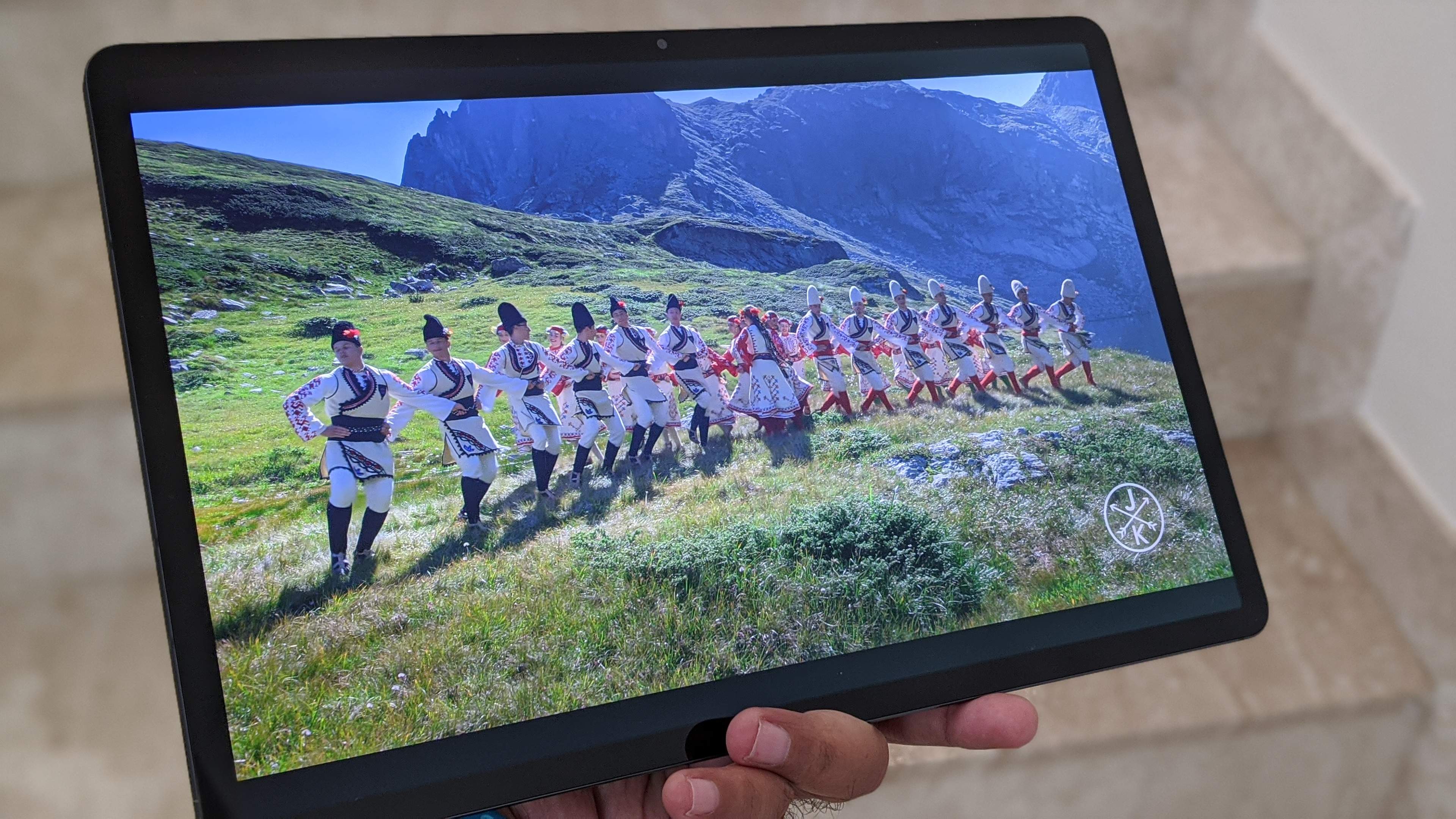 Holding the Tab S7+ in my hand, I’m tempted to call it the iPad Pro for the Android faithful, and there’s no doubt this is the best tablet Samsung has made…nay the best tablet outside of the iOS ecosystem. Samsung has to be commended on how much better DeX makes an Android tablet, even as it serves as a reminder that more app devs need to fix their apps to work better in DeX. In all, the Tab S7+ is a fantastic gaming, multimedia, browsing and entertainment device, and you can even get some work done if you add in the pricey keyboard cover. Some folks may even prefer it over the iPad Pros for the inherent flexibility of file storage on Android.

Cons: Keyboard cover bumps up the price but scores low on lap-ability, not all apps support DeX