Museum confirms that Edvard Munch, who painted The Scream, had written ‘painted by a madman’ on canvas

The mystery surrounding The Scream, a painting by artist Edvard Munch that has been a topic of debate over the last century due to a small, almost hidden inscription on it, has finally been laid to rest.

The painting had a small note written on it, which read, “Can only have been painted by a madman.” The message had triggered a discussion on whether it was a result of vandalism or penned by the artist himself.

However, Norway’s National Museum has now confirmed that Munch had written those words on the painting himself. They also clarified that the inscription had not been a part of the painting initially.

The researchers had compared Munch’s handwriting on the painting with that on his diaries and letters and found the two similar. “The handwriting itself, as well as events that happened in 1895, when Munch showed the painting in Norway for the first time, all point in the same direction,” said Mai Britt, a specialist on Munch’s art and curator of the National Museum. 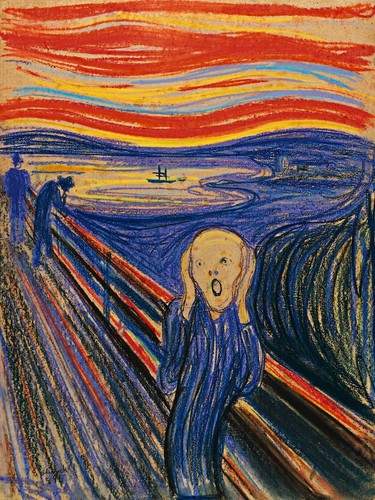 The work of art features a thin, skeletal-looking figure holding its head on both sides with its hands, while its mouth is wide open. The figure appeared to have a horrified, anxious expression on its face, which later became a unanimous symbol for horror, angst, and anxiety across the globe.

When the painting was reportedly displayed in public for the first time in 1895, it stirred widespread speculations over Munch’s state of mental health since the painting had given off an aura of despair as well.

Furthermore, soon after the painting was unveiled, a medical student too had openly questioned Munch’s mental health during a discussion and said the painting had proved that he was “not sound”.

Guleng believed the artist had been deeply hurt by these accusations and had added the inscription soon after.

“It is likely that Munch added the inscription in 1895, or shortly after, in response to the judgment on his work,” media reports quoted Guleng as saying.

“It’s a combination of being ironic, but also showing his vulnerability,” she added.

“He is actually taking this very seriously and he is hurt because there is a history of illness in his family, and he was very anxious, but he showed himself to be marked by it.”

She was quoted as saying, “It was very important for him to take control of his own self-understanding and also how others understood him. This was maybe an act of taking control because others had said that he was mad, but saying, ‘I can make a joke about that.’”

Sources also said that Munch had not gotten over these accusations and kept mentioning them in his journal entries and letters since his family had already had a history with illness. Munch’s father had suffered from depression while his sister and mother had passed away due to tuberculosis.

The painting will be exhibited at the National Museum of Norway that will be opening in 2022, which is why the canvas was analysed again.