Mandira Bedi, whose husband, filmmaker Raj Kaushal passed away on June 30 due to cardiac arrest, shared an emotional post on Twitter on Monday.

Mandira shared a throwback picture of the two of them, in which Raj could be seen pointing at the camera and smiling. She captioned it, “#rip my Raji,” with the emoji of a broken heart.

Take a look at the picture here: 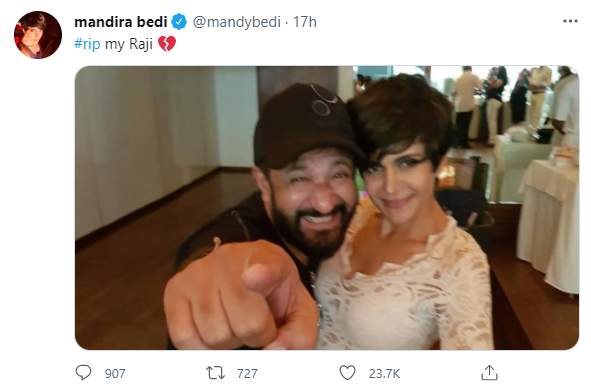 Mandira also shared photos of the two of them on Instagram earlier on Monday with a broken heart emoji in the caption. After Raj’s demise, Mandira changed her profile picture to a plain black screen as a sign of mourning.

The actress was recently subjected to trolling by netizens after she performed the last rites for her husband, which as per religious practices in India, is usually done by male members of the family. While many commended Mandira for breaking stereotypes, others criticised her on social media. Some even commented on her attire that day: a simple white t-shirt and jeans.

Condemning the trolls, singer Sona Mohapatra and actress Mini Mathur came out in support of Mandira and asked people to admire her for her strength and courage instead.

Sona wrote on Twitter, “That some people are still commenting on Mandira Bedi’s dress code or choice to carry out her husband Raj Kushal’s last rites shouldn’t surprise us. Stupidity is more abundant than any other element in our world after all (sic).”

Following her tweet, fans began extending messages of support, with a user saying, “Rightly said. It is disgraceful and shows lack of human feelings to even think, talk about it (sic).” Another netizen wrote, “Well said. That’s no one’s business. People should stand by her during this time and admire her for the courage (sic).”

Meanwhile, Mini wrote, “Makes me sick that people are having a field day trolling a grieving woman for performing last rites on her husband instead of asking a stranger or her tiny kid. Or for not having the time to dress the way THEY imagine grieving women should dress. Fools!! Applaud her strength! (sic)”