The power couple: Suriya and Jyothika get their first dose of COVID-19 vaccine

Celebrity couple Suriya and Jyothika have taken their first dose of COVID-19 vaccine, pictures of which the actor shared on Instagram on Tuesday.

Suriya shared pictures of him and his wife Jyothika getting vaccinated and a photo of the two of them standing behind a board that read, “I am CoVaccinated.” He simply wrote, “Vaccinated,” in the caption. 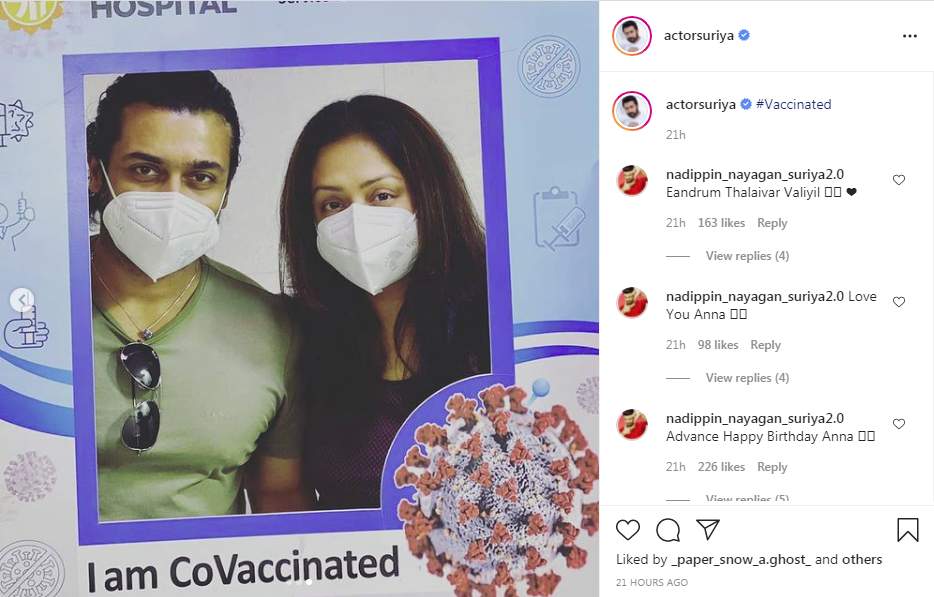 Suriya contracted COVID-19 earlier this year in February. He was admitted to a hospital in Chennai and underwent treatment for a few days. He was in home quarantine after being discharged.

The actor resumed work for an upcoming film with director Pandiraj, that's tentatively titled ‘Suriya 40,’ in March 2021. The movie stars Priyanka Arul Mohan, Suriya, and Sathyaraj in pivotal roles. Posting a picture from the sets, Suriya had written, “Feels good to be back on sets (sic).”

Actresses Radhika Apte and Soha Ali Khan too received their vaccine doses on Tuesday and shared pictures on social media.

Suriya and Jyothika have acted together in several films like Poovellam Kettuppar, Uyirile Kalanthathu, Kaakha Kaakha, Perazhagan, Maayavi, June R, and Sillunu Oru Kaadhal. The duo tied the knot in 2006 and are parents to two children, Diya and Dev.

On the work front, Suriya was last seen in Soorarai Pottru, which was released on Amazon Prime Video in November 2020. The film received widespread acclaim from critics and fans, and is based on the life events of Captain Gopinath, who founded Air Deccan.

The actor has several projects in the pipeline, including a movie with director TJ Gnanavel, opposite actress Rajisha Vijayan, who made her Kollywood debut with the Dhanush-starrer Karnan. Suriya is also working on a film called Vaadivasal with director Vetrimaaran.

Meanwhile, Jyothika was last seen in Ponmagal Vandhaal, which premiered in Amazon Prime Video in 2020.