Actor Sonu Sood came to the rescue of Indian cricketer Suresh Raina, after the latter had tweeted and urged UP CM Yogi Adityanath to help his 65-year-old Covid-19 positive aunt by giving leads for an oxygen cylinder.

Suresh Raina had tweeted, ""Urgent requirement of an oxygen cylinder in Meerut for my aunt. Age - 65 Hospitalised with Sever lung infection. Covid+ SPO2 without support 70 SPO2 with support 91 Kindly help with any leads.@myogiadityanath." 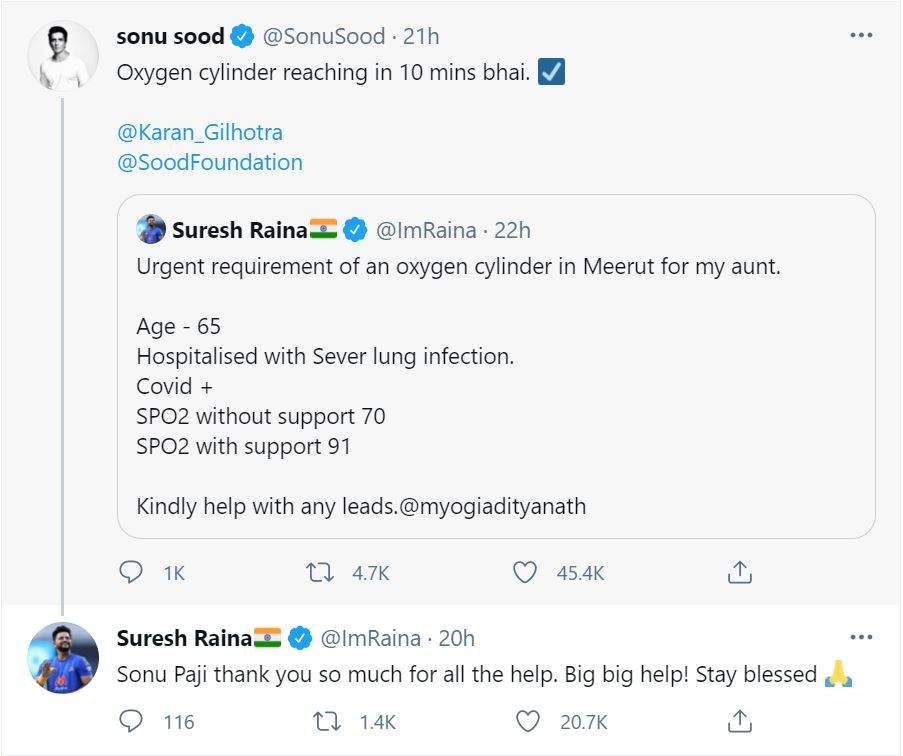 Sonu Sood stepped in during the first wave of COVID-19 to help migrant workers reach home. He has taken forward his philanthropy work during the second wave of the pandemic in India and has been helping people round the clock.

Sonu Sood and his team arranged for more than 16 oxygen cylinders at midnight, earlier this week, and supplied to  ARKA hospital in Bengaluru, where at least 22 people were in critical condition due to lack of oxygen supply.

Media sources said a member of the Sonu Sood Charity foundation, Hashmath Raza had received a call from MR Satyanarayan, inspector of Yelahanka Old Town, about a shortage in oxygen cylinders at ARKA hospital, due to which two patients had reportedly died. The team soon roped in other volunteers and arranged for around 16 oxygen cylinders over the next few hours.