Actor Nitish Veera, who acted in Tamil films Pudhupettai and Asuran, passes away due to COVID-19

Nitish Veera, a popular Tamil actor who is well-known for his supporting roles in films like Pudhupettai and Asuran, passed away on Monday at Chennai’s Omandurar Government Hospital due to COVID-19 complications. He was 45.

Nitish got his break in Kollywood through director Selvaraghavan’s movie Pudhupettai, which was released in 2006. He played the role of Mani, a close confidant and friend of the notorious gangster ‘Kokki’ Kumar (which was played by Dhanush).

Also read: Dhanush to collaborate with his filmmaker brother Selvaraghavan for Pudhupettai 2

Nitish was last seen in Asuran, where he played a negative role (an “upper class” bully) opposite Dhanush.

Condolences poured in from many people in the film fraternity. Director Selvaraghavan took to Twitter to share a picture of Dhanush and Nitish from the sets of Asuran and wrote, “Rest in peace my Mani (sic).” 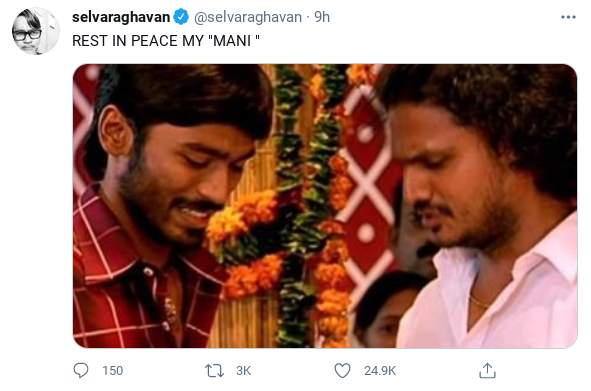 Actor Vishnu Vishal expressed his grief over Nitish’s death and urged people not to take the second wave of the COVID-19 pandemic lightly. He said, “#RIPNitishVeera. It pains to write this... Acted with him in #Vennilakabbadikuzhu and #MaaveranKittu. This covid second wave is taking away so many lives. Be careful and keep your loved ones really close to you... (sic).”

Actor Krishna spoke about the fond memories he shared with Nitish and said, “Rest in peace my friend Nitish Veera. We did two films together #kazhugoo and #Bellbottom. An extremely passionate actor and a kind soul. The second is wave is not a joke guys... can’t lose anyone anymore... pls stay in and stay safe (sic).” One of Nitish’s upcoming projects was the political drama Laabam starring Vijay Sethupathi and Shruti Haasan.

Also read: 'Can't wait for everyone to listen to it': Dhanush on his peppy new song for Vetrimaaran's Asuran