Ten years after the Hindi blockbuster Zindagi Na Milegi Dobara (2011) was released, one of the actors from the film, Abhay Deol took to Instagram on Monday to reveal that Hrithik Roshan had “almost killed” him and Farhan Akhtar during one of the scenes.

Sharing a video on the official Instagram handle of his banner, Tiger Baby Films, Abhay gave a peek into some of the memorable behind-the-screen moments with actors Hrithik Roshan and Farhan Akhtar, and director Zoya Akhtar on the sets.

In the video titled Off The Record with Abhay Deol, Abhay begins by giving a voice-over and explaining the scene where Hrithik stops at a hilly area to take an office call, while Abhay and Farhan make fun of him by calling him a “mantal buoy (mental boy).”

Abhay revealed in the video that the scene had been inspired by Zoya and Farhan’s school teacher from the Maneckji Cooper Education Trust School in Mumbai, who was always teased for saying ‘buoy’ and ‘mantal.’ 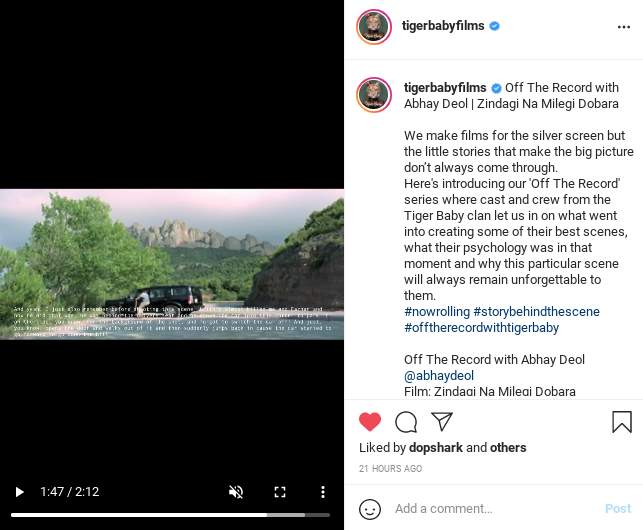 Talking about that particular scene, the actor said, “I think the irony of this scene was that I didn’t actually hear the man (the teacher) say it the way he did. This scene just became iconic… much bigger that I imagined it would go. I was so happy that people responded to it, because I was like, ‘I’m going to ruin this’.”

Also read: Interview: Abhay Deol on his role as an eco-warrior, fitness, upcoming projects and more

Abhay then went on to explain how Hrithik had “almost killed” him and Farhan before shooting this scene near the hill. He said, “I also remember, before shooting this scene, Hrithik almost killed me and Farhan. How he did that was: He was behind the driver’s seat and he drove the car into this corner to park it on to the side, you know, for the background of the shot, and forgot to switch the car off!”

The video shows Hrithik getting out of the car without switching off the ignition, while the car slides forward towards the slope. Hrithik is then seen jumping back into the car to stop it from going down the hill, while Farhan jumps out and runs away.

Abhay recalled that while this was happening, he just sat there without moving and thought, “I’m going to die now.”

He added jokingly, “ I need to be faster about such things.”