Bollywood legend Dilip Kumar had a strong inclination to the colour pink, here's why...

Actor Dilip Kumar, who passed away on Wednesday morning due to age-related ailments at the age of 98, has always had a liking for the colour pink so much so that one could spot him wearing a pink shirt on multiple occasions. But, true fans know that the legend's attachment to the colour pink extended beyond his wardrobe.

Dilip Kumar’s Twitter handle has a pinned post with a picture of the actor wearing a pale pink shirt. The caption reads, “The all-time favourite pink shirt (sic).” 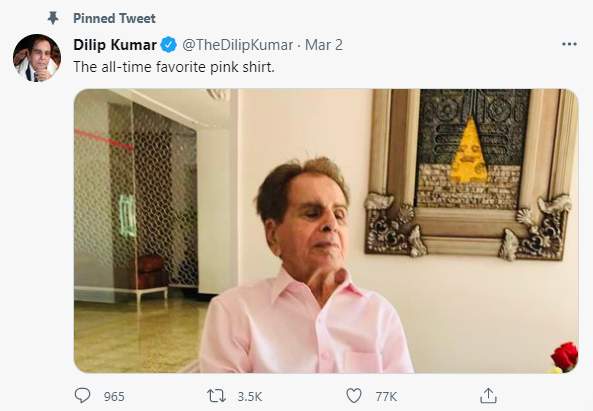 Interestingly, Dilip has been spotted wearing a pink shirt on several occasions. In September 2020, the actor posted a picture of himself and his wife Saira Banu twinning in pink outfits. He wrote in the caption, “Pink. Favourite shirt. God’s mercy upon all of us (sic).” 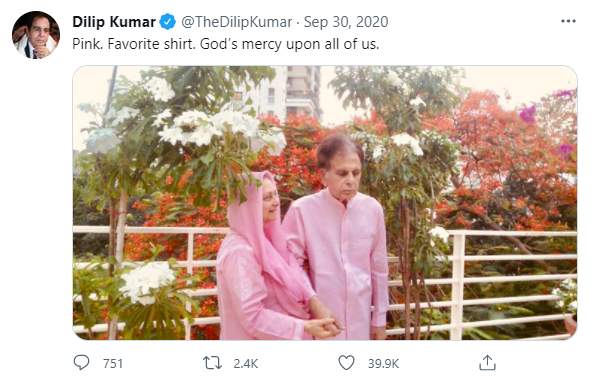 The actor was once again seen wearing a pink shirt during Shab-e-Barat, which is an Islamic occasion. He had captioned it by writing, “Thank you for all your prayers and duas on #Shab_e_baraat. My heartfelt prayers for all of you too (sic).”

Reports noted that Saira Banu too had bought a pink shirt for Dilip once after seeing his fondness for that shade.

Dilip Kumar’s attachment with the colour pink doesn’t stop with shirts. In a touching gesture, Saira Banu had reportedly brought a pink towel for Dilip when he was admitted to a hospital earlier, in an effort to cheer him up.

In what could be considered coincidence (or not), Dilip’s house even appeared to have pink chairs!

Dilip Kumar passed away on Wednesday morning due to age-related illness. He is survived by his wife Saira Banu.