Actress Priyanka Chopra Jonas, who has made it to the Hopper Instagram Richlist of 2021, has landed the 27th spot on it, and reportedly earns Rs. 3 crore ($403,000) for every promotional post she puts up on Instagram.

Priyanka, who has an impressive follower base of 64 million on the platform, stood at the 19th spot last year with an earning of Rs. 2 crore ($271,000) per post. Despite her earnings from the platform having increased significantly this year, her ranking on the list went down since other celebrities and athletes too have similarly seen higher profits.

Cricketer Virat Kohli is the only other Indian within the top 30 on the Instagram Richlist this year. While the cricketer stood at the 23rd rank last year, he overtook Priyanka Chopra and is in the top 20 now, with his current position at 19. Virat Kohli is said to earn an average of Rs. 5 crore ($680,000) per post.

Guess who tops the list? Yes, it’s footballer Cristiano Ronaldo once again, who, with a massive follower base of 295 million people on Instagram, makes a whopping Rs. 11.9 crore ($1,604,000) from each sponsored post.

Also read: Victoria’s Secret ropes in Priyanka Chopra Jonas as one of its supermodels following criticism for hypersexualisation

Other celebrities on the list included actor Dwayne ‘The Rock’ Johnson, who earns Rs. 11 crore with each post, singers Ariana Grande, Taylor Swift, and Selena Gomez, and model and businesswoman Kylie Jenner.

Recently, Priyanka Chopra announced that she signed a contract to be one of the faces of iconic lingerie brand Victoria’s Secret, as well as makeup brand Max Factor. Speaking about her role in Victoria’s Secret, she wrote on Instagram, “Representation matters. It’s crucial for us to show everyone ALL over the world that they matter and are seen! As a founding partner of #TheVSCollective and advisor to the business this is exactly what I intend to do.”

In other news, Priyanka on Wednesday visited the Rock and Roll Hall of Fame in Cleveland, Ohio, where the actress is currently staying. She shared pictures on Instagram of herself with her mother Madhu Chopra, and Krishna Sky, who is the daughter of Priyanka’s stylist Divya Jyoti and Nile Sarkisian.

Priyanka was seen wearing a gorgeous printed dress and was surrounded by shimmering lights. She wrote in the caption, “Thank you @rockhall for giving me and the family such a wonderful time. So amazing to be amongst the greatest ever in Music. Thank you Greg, Shelby, Nwaka and everyone else who made it so smooth. Love u @johnlloydtaylor (sic).”

Take a look at the photos here: 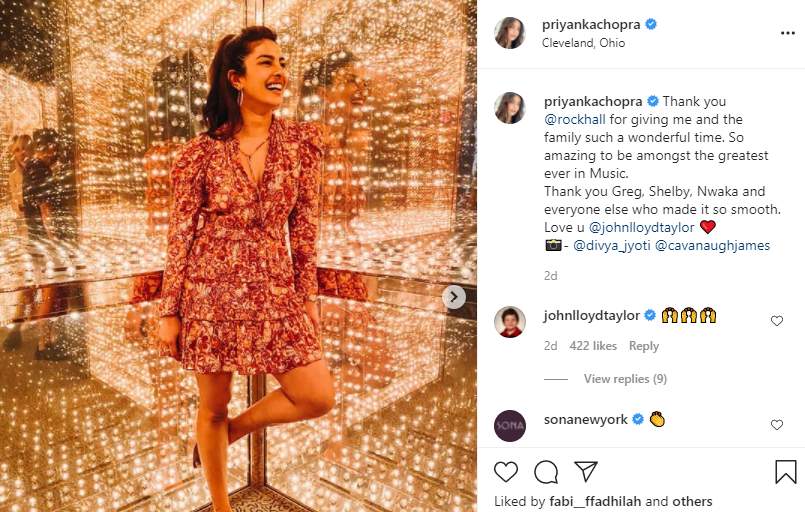