Navarasa, a Netflix anthology produced and presented by veteran filmmakers Mani Ratnam and Jayendra Panchapakesan, is a massive project that has brought nine directors and over 40 actors together for a special cause - to help the economically weak workers of the film industry.

As the tagline of the film goes, “Nine stories, nine emotions,” Navarasa will have nine short stories that will be based on the nine rasas (human emotions): anger, compassion, courage, disgust, fear, laughter, love, peace, and wonder.

Netflix South India released the first teaser of Navarasa on Friday, ahead of the film’s release on August 6. The caption read, “Makkale, ungaloda superstars ellarum kadha solla varanga! (Fans, your superstars are here to tell you a tale!) #Navarasa from 6th August! (sic)” 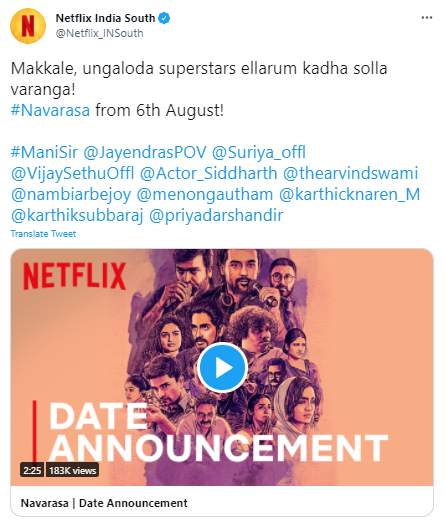 The Navarasa teaser begins with a line appearing on screen that reads, “The emotional journey of an industry coming together to support its people (sic).” The teaser then starts with a slow montage of various actors portraying the nine human emotions, ranging from anger to fear to laughter.

Reports have further claimed that KV Anand, Ponram, and Halitha Shameem (director of Sillu Karuppatti) have helmed the film.

What makes Navarasa even more special is the fact that this film is a pro bono project aimed to help the workers of the film industry, who were severely affected by the COVID-19 pandemic.

Talking about how he came up with the idea for this project, Mani Ratnam told media sources in an interview, “In the pandemic, we (Mani and Jayendra Panchapakesan) talked on the phone, and decided we should do something for the film industry because it has been badly affected. There has not been work for a very long time, and most of them are daily wage earners. We needed to do something substantial, and not just a token thing, which would make a real difference. It needed not just us but the entire industry to come together, so we just had to ask all these actors and directors, they were ready for it. That is something we all are proud of (sic).”

The best part of this entire project? All the artistes in the film have worked for free! Mani Ratnam revealed in the interview that only the industry workers, for whom this project came into existence, were paid their salaries and fee. The only other expense apart from the workers’ salaries was the production cost.

Reports have also mentioned that the profits earned through Navarasa will be used to help these industry workers.

Stay tuned for Navarasa’s release on Netflix on August 6!