Actress Alia Bhatt, who will next be seen in the Telugu film RRR directed by SS Rajamouli, has spoken about the need for vaccination and wearing masks amid the current COVID-19 crisis along with other members of the RRR cast.

In the video shared by Rajamouli, actors Ram Charan, Junior NTR, Ajay Devgn, Alia, and the director spoke about how people could fight the second wave of the COVID-19 pandemic with the help of vaccination, social distancing, frequent sanitisation and wearing of masks.

However, what impressed netizens more was the fact that Alia conveyed the message fluently in Telugu, thereby winning the hearts of Telugu speakers. Meanwhile, Ram Charan spoke his part in Tamil, Jr NTR in Kannada, Rajamouli in Malayalam, and Ajay Devgn in Hindi.

Alia started off by talking about how the second wave has resulted in a record number of infections across the country, all in Telugu. Following this, Ram Charan was heard saying that the nation had to come together to fight the virus this year, just like we did the previous time. 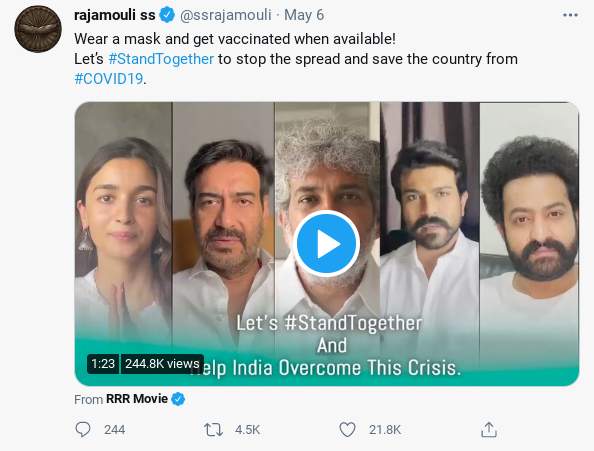 Next, Jr NTR appeared in the video and spoke in Kannada about how masks and sanitisers are the “biggest weapons.” He also urged everyone to maintain social distancing when out in public.

Ajay Devgn then followed up with the message to not believe fake news about the vaccine and asked people to encourage family and friends to get vaccinated.

After him, Rajamouli spoke in Malayalam about how people should step out only when necessary. All five members concluded by reiterating the message to wear masks and take the vaccine.

Praises poured in for Alia on social media, with netizens appreciating her for her perfect pronunciation and fluent speech. A user wrote, “Wow, didn’t expect Alia’s Telugu to be damn near perfect. Nailed it.” 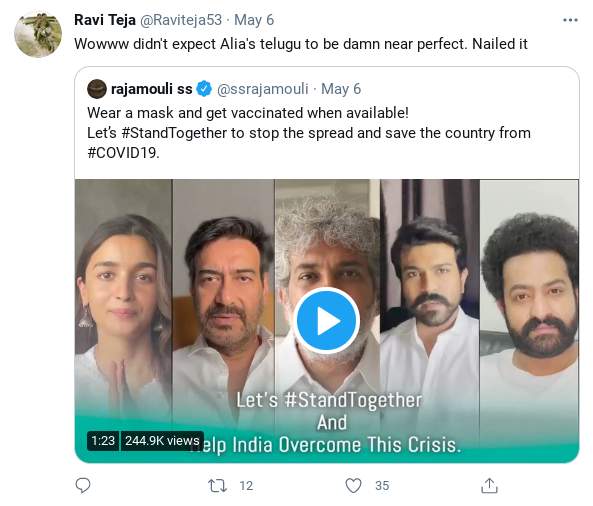 Another netizen commented on the video saying, “Yoooo Alia’s Telugu is better than ppl working in Telugu cinema for decades (sic).” 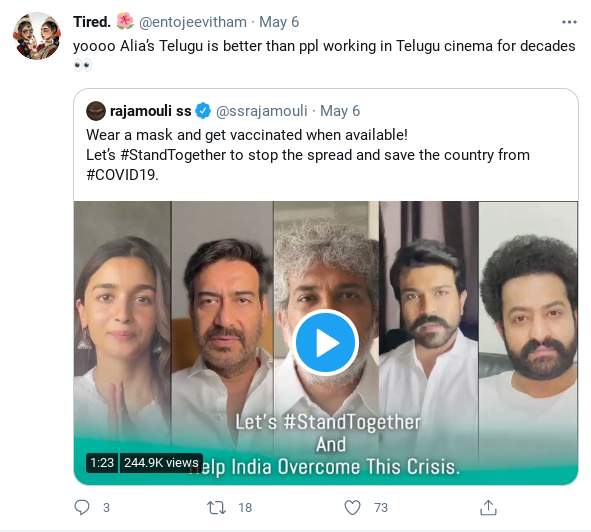 “Respect to Alia Bhat, got her pronunciation spot on. She would have put a lot of work into it (sic),” was another user’s comment.

The movie RRR, which is said to be based on the lives of the south Indian revolutionaries, Alluri Sitarama Raju and Komaram Bheem, is expected to hit the theatres in October 2021.

What do you think about the second wave of the COVID-19 pandemic? Let us know in the comments section below: